Is the "Doctor" of Dr. Oz a branded nickname with no meaning, like the name of the soft drink Dr Pepper? No, that's not true: Before Dr. Oz became a household name as a regular guest on "The Oprah Winfrey Show" and then in 2009, as the host of his own daytime TV show, "The Dr. Oz Show," he was a cardiothoracic surgeon affiliated with New York Presbyterian's Columbia University Irving Medical Center and Weill Cornell Medical Center. He was a professor at Columbia University where he now holds the title of professor emeritus and special lecturer, and no longer sees patients. Since announcing that he is running as a Republican candidate for U.S. Senate in Pennsylvania, "The Dr. Oz Show" has stopped production -- but he still holds a medical license in New York that is valid through May 2024.

Mehmet Oz is about as much of a doctor as a can of Dr. Pepper. -- JON COOPER
CALL TO ACTIVISM 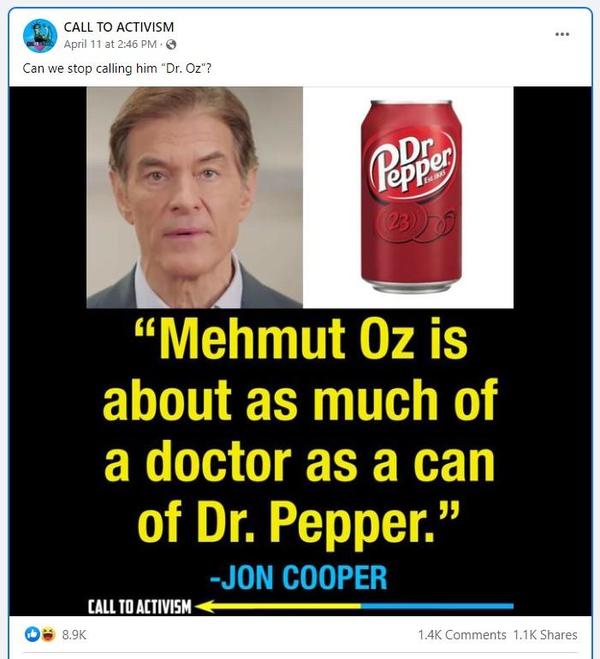 Through the website of the New York State Education Department, the Office of the Professions maintains a database that is the primary source of license verification. As of April 14, 2022, there is a license in the profession of medicine held by "OZ MEHMET CENGIZ" that is registered to the last day of May in 2024. Dr. Oz is a licensed medical doctor.

A January 12, 2022, article on huffpost.com titled, "Columbia University Quietly Changes Mehmet Oz's Position Amid Senate Run" was updated with information from a Columbia University spokesman that Oz became a professor emeritus and special lecturer in 2018. The page for "Mehmet C Oz, MD," which had been maintained on the columbia.edu website, was taken down sometime between January 13 and February 3, 2022. The January 13, 2022, archived copy of the page, which may not have reflected the most current information at the time, lists Oz's board certifications and 31 areas of expertise, including items such as aortic aneurysm, coronary artery bypass, mitral valve prolapse and open-heart surgery.

Another notable change was to the domain owned by Oz, doctoroz.com. Shortly after the November 30, 2021, announcement that he would be running for U.S. Senate in Pennsylvania, in the first days of December, the website, which been the home for "The Dr. Oz Show," became the home of the Senate campaign (before and after) and the TV show was moved to drozshow.com.

As for Dr Pepper, the soft drink was introduced in 1885 in Waco, Texas. The formula served at Morrison's Old Corner Drug Store was not developed by a physician but a pharmacist, Charles Alderton. There are numerous stories about how the soda got its name, but no agreement. The soda's name was originally written "Dr. Pepper" but the period was dropped in the 1950s.