Did California introduce a new bill that would allow mothers to kill their babies up to seven days after birth? No, that's not true: Under California State Assembly Bill 2223, a person would not have a license to kill (LTK) their baby for a week after they're born. The author of the bill suggested an amendment to clarify its immunity provision to say that the suspension of a "civil or criminal liability or penalty" is only specific to an infant's "perinatal death due to a pregnancy-related cause."

https://miamistandard.news/.../california-introduces.../...
-Proverbs 6:16 These six things doth the LORD hate: yea, seven are an abomination unto him:
Proverbs 6:17 A proud look, a lying tongue, and hands that shed innocent blood,
-Proverbs 6:18 An heart that deviseth wicked imaginations, feet that be swift in running to mischief,
-Proverbs 6:19 A false witness that speaketh lies, and he that soweth discord among brethren.
-Matthew 18:6 'But whoso shall offend one of these little ones which believe in me, it were better for him that a millstone were hanged about his neck, and that he were drowned in the depth of the sea.' 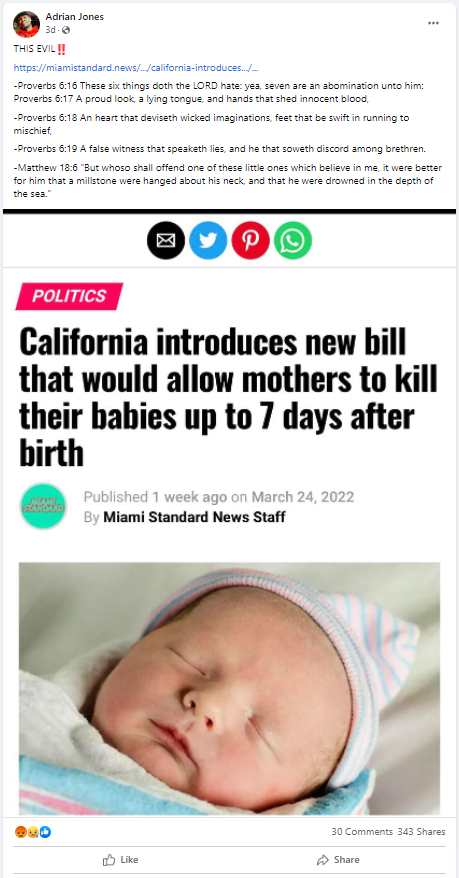 To deal with concerns over the language about "perinatal death" in AB 2223, its author, Assemblywoman Buffy Wicks, offered an amendment to the legislation, which is detailed (page 10) in the bill analysis (download here) from the Assembly Committee on Judiciary:

In order to clarify that the immunity provided by the bill only extends to the deprivation of rights related to pregnancy, the author proposes the following amendment on Page 7, at line 7: insert the words 'under this article' after the word 'rights'.

'Perinatal Death' - Second, the 'perinatal death' language could lead to an unintended and undesirable conclusion. As currently in print, it may not be sufficiently clear that 'perinatal death' is intended to be the consequence of a pregnancy complication. Thus, the bill could be interpreted to immunize a pregnant person from all criminal penalties for all pregnancy outcomes, including the death of a newborn for any reason during the 'perinatal' period after birth, including a cause of death which is not attributable to pregnancy complications, which clearly is not the author's intent.

While the bill does not define 'perinatal,' the term is generally used to describe the period from approximately past 22 (or 28) completed weeks of pregnancy up to 7 completed days of life. (L.S.Bakketeig, P.Bergsjø, 'Perinatal Epidemiology.' International Encyclopedia of Public Health (2008), p. 45.) Welfare & Institutions Code Section 13134.5(b) defines perinatal as 'the period from the establishment of pregnancy to one month following delivery.'

In order to clarify that the bill's immunity provision is only intended to apply to a perinatal death after a live birth when the cause of death is directly attributable to pregnancy, the author proposes the following clarifying amendment on Page 7, at line 10: insert 'due to a pregnancy-related cause' at the end of the sentence. Reflecting both of the above-proposed amendments, the entire subdivision would read as follows:

123467. (a) Notwithstanding any other law, a person shall not be subject to civil or criminal liability or penalty, or otherwise deprived of their rights under this article, based on their actions or omissions with respect to their pregnancy or actual, potential, or alleged pregnancy outcome, including miscarriage, stillbirth, or abortion, or perinatal death due to a pregnancy-related cause.

The bill's future in the California State Assembly is uncertain. On March 21, 2022, the legislation was re-referred to the Assembly Committee on Judiciary, and a committee hearing involving the bill occurred on April 5, 2022. No further action was scheduled at the time this story was published. The is scheduled to adjourn on August 31, 2022.