Did the Disney CEO admit that Disney made "a huge mistake by going woke"? No, that's not true: This article was created by the satirical website, USA Taters. The article falsely states that Disney's CEO is Joe Barron. Walt Disney's CEO is Bob Chapek at the time of writing. There is also an explicit satire disclaimer on the About Us page of this website.

Walt Disney Enterprises LLC made a huge mistake going woke, according to its very own CEO, Joe Barron. Barron says the company made a hasty decision and already regrets it. 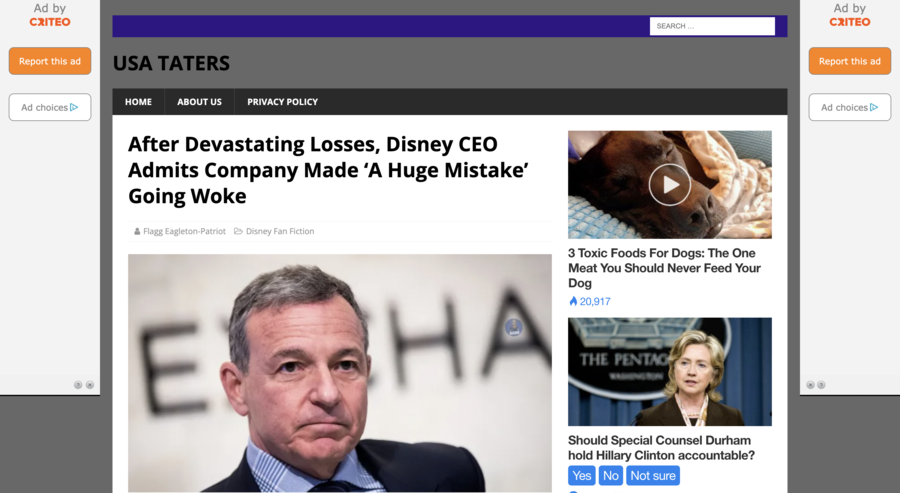 In the first sentence of this article, USA Taters claims the Disney CEO is Joe Barron, a name frequently used on this website's network of satirical sites as a tribute to a writer who passed away some time ago. The current CEO of the Walt Disney company is Bob Chapek, at the time of writing. Chapek has been the CEO since February 25, 2020.

On their About Us page, USA Taters explicitly states that they write fictional content:

Usataters.com is a subsidiary of the "America's Last Line of Defense" network of parody, satire, and tomfoolery ... Everything on this website is fiction.

Here is another Disney claim Lead Stories debunked. Patriot Party Press, another satirical website in the "America's Last Line of Defense" network, wrote that Disney shareholders panicked after a $2.4 billion loss in a single day.