Did Russian leader Vladimir Putin end the Rothschild family's control over Russia by nationalizing Russia's central bank? No, that's not true: Russia has had a central bank for more than 160 years. Alexander II, the emperor of Russia, signed a decree to establish the State Bank in 1860. There's no evidence the Rothschild family, which has built a banking and financial dynasty across Europe, ever controlled Russia, and Putin is not responsible for nationalizing the country's central bank.

Jewish control of major banks and financial institutions is a classic antisemitic conspiracy theory, according to reports from the Anti-Defamation League.

The claim appeared in a Facebook post (archived here) on March 14, 2018, under the headline "JUST INCASE YOU'RE WONDERING WHY THEY HATE HIM..." It opened:

HE ENDED THE ROTHSCHILD'S CONTROL

OVER RUSSIA BY NATIONALIZING THE

GMO'S AND CREATED A CURRENCY TO 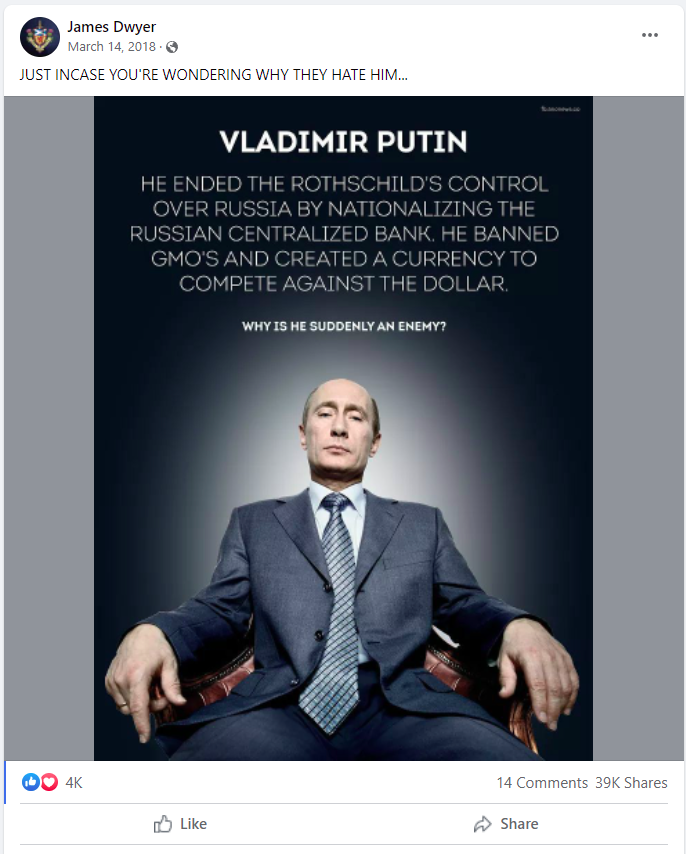 Russia has long had a central bank. The first one was founded in 1860 and was called the State Bank. It has been reorganized many times over the last century and a half and now goes by the name the Central Bank of the Russian Federation, or the Bank of Russia. The State Bank became the Bank of Russia in 1992, eight years before Putin was elected president for the first time in 2000.

The Facebook meme plays into one aspect of a QAnon conspiracy theory, that banks around the world are owned and controlled by a nefarious group of wealthy families. The Rothschild name often tops that list. The online version of Encyclopedia Britannica says this:

As a Jewish family, the Rothschilds have been targeted by conspiracy theorists as a prime example of Jews allegedly using their money to control global financial institutions. These claims have been roundly condemned and proven false, but they continue to persist.

The Anti-Defamation League has published reports regarding the antisemitic conspiracy theories about wealthy Jewish families owning all the world's banks:

In more recent years, the antisemitic notion that 'the Jews' dominate and command the U.S. Federal Reserve System and in effect control the world's money has surfaced across the extremist spectrum.

A section in the report titled "The Rothschild Connection" says, "In the literature of bigots, the name Rothschild is a trigger for the most explosive of antisemitic tremors, and it usually sets off a litany of other Jewish names." The article continues:

In 1983, the charge that Rothschild banks and other international banking concerns, mostly with Jewish names, controlled the Federal Reserve was published (probably from earlier sources) in the newsletter of a local Pennsylvania chapter of the National Association of Retired Federal Employees (NARFE) -- not an extremist group. The article stated that the Federal Reserve System 'is not a Federal entity but a private corporation owned in part by the following: Rothschild banks of London and Berlin, Lazard Brothers bank of Paris, Israel Moses Seif banks of Italy, Warburg bank of Hamburg and Amsterdam, Lehman Bros. bank of New York, Chase Manhattan bank of New York, Kuhn, Loeb bank of New York, Goldman Sachs bank of New York.'

QAnon is an unfounded conspiracy theory that posits, among other things, that former President Donald Trump is waging a secret war against satanic Hollywood elites, Democratic elected officials and business leaders who are running a secret international child sex trafficking ring. QAnon followers receive messages online from an account called "Q" that they believe informs them of the coded messages Trump is sending to signify his accomplishments in the secret war. QAnon supporters believe Trump will oversee arrests of high-powered people for child sex abuse and that he will be returned to a place of power as the president again. They have been referring to something called the "Storm," which will be the moment Trump will expose and punish the international cabal of evil-doers.

Lead Stories has debunked multiple claims made by QAnon supporters including these here and here.