Did Google remove a blur on publicly available satellite maps that had previously obscured details of Russian military installations or high-security areas? Not according to Google: Claims posted on Twitter saying that the company had unblurred sensitive satellite imagery were countered by the official @GoogleMaps Twitter account, which said no blurring changes had been made to the satellite imagery in Russia.

The claim seems to have originated from an April 18, 2022, tweet from the @ArmedForcesUkr account (archived here). This claim was repeated and posted on other platforms, such as this Facebook post published by LADbible Australia on April 18, 2022. The post includes an article summarized as "Google Maps Has Stopped Blurring Russia's Secret Military Sites." The post's caption reads:

The public is now able to look at Russia's aircraft carriers, submarines, nuclear weapons stores and a military airbase.

The account @ArmedForcesUkr was recently suspended by Twitter between April 18 and 19, 2022. The reason for the suspension is not clear. Although it had a very large following, the @ArmedForcesUkr account was not the official account for the Ministry of Defense of Ukraine. The @ArmedForcesUkr tweet, which was retweeted over 2,000 times, said:

Translated to English by Google Translate, the tweet said:

GOOGLE MAPS OPENED ACCESS TO RUSSIA'S MILITARY AND STRATEGIC FACILITIES.
Now everyone can see a variety of Russian launchers, intercontinental ballistic missile mines, command posts and secret landfills with a resolution of about 0.5 meters per pixel.

The official Twitter account @GoogleMaps posted replies to many of the tweets amplifying this message. These replies read:

Hi there, please note that we haven't made any blurring changes to our satellite imagery in Russia. 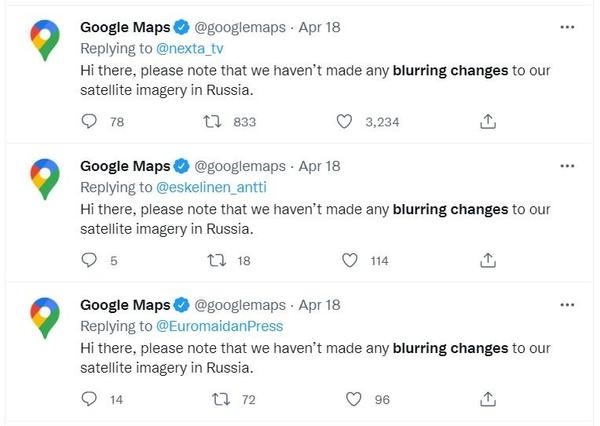 There are some places on Earth that are masked on Google Maps with pixelation or blurs; an independent and partial list of some of these places is compiled in a Wikipedia article. Currently, that list does not include any locations in Russia. To show the difference between a Google Earth satellite view with and without a blur, below is a Lead Stories composite image showing an airport in Greece (38°07′10.0″N 20°30′03.3″E) that is masked with pixelation, alongside four satellite images of the Russian Severomorsk Naval Base (69° 5'2.91"N 33°25'28.83"E) that date back several years. The image will open larger in a new window but is not the same resolution as the original images as they appear on Google Earth.

Lead Stories is not able to independently verify that no changes have been made, either in adding or subtracting blur on any satellite images in Russia, but has reached out to Google for comment and will update this article if appropriate.