Did Nazi scientists create Lyme disease on Plum Island in the 1970s by order of the U.S. government? No, that's not true: There is research from multiple sources that say Lyme disease has been around for thousands of years. Scientists in Italy found a 5,300-year-old mummy who had the oldest known case of Lyme disease, according to genetic tests performed after its discovery. The Plum Island Animal Disease Center in Orient, New York was established in 1954, according to a spokesperson from the Centers for Disease Control and Prevention (CDC). President Richard Nixon outlawed the use of biological warfare in 1969.

The claim appeared in a Facebook post (archived here) on April 13, 2022. This video appears to have originated on TikTok, as the TikTok logo is on the side of the screen. The video opened with:

Was Lyme disease a man-made virus? If you're into conspiracy theories, this one's pretty interesting. And to understand this theory, we have to go back to the end of World War II, when the United States secretly recruited Nazi scientists to help with America's security interests. 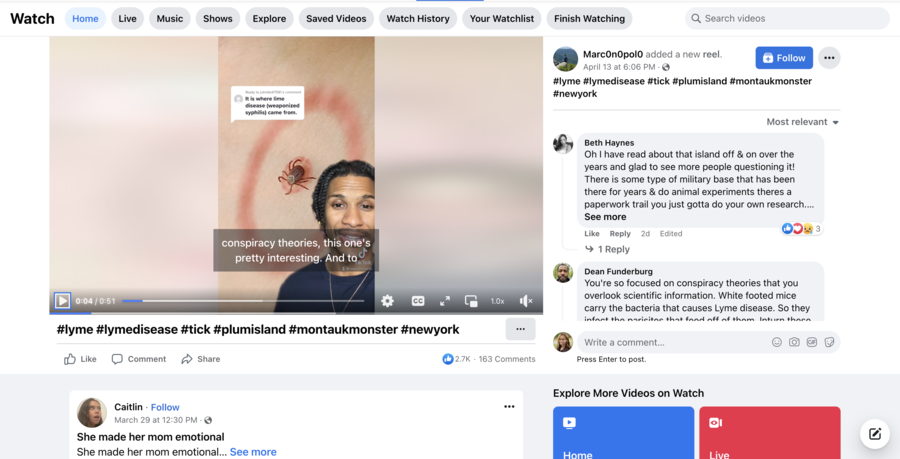 The narrator claims that the United States hired Erich Traub, a former Nazi virologist, to create biological warfare using insects. Traub was then sent to Plum Island to help the U.S. Army create the biological weapon. Through that work, the bacteria that causes Lyme disease escaped the laboratory and was discovered in 1975 in Lyme, Connecticut.

The video does not cite any sources. There is no link to the original TikTok video or any links to prove its claims. We found the TikTok account that originally posted the video, and that creator did not use any source links either.

Researchers at Yale School of Medicine found that Borrelia burgdorferi, the bacterium that causes Lyme disease, existed for at least 60,000 years in the northeastern region of the United States. This means that the bacteria existed well before humans first arrived in North America from across the Bering Strait, which was around 20,000 years ago. The explosion of deer in the 20th century allowed deer ticks that house the bacterium to flourish and invade New England and much of the Midwest, the Yale article said.

Lead Stories reached out to the CDC to ask if the claim that a man-made strain of Borrelia burgdorferi escaped from the Plum Island laboratory was true. On April 19, 2022, an email from the CDC said:

Periodically, rumors arise that implicate the laboratory at Plum Island as the source of Lyme disease in North America. The Plum Island facility was constructed in 1954, in an effort to safeguard against diseases that could damage the U.S. livestock industry. Research indicates that the bacteria that cause Lyme disease existed in the U.S. long before the facility was built.

The Department of Homeland Security Science and Technology Directorate and the Plum Island Animal Disease Control Center do not, and have not studied Lyme disease, since this is a common endemic disease within the United States and impacts humans. Our focus is on studying diagnostics and countermeasures for diseases that are not present in the U.S, but could cause devastating impact to our livestock if there were to be an outbreak in this country ... I will point you to this scientific article on the bacteria that causes Lyme disease being discovered in a mummy more than 5,000 years old.

The 2012 Live Science article details information about a 5,300-year-old "ice mummy" from the Eastern Alps of Italy who appears to have had the oldest known case of Lyme disease, according to genetic analysis.

On November 25, 1969, President Richard Nixon outlawed the use of biological warfare research. These dates also don't line up with the claim that Lyme disease first appeared in 1975 after it "escaped the laboratory."

The video narrator also claims strange creatures wash up on the nearby shores of Plum Island, showing a Google Image result page of "Montauk Monster." Snopes reported on the opinions of a few experts about this carcass. Some said it was a water-degraded raccoon, another a dog or coyote. Lead Stories could not find other such examples of "strange creatures."