Did the Irish Examiner publish a report about a sudden increase in heart problems among sports players due to referee whistles? No, that's not true: A spoof image was created using a fake story and the masthead of the Irish Examiner. This was circulated on social media via a screenshot -- but this article never appeared in the Irish Examiner. A second similar image spoofed the BBC News website with a fake article that said breathing too many times a day could raise your risk of heart attack. That article never appeared on BBC News. These spoofed media images were included in articles critical of the reporting.

Early copies of the spoof Irish Examiner screenshot were posted on Twitter. For example, a tweet by @holmenkollin, an account with a computer-generated face for a profile picture, was captioned in German and a tweet by @Carterj37919661 was captioned in French. Both were posted on February 10, 2022. On February 12, 2022, the screenshot spoof was tweeted by @ElGusty99523701 in Italian. Screenshots of those tweets containing the spoof image were then posted on Facebook (examples here, here and here).

On March 16, 2022, an article (archived here) containing both the Irish Examiner and BBC spoof images was published by zerohedge.com under the title "Referee Whistles May Be Cause Of Sudden Increase In Heart Problems: Experts." It opened:

"Fascism should more properly be called corporatism since it is the merger of the state and corporate power." - Benito Mussolini

Let's go through insurers. This is important because it provides us with some means to understand a potential road map of how we're likely to see all of this play out over the decade. It is going to sound outrageous and there may be some of you who call me a conspiracy theorist, anti-this, that or the other thing, but if you know me by now, you'd also know I don't give a shit. Shocking, I know.
Masking it
They will try to mask it and have begun the neuro-linguistic programming associated with achieving this. 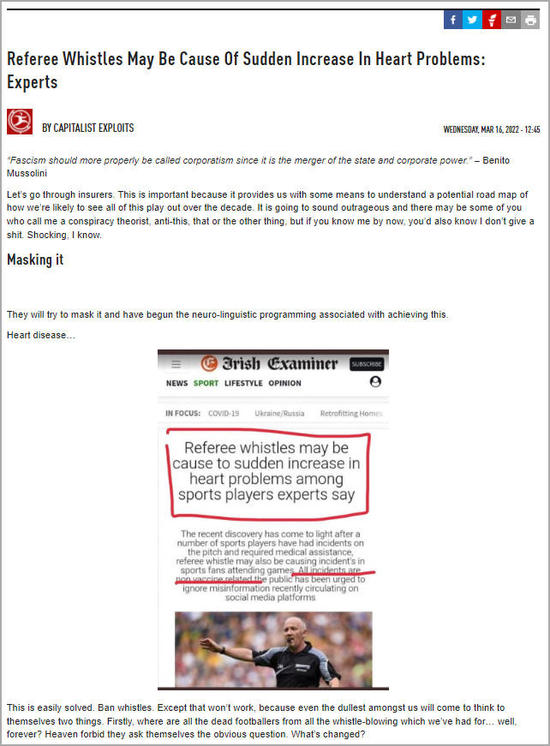 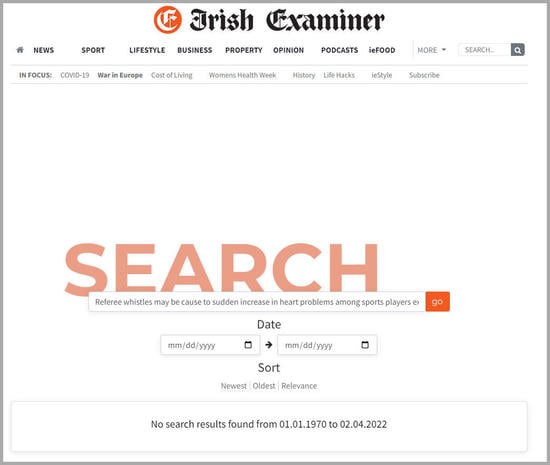 The March 16, 2022, Zerohedge.com article appears to have been the first article using the spoofed screenshots. Several websites republished the zerohedge.com article, and others credited it. On April 1, 2022 (April Fool's Day), newspunch.com published an article, curiously marked with their own in-house "fact checked" icon. This article copied heavily from and credited zerohedge.com. Naturalnews.com published their own article on March 19, 2022. Like the Zerohedge article, it lacks cues of being satire or parody other than the absurdity of the hoax headlines, which is the focus of their apparently genuine criticism.

The Natural News article is titled, "According to the discredited vaccine industry, sports referee WHISTLES the cause behind heart problems in perfectly healthy athletes." It begins:

(Natural News) If you play sports or even attend live sports games and matches, you may want to wear some ear plugs from now on. Otherwise, you might come down with a case of RWS, also known as referee whistle syndrome, where that loud, sharp sound causes your heart to stress out so badly you could have a heart attack and die, according to fake mainstream media (MSM) news and vaccine industry 'experts.'

The Zerohedge article was built around four screenshot images shown in the Lead Stories composite image below. Two of the screenshots are genuine -- from a tweet from the Centers for Disease Control and Prevention and The Guardian (below right). The Irish Examiner and BBC News articles (below left) are fictional spoof images of unknown origin. Mixing truth and lies, the authentic screenshots with fabricated images, like the straw man, are standard disinformation tactics. The BBC News spoof headline reads:

Trial found that people who breathe more than 5 percent above the daily average had a rise in blood pressure and increased risk of myocarditis.

Lead Stories found a large number of websites showing indications of affiliation with Natural News that republished the same article. 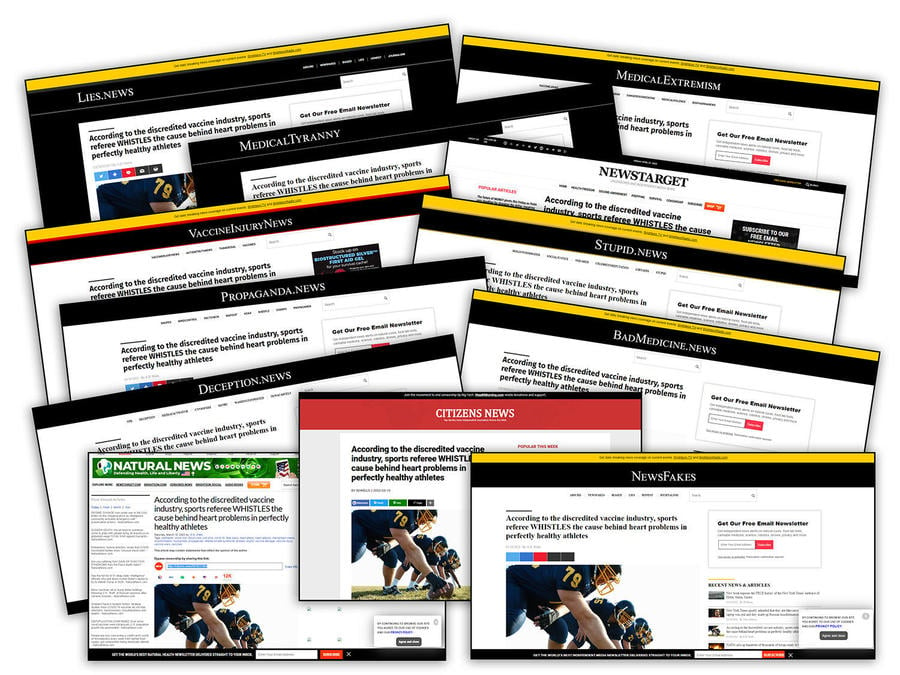 Lead Stories has written about reports and speculation regarding the causes for athletes collapsing here, here and here.

Several fact check outlets, apnews.com, reuters.com and africheck, issued debunks in February 2022 regarding the BBC News spoof, which seems to have appeared on Twitter at the same time as the Irish Examiner spoof.