Doctors I've heard speaking say there is no way to help people who have taken the c-shots. I disagree! My theory is that a keto diet could alleviate the issue with the spike protein that is produced by them. Proteins and other nutrients are absorbed and stored in fat tissue. The spike is exactly that, a protein. Theoretically, being in ketosis (body using fat instead of carbs as energy) could expel spike proteins that would otherwise be absorbed by fat tissues, as you're burning that fat off as fuel. 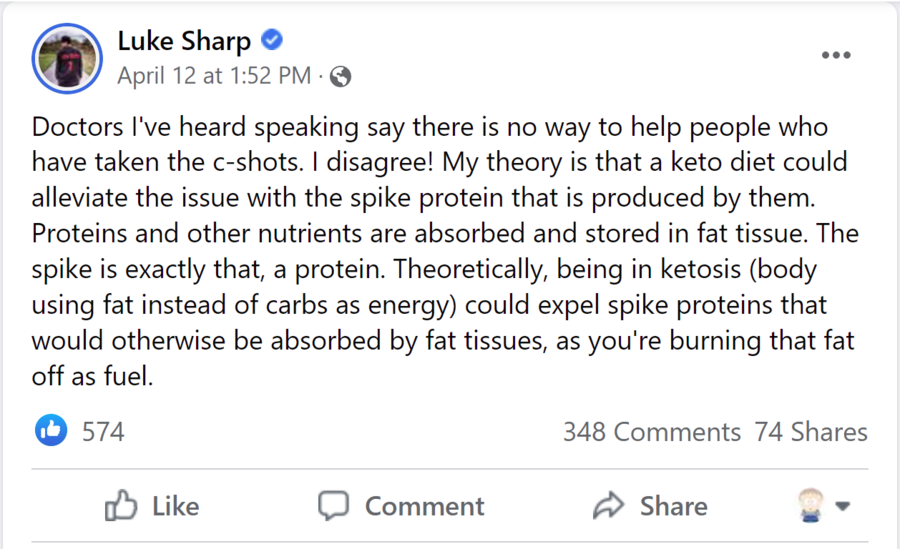 On Sharp's Facebook page, he identifies himself as an independent recording artist, a journalist and a video game streamer. He doesn't have a medical degree. The bio on his website lists his credentials:

In an April 27, 2022, email to Lead Stories, Dr. James Lawler, an infectious diseases expert at the University of Nebraska Medical Center, addressed the claims implied or stated in Sharp's post.

1. Doctors are concerned that the COVID-19 vaccines are dangerous, and people who received them require help:

This is false. The vast majority of physicians have seen the data that confirm that the 3 vaccines used in the US have safety profiles that are in line with other routine vaccines. No drug or vaccine is completely without potential side effects. However, COVID vaccines have a low rate of adverse events and offer excellent protection against developing significant illness from COVID-19, which is associated with a very high rate of complications and long-term health issues. 570 million doses of COVID vaccine have been given to Americans, and over 11.5 billion have been given worldwide. We have over 18 months of data from clinical trials and real-world use that indicate these vaccines are safe and effective.

2. Doctors are worried about spike protein in recipients of the vaccines:

This is also false. The three vaccines we use in the US create immunity by using your own cells to produce the spike protein of the COVID virus. We actually WANT spike protein to be produced, so that your body will create an immune response to spike. Then when you encounter the real virus, which is covered with spike protein, your immune system will recognize this foreign invader and eliminate it quickly, preventing infection; or at least preventing severe infection.

3. Spike protein (and other circulating proteins) are stored in significant quantity in adipose (fat) cells:

You will be surprised to hear that this, too, is false. Will talk about the properties of the mRNA vaccines, since they are most common, but the adenovirus (J&J) vaccines are similar. The mRNA is absorbed by cells at the injection site and then used by your cells' normal protein manufacturing process to make spike protein. The mRNA is degraded very quickly, so the spike protein production happens only for a short time - on the order of a day or two. The spike protein sticks around for a bit longer than the mRNA, but it is eventually cleared by the body's normal scavenging processes, like other proteins. Clearance of spike protein is accelerated by the body's immune response, as antibodies binding to spike protein in blood and tissues will enhance removal. Most spike protein is gone by two weeks after the first dose of vaccine. After the second dose, it appears to be cleared even quicker, due to the body's accelerated immune response.

4. 'Keto diet could alleviate the issue with the spike protein':

Debate about ketosis inducing diets is out of the scope of this fact-checking. They have been shown to be effective for some medical conditions (eg seizure disorder) and temporary weight loss, and there are intriguing metabolic effects of ketogenic diets. I would not recommend them as a strategy related to COVID vaccines or COVID. But keto diets clearing 'bad' proteins and toxins out of adipose tissue is not really a science-based concept.

The Centers for Disease Control and Prevention includes this information on its COVID-19 page: