Did the government of Hawaii announce that it is "importing 174 adult saltwater crocodiles from Australia" to reduce the number of shark attacks? No, that's not true: A spokesperson for the Hawaii Department of Land and Natural Resources told Lead Stories that such a claim is "totally false." Also, the claim came from a self-described entertainment website.

The claim appeared in a Facebook post by the unofficial site The State of Hawaii on May 30, 2020. Above the image of a crocodile on a beach, the caption opened:

We are in the process of importing 174 adult salt water crocodiles from Australia. Over the last few years we have had numerous shark attacks across the state that have resulted in injury and death, we need to do something to stop them.

Studies in Australia have shown that over the last 40 years not one single shark attack has occurred near beaches where salt water crocodiles are present. Sharks do not like crocodiles. So by bringing these majestic animals to Hawaii's waters we will hopefully get the same results, making Hawaii beaches safer. 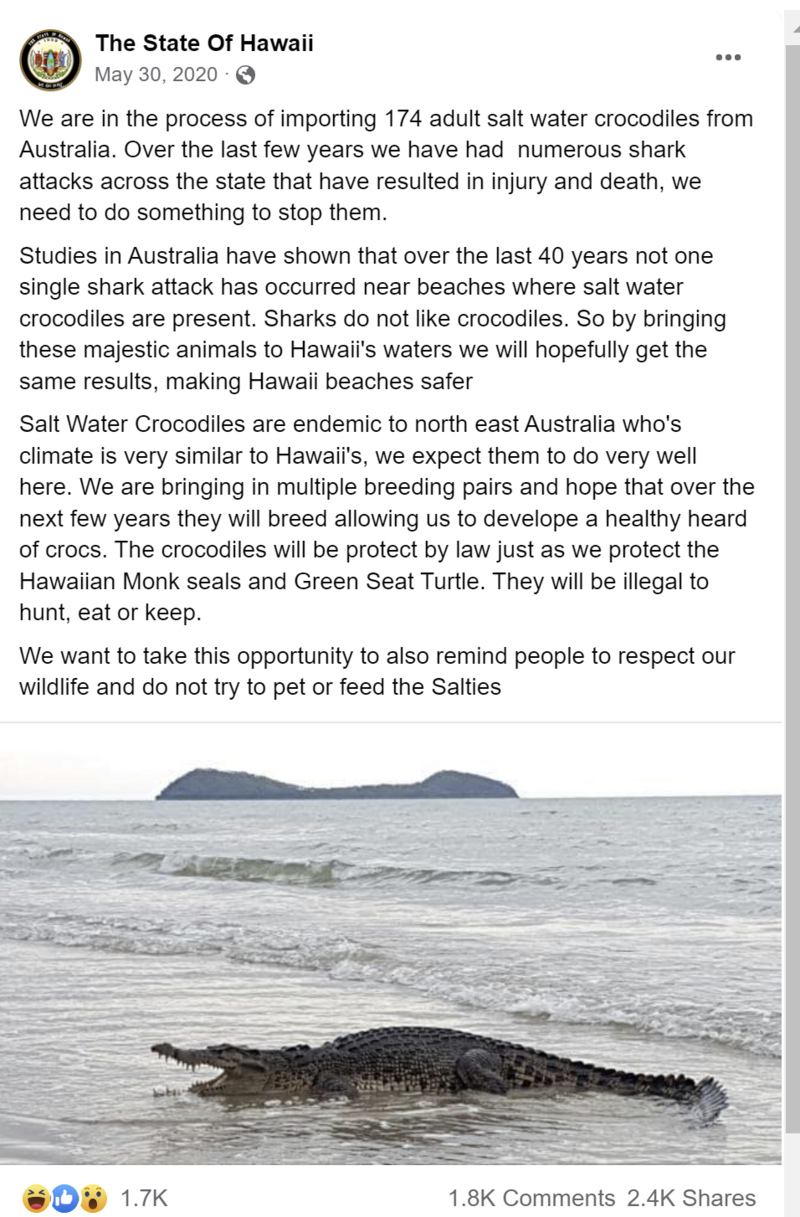 Salt Water Crocodiles are endemic to north east Australia who's climate is very similar to Hawaii's, we expect them to do very well here. We are bringing in multiple breeding pairs and hope that over the next few years they will breed allowing us to develope a healthy heard of crocs. The crocodiles will be protect by law just as we protect the Hawaiian Monk seals and Green Seat Turtle. They will be illegal to hunt, eat or keep.

Dan Dennison, communications manager at the Hawaii Department of Land and Natural Resources, responded to an inquiry from Lead Stories via email on April 27, 2022, regarding the post:

There are no Crocs in Hawaii, so totally false.

The source that published the claim is The State of Hawaii, which says at the top of the page it is an "Entertainment Website." While the official Facebook page for the government of Hawaii shows the state seal in the upper left corner, The State of Hawaii page shows a mock seal with a surfboard in the center and "WE GO SURF" written under the board.

Official information NOT from the city and county of Honolulu.