Is Snickers removing the "beloved 'dick vein'" from their candy bars? No, that's not true: Snickers said on Twitter, "THE VEINS REMAIN!" The edited image is a spoof of Fox News Channel TV host Tucker Carlson and cancel culture.

The claim appeared in a Facebook post (archived here) on April 24, 2022, under the title "He's just mad cause he can't see the nuts. He loves dem nuts." It opens: 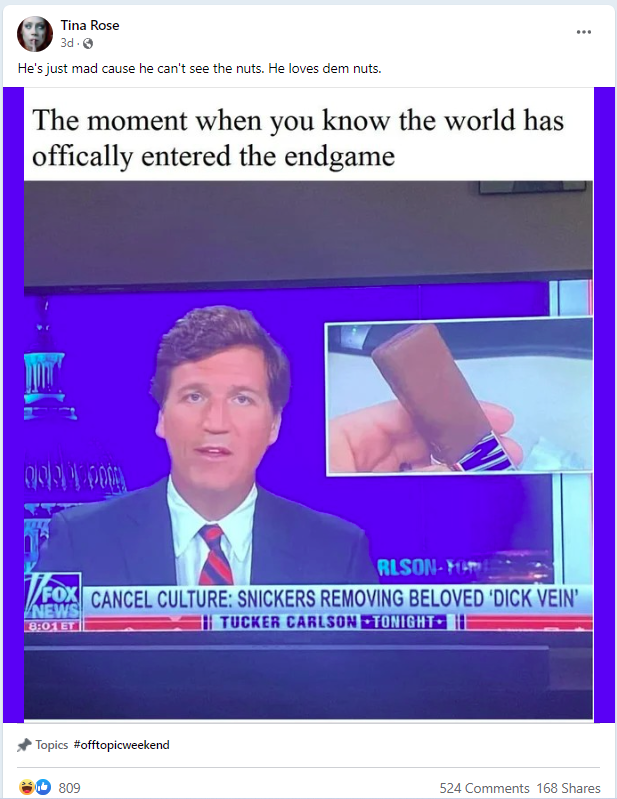 While there's no evidence Carlson ever went on a rant about Snickers on his show or that he ever created a meme spoofing the candy bar, he did rage about M&Ms after Mars Incorporated -- the maker of both candies -- said it was redesigning the M&M mascots to show the company's "commitment to creating a world where everyone feels they belong and society is inclusive."

We're on a mission to create a world where everyone feels they belong using the power of fun! Join us in being for all funkind. #ForAllFunkind Check out https://t.co/Mq7wG9sX8v for more! pic.twitter.com/IzWI5wgW4S

One of the changes was to take the green M&M out of her go-go boots and put her in sneakers:

Did my shoes really break the internet? pic.twitter.com/ZaisgZ9QYZ

M&M's will not be satisfied until every last cartoon character is deeply unappealing and totally androgynous. Until the moment you wouldn't want to have a drink with any one of them. That's the goal. When you're totally turned off, we've achieved equity. They've won.

The "dick vein" posts were already making the rounds on social media (here and here) when on April 16, 2022, @JUNlPER, who goes by Transgender Marx on Twitter, tweeted a doctored version of a news story that kicked the trend into viral high gear, Rolling Stone reported, which appears to have inspired the meme about Carlson:

But, Snickers said on Twitter, there's no need to worry. Their confection is not going smooth: "THE VEINS REMAIN!"