Is the proposed bill in Tennessee that would create a common-law marriage between "one man" and "one woman" actually intended to pave the way for adults to marry children of any age? No, that's not true: According to the sponsor of HB 233, Rep. Tom Leatherwood, the bill is intended to create a form of marriage for just adult men and women. Originally the bill did not have age restrictions but that has now been amended to include the phrasing, "if both have attained the age of majority," which in Tennessee is 18 years old.

SB 562 / HB 233 received a lot of attention in the press and on social media in early April 2022. Much of that attention was focused on the original lack of an age restriction, which was characterized as a way to legalize child marriage and cover up child sex abuse. One example of this can be seen in a meme published on Facebook by Occupy Democrats on April 7, 2022. It was captioned, "Follow Occupy Democrats for more." The text in the image reads:

WHY IS THE REPUBLICAN PARTY TRYING TO LEGALIZE PEDOPHILIA?
SOURCE: GOP bill would eliminate age requirements for marriages in Tennessee. WJHL.com. 3.29.2022 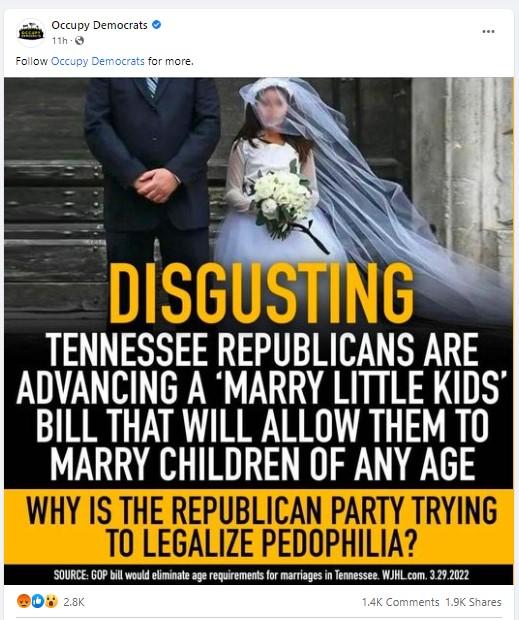 The fine print at the bottom of the meme names the source as a WJHL.com, March 29, 2022, article titled, "GOP bill would eliminate age requirements for marriages in Tennessee." The headline of the article gives the impression that the purpose of the bill is to get rid of marriage age requirements. The article focuses primarily on concerns about the lack of an explicit age limit in the text of the bill. A follow-up article on April 6, 2022, included additional context about the bill's intent and quotes from sponsor Leatherwood:

Critics of the bill say it's aimed at creating a new marriage system for heterosexual couples.

'Marriage is between a man and a woman and this would create a marriage certificate reflecting that and so it will have a form that just reflects that,' Leatherwood said in committee.

But an amendment added to the bill after backlash added an age limit of 18 after previously not having one. Leatherwood, the bill's sponsor, says some people didn't understand the intent. 'Some legitimate concerns, others were looking for indirect ways to work against the bill and that's fine, that's the political process.'

The Tennessee House Civil Justice Committee met on April 6, 2022 (view HB0233 discussion at 1:05:13 in video). Amendment No. 2 was adopted, and the committee discussed the bill until they ran out of time. The bill was put on the calendar for April 13, 2022. The amendment added wording to the text of the bill about a minimum age. It reads in part:

by deleting the first sentence of Section 36-3-202(a) in SECTION 2 and substituting instead the following:
One (1) man and one (1) woman, if both have attained the age of majority, may file with the office of the county clerk in the county in which one (1) of the parties to the marital contract resides a document entitled 'Record of Marital Contract at Common Law.'