Does a video on social media show the Russian warship Moskva -- the English-letter spelling of the Russian term for "Moscow"-- being hit by a missile before later sinking in the Black Sea? No, that's not true: The 10-second clip comes from a longer video posted in 2013, showing the Norwegian military testing a Naval Strike Missile off the coast of Norway. The video's description says the test was carried out on a decommissioned frigate.

The claim appeared in a video (archived here) published on Twitter on April 14, 2022. It opened:

💥 How "Moscow" burns: a video of the explosion of a Russian cruiser after being hit by a Ukrainian missile was published by the founder of the Azov Regiment, Andriy Biletsky 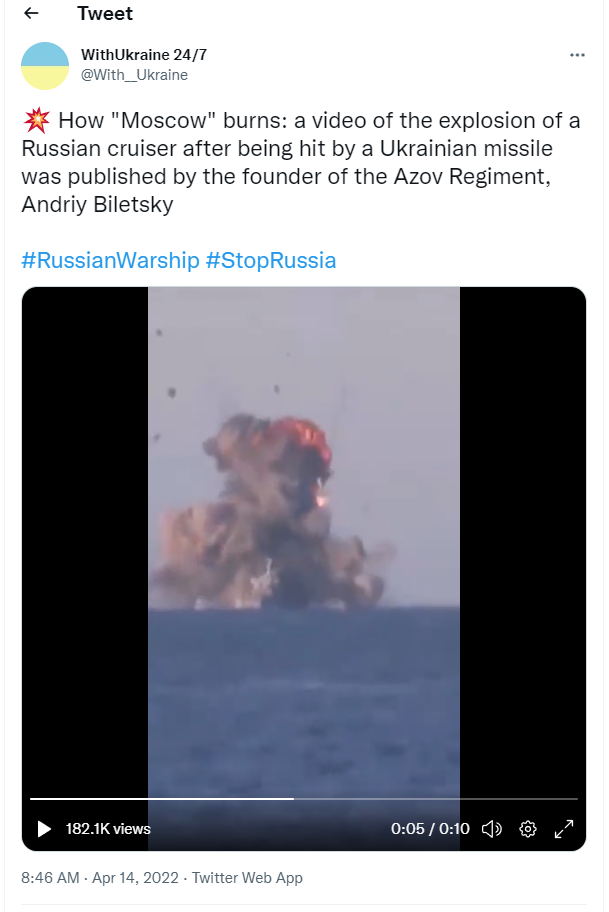 The social media video purports to show a Ukrainian missile attack on the Russian missile cruiser Moskva, the flagship of the nation's Black Sea fleet, which reportedly sank while being towed to port on April 14, 2022. The circumstances surrounding the ship's demise are disputed. Ukrainian officials said their forces hit the ship, as did the U.S. Defense Department, but Moscow only acknowledged a fire on board. Russia's Defense Ministry said the fire caused ammunition on board to detonate, severely damaging the ship.

This is the 10-second clip showing the alleged attack:

💥 How "Moscow" burns: a video of the explosion of a Russian cruiser after being hit by a Ukrainian missile was published by the founder of the Azov Regiment, Andriy Biletsky#RussianWarship #StopRussia pic.twitter.com/KGnsc7WDrK

The same clip can be found, starting at the 37-second mark, in a much longer video titled "Norwegian Navy Test Missile Strike" and posted to YouTube in 2013 by the South West News Service, a news agency and media company based in the United Kingdom and the United States. The edited version of the video has been cropped to make look like it was shot from a cell phone and is also a mirror image of the original.

This is what the video's description says:

This is the dramatic moment a ship is blown up to demonstrate a powerful new missile. The Norwegian armed forces took a decommissioned frigate out into the sea for a game of target practice. They then fired the new 'Joint Strike Missile' at the vessel with pinpoint accuracy, causing a huge explosion and major damage to the vessel.

Bradley Martin, a senior policy researcher with RAND Corporation, analyzed the video for Lead Stories. In an April 15, 2022, email, he confirmed the findings:

The quick answer is that nothing in the Youtube video is the Moskva. What's hit would appear to be a target for a missile test, likely a decommissioned naval vessel.

Military.com also shared a story about the original missile test and the same video.

The edited video was shared by Andriy Biletsky, a Ukrainian white nationalist far-right politician and the leader of the political party National Corps.