Was PepsiCo ever the "6th most powerful military in the world"? No, that's not true: A University of Massachusetts Amherst professor tells Lead Stories, "The statement is false on several details."

While portions of this claim have been reported since at least 1989 as historically accurate, there are details surrounding it that were not clarified until at least 2018.

The claim appeared in a Facebook post on the page of The Infographics Show, on May 19, 2022. The post, which included the caption, "Did you know?" featured a black and white photo of Soviet leader Nikita Khrushchev (far left) drinking from a cup labeled Pepsi while former U.S. Vice President Richard Nixon observes. The text below this image reads:

THE MILITARY POWER OF PEPSI
In 1959, Khrushchev tried Pepsi for the first time. He liked it so much that he wanted to bring Pepsi to the Russian people, though the ruble wasn't yet accepted throughout the world, so he paid with vodka instead. This worked until their agreement expired in the late 1980s. Russia then traded Pepsi a fleet of 17 submarines, a cruiser, a frigate, and a destroyer for $3 billion worth of Pepsi, making Pepsi the 6th most powerful military in the world. Soon after, Pepsi sold the fleet to a Swedish recycling company. 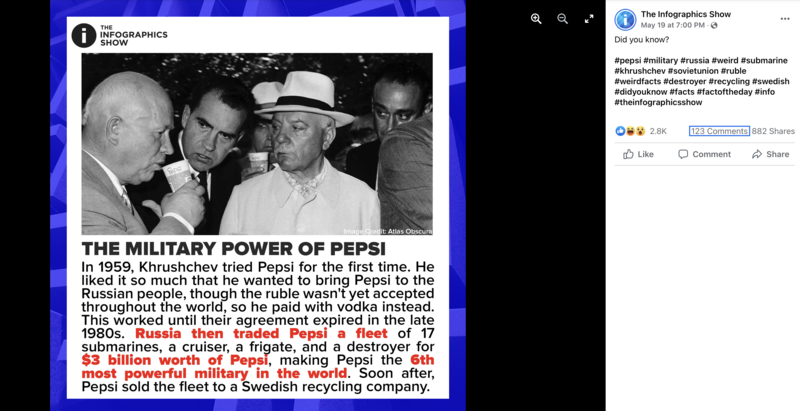 Similar information and the photo seen in this post have been found in various news articles over the years. It showed up more recently in this November 27, 2021, Foreign Policy article titled, "The Doomed Voyage of Pepsi's Soviet Navy," which concluded that the sixth largest military claim in the Facebook post as well as similar claims are false.

Lead Stories reached out to Paul Musgrave, a political science professor at the University of Massachusetts Amherst who wrote the Foreign Policy article. In a May 23, 2022, email, he wrote that this post is false in several details. According to Musgrave:

Musgrave shared the blog post he published on November 29, 2021, titled "Did Khrushchev Like Pepsi? An Investigation" proposing that Khrushchev merely established trade with PepsiCo as a publicity stunt -- ultimately establishing cordial relations between the U.S. and the Soviets during a tense time historically.

The New York Times extensively covered the trade and barter between PepsiCo and the Soviet Union in 1959, 1972 and 1990. The submarine deal was born out of financial trading -- not a food-and-drink institution trying to establish military power.