Did Wilhelm Reich invent a way to cure cancer and many other ailments -- simply by sitting a patient in an "Orgone Accumulator" box for a few sessions? And did the Food and Drug Administration (FDA) ban the invention and sentence Reich to prison, where he died? The first part of this claim is not true: Reich never claimed that he had found a cure for cancer, although that accusation was part of the FDA's case against him under the Federal Food, Drug, and Cosmetic Act. That resulted in the issuing of an injunction on March 19, 1954. Reich was imprisoned on March 12, 1957, not for his invention, but for refusing to comply with the court's order. He had been sentenced to two years in prison, but died of heart failure on November 3, 1957, shortly before a parole hearing less than eight months into the sentence.

Many myths and misrepresentations about Reich's life and work have appeared in books, online articles, YouTube documentaries, movies and on social media. In a Facebook post on the page Altered States on May 14, 2022, one of the myths was repeated again. The post was not captioned but the text within the image reads:


In the 1900's, a man named Wilhelm Reich invented a way to cure cancer, heart disease, arthritis and thousands of other ailments, within a few 15 minute sessions of sitting in the box above. How was this possible? The 'box' is a carefully crafted 'Orgone Accumulator', which concentrates Orgone energy or "Chi / Prana" life force energy, and this has an incredible effect on patients. The FDA banned Wilhelm's inventions and sentenced him to prison where he died in 1957. 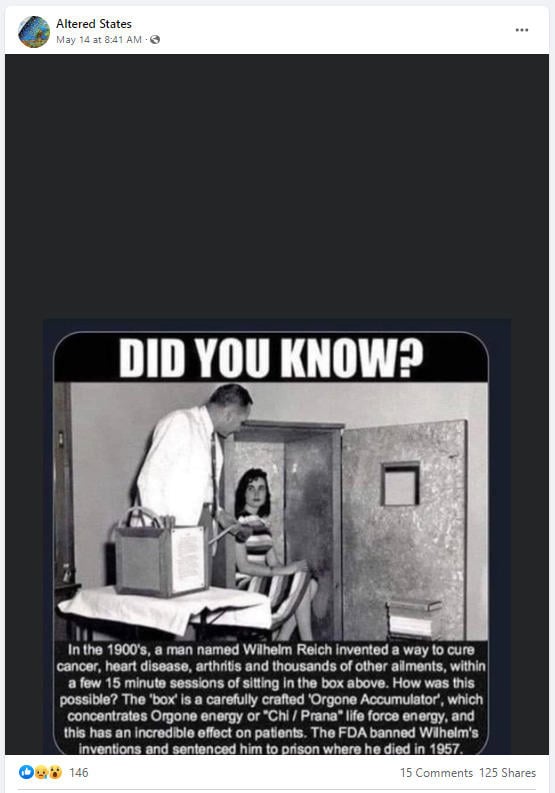 Reich was born in Austria in 1897 and in his early psychoanalytic career worked with Sigmund Freud. He was interested in the biology of sexual experience. His observations took him to other scientific disciplines as he researched his theories about things as far ranging as the origin of life and controlling the weather.

Lead Stories called James E. Strick, a science historian and associate professor in the department of earth and environment at Franklin and Marshall College in Lancaster, Pennsylvania who wrote the book, "Wilhelm Reich, Biologist." The two most problematic and persistent misconceptions about Reich are that he claimed he could cure cancer and that the Orgone Accumulator was some sort of a sex box, Strick said on May 23, 2022. Neither is true.

Reich never claimed that he could cure cancer. While he felt his experiments in 1941 on both mice and humans were promising, Strick explained, in many cases the subjects who showed the most dramatic reduction in the cancer were sickened by acute inflammation of their liver and kidneys. The treatment was not merely a few sessions, and for the human volunteers the experimental treatment also included psychotherapy. Doctors had deemed their cases terminal. The human volunteers signed an affidavit that they understood Reich's therapy was experimental and there was no promise of a cure.

Strick estimates there were less than 20 people involved in these experiments and except for one, they all died. Reich had hoped this research might lead to means of preventing cancer. In the book "Experimental Orgone Therapy Of The Cancer Biopathy (1937-1943)" (in chapter 9, on Page 54) Reich describes the "Results Of The Experimental Orgone Therapy in Humans, 1941-1943":

I shall emphasize the disappointments and failures. It is most important for us to prevent the impression that we possess a cure-all, a means of 'curing' cancer under all circumstances. If one is to develop the beneficial effects of the orgone, an understanding of the failures is indispensable.

Reich outlined many of his laboratory observations and experiments from the 1930s in "The Discovery of the Orgone" (starting on page 10 of the pdf). He observed reactions in his laboratory such as skin irritations, headaches, eye irritation, magnetized utensils and fogging of photographic plates. By 1940 he devised a sheet metal-lined box with walls made of alternating layers of materials such as wool and steel wool. The box, called The Orgone Accumulator (pictured in the meme), was large enough to hold a seated person. Reich believed that this design would attract and hold "primordial, pre-atomic cosmic orgone energy" that is present everywhere.

As a "Response To The Complaint" from the FDA regarding the Orgone Energy Accumulator, Reich wrote a letter to Federal Judge Clifford on February 25, 1954. In this five-page letter Reich defends the scientific method and states that his reason for refusing to appear in court to enter a case to defend himself is that he does not recognize judicial authority over science (page 539):

Inquiry in the realm of Basic Natural Law is outside the judicial domain of this or ANY OTHER KIND OF SOCIAL ADMINISTRATION ANYWHERE ON THIS GLOBE, IN ANY LAND, NATION OR REGION.

Man's right to know, to learn, to inquire, to make bona fide errors, to investigate human emotions must, by all means, be safe, if the word FREEDOM should ever be more than an empty political slogan.

The FDA considered the concept of orgone energy to be quackery, calling it "alleged orgone energy" throughout the text of the March 19, 1954 legal injunction. It deemed the Orgone Accumulator devices to be misbranded and adulterated and required Reich and his employees to cease shipping any in interstate commerce. They were to recall and destroy any devices that had been sold or rented out of state. It also called for the destruction of printed matter that mentioned orgone energy, orgone energy accumulators or how to build one.

It was an associate of Reich, Michael Silvert, who was responsible for violating the injunction and shipping something across state lines. After this failure to comply with the injunction the government oversaw the destruction of the Orgone Accumulators, and on August 23, 1956, tons of Reich's books were burned in the Gansevoort Incinerator in Manhattan at the direction of U.S. Marshals. Reich and Silvert were both sentenced to time in prison. Reich died in prison on November 3, 1957.