Did Ukrainian soldiers turn back a Russian incursion with paintball guns? Did Reuters represent a photo of soldiers training with paintball gear as an actual military conflict? No, that's not true: The photo originally included in a May 16, 2022, article was captioned to reflect that it showed a training simulation in Sumy, Ukraine, on April 15, 2022. This caption was only visible when viewing the full article on the reuters.com website, which was linked in the tweet. However, the photo's caption was not visible when viewing the image on Twitter.

Those are paintball guns, Reuters 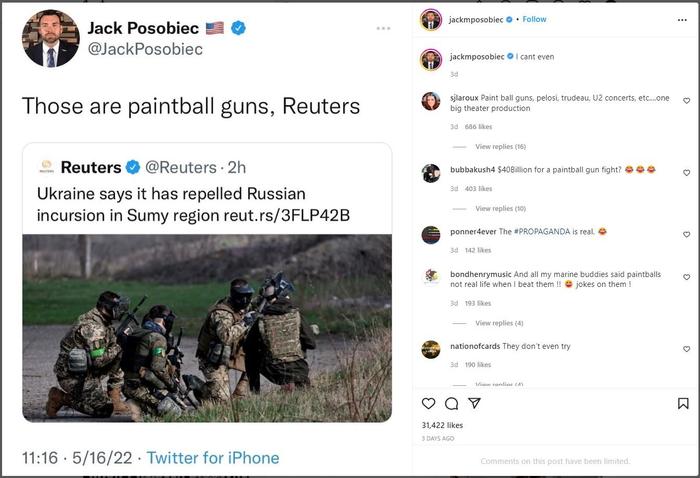 The image of the soldiers training with paintball gear coupled with the headline of the article has made Reuters the subject of some criticism. There are even baseless musings that the paintball gear proves the war in Ukraine might not even be real at all. When a screenshot is taken and a link becomes unclickable, the full context is lost. In this case what was lost was the caption, which made it clear these soldiers were training. Another issue is that updating the photo in the article does not change the photo displayed in the tweet.

The Reuters tweet links to a May 16, 2022, reuters.com article titled, "Ukraine says it has repelled Russian incursion in Sumy region." The article relays information posted to the Telegram messaging app by Dmytro Zhyvytsky, the governor of the Sumy region.

Dmytro Zhyvytsky wrote on the Telegram messaging app that the Russian group entered Ukrainian territory under the cover of mortar shells, grenades and machine gun fire but retreated after the border guards fought back.

Archived copies of the article show that it has been updated several times. The first copy of the article on the Internet Archive's Wayback Machine shows that the article had already been updated an hour before that snapshot was taken. It is not evident what had been changed. The article includes the photo of a group of soldiers with paintball gear and green armbands that is captioned: 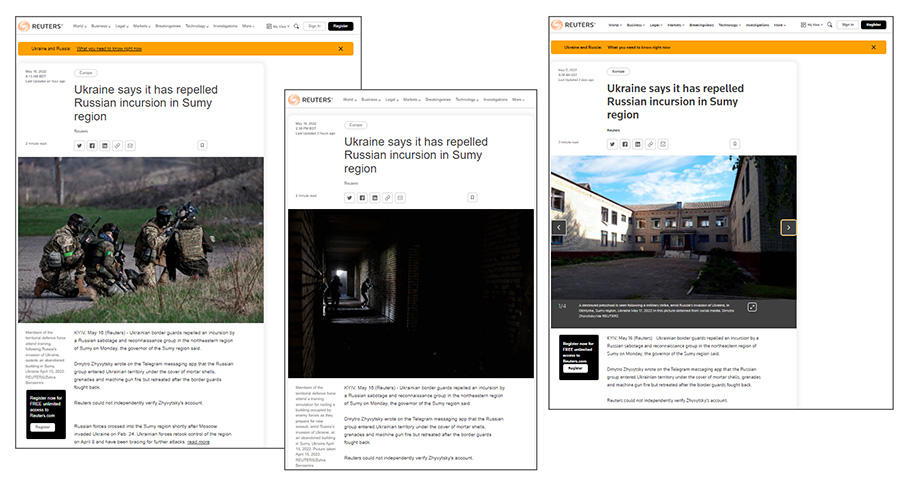 The collection of press photos from that April 15, 2022, training can be seen in Reuters Pictures gallery. The Wayback Machine archive shows the photo included with the article was changed to another image from that same training exercise later in the day on May 16, 2022. This second photo shows soldiers at a distance inside a dark interior space. It is captioned:

Members of the territorial defence force attend a training simulation for raiding a building occupied by enemy forces as they prepare for new assault, amid Russia's invasion of Ukraine, at an abandoned building in Sumy, Ukraine April 15, 2022. Picture taken April 15, 2022. REUTERS/Zohra Bensemra

At the time of writing on May 19, 2022, the article reflects yet another change -- instead of a single photo at the top of the article, there is now a carousel of four. The first three photos show damaged buildings and the fourth is the training exercise from the previous update. Lead Stories has reached out to Reuters by email and will update this article if appropriate.