Did witnesses capture footage of a UFO over the Pentagon in December 2018? No, that's not true: A spokesperson at the Pentagon described the claim by telling Lead Stories, "This appears to be a hoax. There were no reports of unusual activity at the Pentagon for the date claimed in the alleged sighting." An artist who was credited with creating the images said in a tweet in 2019 it was "for the purpose of opening a conversation."

12/19/18 - The Pentagon, Washington DC: A Triangular / Pyramid UFO was captured from at least 3 different perspectives over the D.O.D. last December. 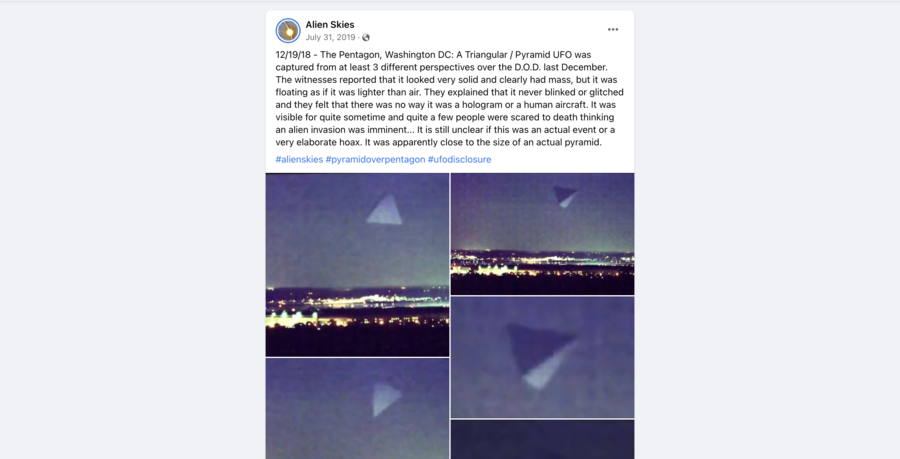 Lead Stories' research turned up a message board post on projectavalon.net that said it was artwork created by a CGI artist.

That artist is Adyor Vanderlei. Vanderlei claimed ownership on Twitter of what appeared to be possibly CGI images, and he noted that "Volta Seven Studios" helped with the creation. The tweet read:

curtsy by VOLTA SEVEN studios for the purpose of opening a conversation. Artist ADYOR helped us out with this and many more spanning from 2011-2018#lookwup https://t.co/EIieTg1URz

When Lead Stories reached out to Vanderlei for this story, he responded by email on May 19, 2022, saying he had "lied" earlier. "I DID NOT make this on cgi ... I have nothing to do with this," Vanderlei said.

Lead Stories was not able to definitively determine the source of the images through internet searches.

Lead Stories reached out to the Pentagon, where a spokesperson said in a May 19, 2022, email that the images appear to be a hoax. The spokesperson added, "There were no reports of unusual activity at the Pentagon for the date claimed in the alleged sighting."