Is it true that Warsaw is going to send troops to the western parts of Ukraine to repossess the lands Poland used to own in the distant past? No, it's not true. Claims about the allegedly planned Polish invasion of Ukraine started to spread on social media on April 28, 2022, following the statement made by Sergei Naryshkin, the head of Russia's Foreign Intelligence Service. No evidence was supplied. Warsaw called it disinformation. The U.S. State Department said that such claims are a part of "an obvious ploy by the Kremlin to falsely justify" its attacks against Ukraine.

One of the most recent English-language variations of this claim was posted on Twitter on May 30, 2022 (archived here). The tweet reads:

If Poland invades Ukraine from the East, it would probably rationalize it as a way to keep Russia from gaining all of Ukraine's territory and putting Kiev and/or Lviv under the NATO nuclear umbrella. 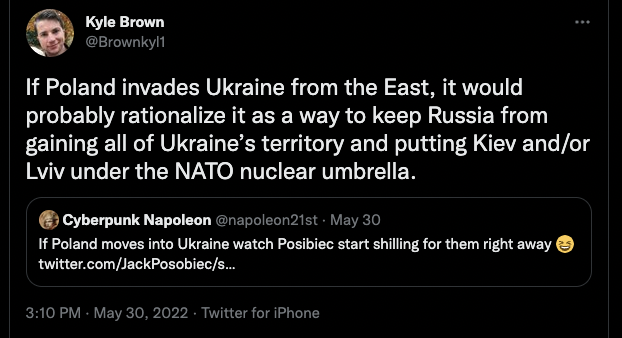 Five days earlier, Samuel Ramani, a geopolitical commentator and an associate fellow at the Royal United Services Institute in London, retold the same claim on his feed, attributing it to Alexander Dugin, once described by the Washington Post as "the far-right mystical writer who helped shape Putin's view of Russia."

According to a Lead Stories analysis, such posts on social media began to circulate on April 28, 2022, when Sergei Naryshkin, the chief of SVR, Russia's Foreign Intelligence Service, released an official statement titled "On Polish Claims to Western Ukraine." The opening paragraph claimed: "According to information received by the Russian Foreign Intelligence Service, Washington and Warsaw are working on plans to establish tight military and political control of Poland over 'its historical possessions.'" The SVR press release continued: "The first stage of 'reunification' should be the introduction of Polish troops into the western regions of the country under the slogan of 'defense against Russian aggression.' Modalities for the upcoming mission are currently being discussed with the J. Biden administration." 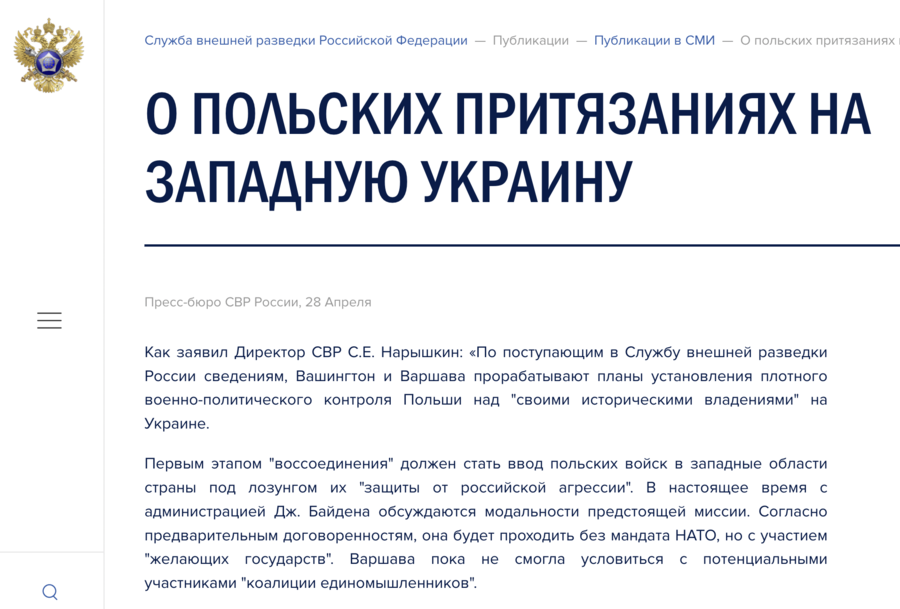 Naryshkin's statement was reported by many news agencies, including Russian state-owned RIA Novosti and the international agency Reuters. The claim immediately went viral in the Russian segment of the internet, but most posts were not original - they only repeated the language of the SVR press release (you can find such examples here, here and here.) There were some inconsistencies, too. Some posts claimed that NATO fully or partially supported the annexation of Western Ukraine, while others stated that Poland was an independent actor.

The final paragraph of Naryshkin's statement aimed to draw historical parallels with the first decades of the twentieth century. It reads: "It is an attempt to repeat the historical 'deal' made by Poland after World War I, when the collective West represented by the Entente recognized Warsaw's right first to occupy parts of Ukraine to protect the population from the 'Bolshevik threat' and then to include these territories in the Polish state. The events that followed became a vivid illustration of the colonial order and forced 'Polandization' as the main methods of building 'Great Poland.'"

The Triple Entente (known in Russian historiography as the Entente) was a pre-WWI political bloc that in addition to Great Britain and France included Russia. Its goal was to counterweight the Triple Alliance of Germany, Austria-Hungary and Italy, but the agreement among Great Britain, France and Russia did not include military cooperation or mutual defense, unlike the Triple Alliance. World War I was fought by two other, much broader coalitions that included more countries on each side, the Allied Powers against the Central Powers.

Thus, linking the "collective West" to alleged expansionism under the Entente agreement, with Imperial Russia being one of its central participants, is among the strangest aspects of the recent Russian intelligence claim.

Poland immediately denied the SVR allegations, describing it as disinformation. "The lie about Poland's alleged plans to attack Western Ukraine has been repeated for several years," said Stanislaw Zaryn, a spokesman for Poland's State Security Services.

On April 29, within a day of publishing its initial claim, the SVR released another statement. It contained only one paragraph, and its tone was considerably softer. Instead of the establishment of "tight military and political control of Poland over 'its historical possessions,'" the new press release spoke of a Polish "peacekeeping contingent" in Western Ukraine. The SVR claimed that it was not a theory but "intelligence information."

On May 3, 2022, Poland's Constitution Day when the country celebrated the 231st anniversary of the signing of its first national charter, U.S. Secretary of State Anthony Blinken issued a statement stressing the importance of bilateral partnership between the two states "in light of Russian aggression." However, he made no mention of Poland's alleged plans to attack Western Ukraine. On the contrary, Blinken thanked Poland for its "steadfast support for Ukraine" and "its warm welcome to millions of innocent civilians escaping the brutality of Russia's war of choice."

Lead Stories reached out to the U.S. State Department for additional comment. The agency's press office responded by email on May 5, 2022: "These allegations by Russia are preposterous. They are the kind of disinformation we have seen repeatedly from Russia in Ukraine and in other countries around the world. This is an obvious ploy by the Kremlin to falsely justify continued premeditated, unprovoked, and unjustified attacks against Ukraine. Russia has a clear pattern of disinformation, and no one should fall for it."