Will a suburban Chicago high school use a race-based grading system during the 2022-2023 school year? No, that's not true: According to Oak Park and River Forest High School, such a policy has neither been proposed nor implemented at the school. School officials clarified that the school is conducting research into equitable grading policies and that some teachers have tested such policies in their classrooms. However, none of those policies are related to grading students specifically based on their race, nor have any of the policies been adapted for schoolwide use at the time of writing.

The claim, which originated from an article published by West Cook News (archived here) on May 30, 2022, also appeared in several articles from other publications (here, here and here) including one from Breitbart (archived here) published on May 31, 2022. The Breitbart article, titled "Chicago High School to Implement Race-Based Grading System," opened:

A high school in a Chicago is implementing a race-based grading system 'to adjust classroom grading scales to account for skin color or ethnicity of its students.'

The move is necessary, advocates say, because 'traditional grading practices perpetuate inequities,' a slide used in a presentation said.

Students, depending on their race, will not be held accountable for missing class, misbehaving in school, or for failing to turn in assignments.

A Chicago high school will use a race-based grading system "to adjust" "grading scales to account for skin color or ethnicity" of students.

The claim was based on a portion of a regular meeting held by the school's board of education on May 26, 2022. However, the school, abbreviated as OPRFHS, refuted the claim in a statement (archived here) posted to its website on May 31, 2022:

As part of the Board of Education's strategic plan, the OPRFHS Grading and Assessment Committee was formed to examine national research on objective, unbiased practices for determining whether students have mastered academic content. At the Board of Education's May 26 meeting, the administration's representative to the OPRFHS Grading and Assessment Committee provided an initial report that included a progress update on the committee's examination of grading practices.

At no time were any statements made recommending that OPRF implement a race-based grading approach.

Prior to implementing grading changes, if any, recommendations will be made to the Board at a public meeting. Again, contrary to the title of the article, the district has not implemented, and has no intention of implementing, any grading and assessment policy based on race.

The agenda from the May 26, 2022, meeting supports the school's rejection of the claim. During the discussion section of the meeting, Laurie Fiorenza, the assistant superintendent for student learning at the school, was on the agenda to discuss the findings of the school's Transformative Education Leadership Team. The slideshow for the presentation of the discussion was titled "Strategic Plan Priority 2: Transformative Education Professional Development & Grading" (archived here). 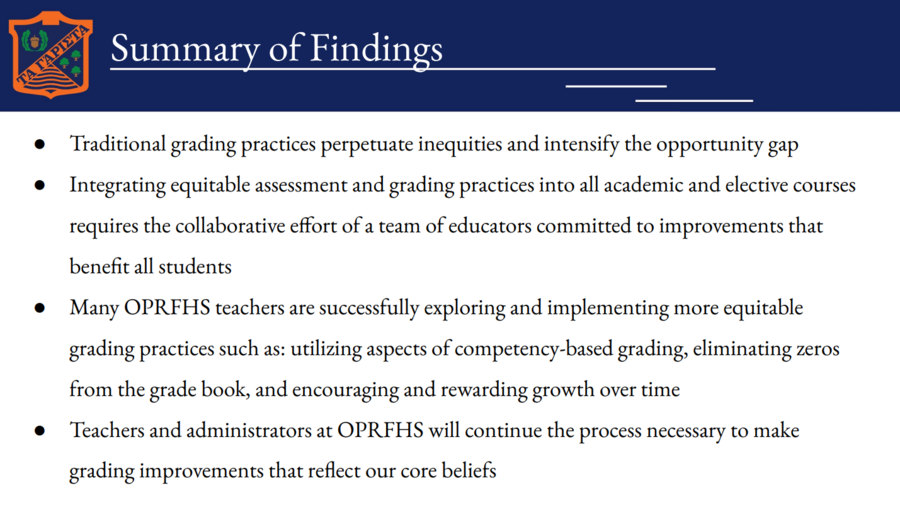 Many OPRFHS teachers are successfully exploring and implementing more equitable grading practices such as: utilizing aspects of competency-based grading, eliminating zeros from the grade book, and encouraging and rewarding growth over time

The 10th slide from the presentation, titled "Next Steps," did state that the school plans to "examine grading and reporting practices in academic and elective courses utilizing evidence-backed research and the racial equity analysis tool." Lead Stories searched for the "racial equity analysis tool" and found it (archived here) among documents on the school's website. The tool is a set of guiding questions that are meant to determine whether policies used by District 200, the district the school is under, are "likely to close the opportunity gap for marginalized populations." None of the questions appear designed to alter grading scales based on students' racial backgrounds. Similar versions of the tool are also used by school districts in other cities, including Boston Public Schools, Portland Public Schools and Seattle Public Schools.