Did a Yuma County, Arizona, woman plead guilty to a role in a sophisticated ballot trafficking ring that supposedly stole the 2020 presidential election from Donald Trump? No, that's not true: Guillermina Fuentes did plead guilty on June 2, 2022, to "one count of Ballot Abuse, a Class 6 Felony, for her role in an August 2020 Primary Election 'ballot harvesting' scheme where early ballots from other voters were collected and deposited into a ballot box on primary Election Day," the Arizona Attorney General's Office said. But there's no evidence Fuentes committed a crime involving the November 2020 general election or was involved in a larger "ballot trafficking ring." A second person, Alma Juarez, also pleaded guilty to one count of ballot abuse.

Gadsden Elementary School Board Member and former Mayor of San Luis Guillermina Fuentes has pleaded guilty to her role in a sophisticated ballot trafficking ring that stole the 2020 Presidential election from President Trump in Arizona. 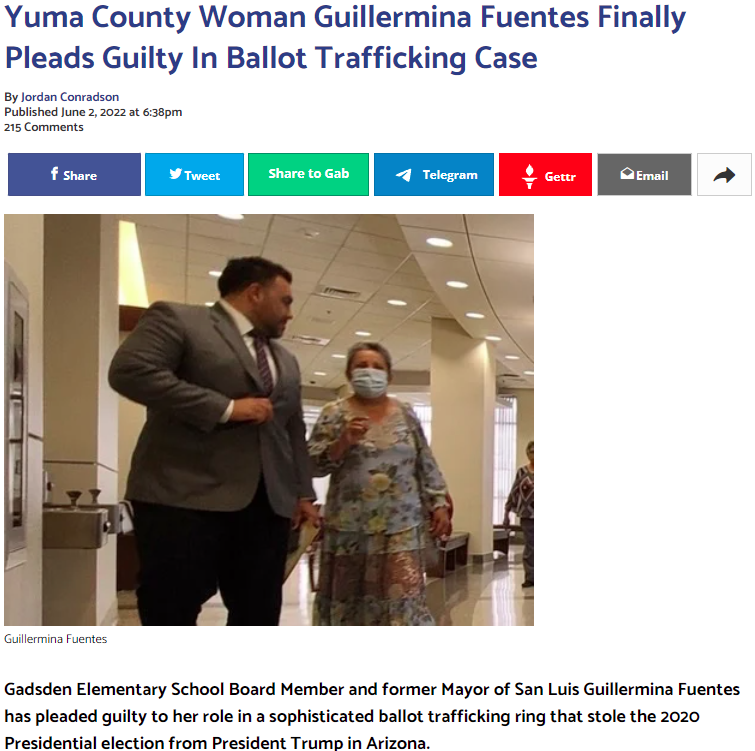 Claims of a stolen election have been Republican talking points since the 2020 vote, with particular focus on the hotly contested states of Arizona, Georgia, Michigan, Pennsylvania and Wisconsin. Biden defeated incumbent Donald Trump by more than 7 million in the popular vote and won the Electoral College 306 to 232.

While The Gateway Pundit story casts Fuentes as a player in a national "sophisticated ballot trafficking ring that stole the 2020 Presidential election from Donald Trump," there's little to suggest that's true. On June 2, 2022, the Albuquerque Journal reported:

Republicans who have rallied around the possibility of widespread voting fraud in the 2020 election where former President Donald Trump was defeated have pointed to the charges against Fuentes as part of a broader pattern in battleground states. But there's no sign her illegal ballot collection went beyond the small-town politics Fuentes was involved in.

Fuentes is a Gadsden Elementary School Board member and a former mayor of San Luis, a town of about 25,000 in southwest Arizona.

Her abuse plea involved the 2020 primary election in Arizona, not the hotly contested November 2020 presidential election that has also been the focus of the "2000 Mules" movie. The film champions the theory that 2,000 people in five key swing states collected and delivered hundreds of thousands of absentee ballots on behalf of a "cartel" to throw the 2020 presidential election in favor of Joe Biden. The alleged scheme involves nonprofit groups. Lead Stories previously debunked the film's claims here.

But, if Fuentes was involved in a "ballot trafficking scheme that stole" the election from the former president as The Gateway Pundit claims, her part of it wasn't very successful. Trump's margin of victory in Yuma County in 2020 was significantly larger than in 2016. The Arizona Republic reported:

Yuma County authorities have been looking into allegations of voter fraud for more than a year, Yuma County Sheriff's Office Public Information Officer Tania Pavlak told Lead Stories in a May 25, 2022, phone interview. A May 11, 2022, news release from the sheriff's office said:

The Yuma County Sheriff's Office (YCSO) and the Yuma County Recorder's Office (YCRO) are working together to actively examine cases of voting fraud from the 2020 General Election and now a recent pattern of fraudulent voter registration forms leading up to the 2022 Primary Election.

Some examples of voter fraud Yuma County is currently seeing are the following:

If you suspect or witness individuals committing any of the mentioned voting frauds, share their name or any other identifying information to law enforcement immediately.

The majority of voter fraud cases in Yuma County are related to duplicate voting (typically charged as illegal voting and false voter registration). Under Arizona law, illegal voting is a class 5 or class 6 felony. A person found guilty faces up to 2 or 2.5 years in prison, fines, restitution, loss of voting rights, and/or probation.

Lead Stories has debunked dozens of claims of widespread voter fraud following the 2020 presidential election, many of them including reporting by The Gateway Pundit.