Did NASA hand over control of the International Space Station (ISS) to Russia after a Russian official threatened to crash it into Earth? No, that's not true: A NASA spokesperson told Lead Stories that a long-established ceremonial change of command "does not represent overall control of ISS. That remains unchanged with the crew." There was no threat to "crash it into Earth."

The claim appeared in an article (archived here) published by Projoktibangla.com on June 24, 2022, under the title "NASA Hands Over Control Of ISS To Russia After They Threatened To Crash It Into Earth?" It opened:

Russia is now in control of the International space Station (ISS) just weeks after its space chief threatened to crash the floating lab into the Earth.

This is what the article looked like on Projoktibangle on June 24, 2022: 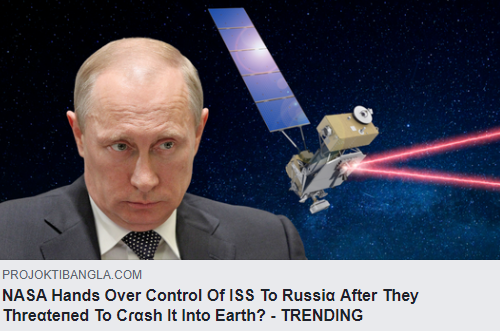 The article cites details from the May 4, 2022, change of command ceremony on the International Space Station. This is a tradition between the two countries and is not NASA ceding control of the ISS to Russia after threats by the head of the Russian space program. Command will return to NASA at the end of summer 2022.

NASA spokesperson Dan Huot told Lead Stories via phone on June 27, 2022, that the key exchange was not turning over "control" of the ISS:

The Space Station commander is responsible for the safety of the crew on board. His primary role is to lead orientation for the new crew that is arriving and to lead emergency training and simulations, of which we do frequently. This does not represent overall control of ISS. That remains unchanged with the crew.

The details and images of the ceremonial key exchange published on the Projoktibangla.com website were also published in multiple other news outlets, including a Sitech Daily article published on May 4, 2022, titled, "NASA Astronaut Hands Over Command to Russian Cosmonaut As SpaceX Crew-3 Prepares To Depart Space Station":

NASA astronaut Tom Marshburn handed over command of the International Space Station (ISS) to Russian cosmonaut Oleg Artemyev in a traditional Change of Command ceremony which began at 2:35 p.m. EDT (11:35 a.m. PDT) today. Artemyev, a veteran of three spaceflights to the space station, will lead the Expedition 67 crew until the end of summer.

The photos in both stories are the same and do not show NASA astronauts surrendering control of the ISS in response to threats.

Here is the image from Projoktibangla.com with the caption, "NASA HANDS OVER CONTROL OF ISS TO RUSSIA AFTER THEY THREATENED TO CRASH IT INTO EARTH (IMAGE:GETTY/NASA)": 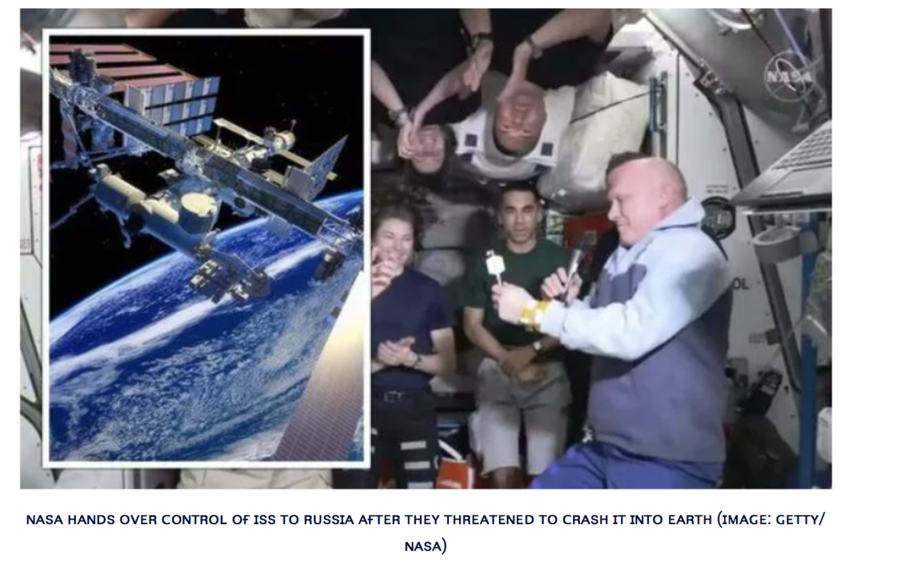 Here is the same image from Space.com with the caption, "Russian cosmonaut Oleg Artemyev (right) accepts the ceremonial key to the International Space Station from NASA astronaut Thomas Marshburn (left) on May 4, 2022. (Image credit: NASA TV)": 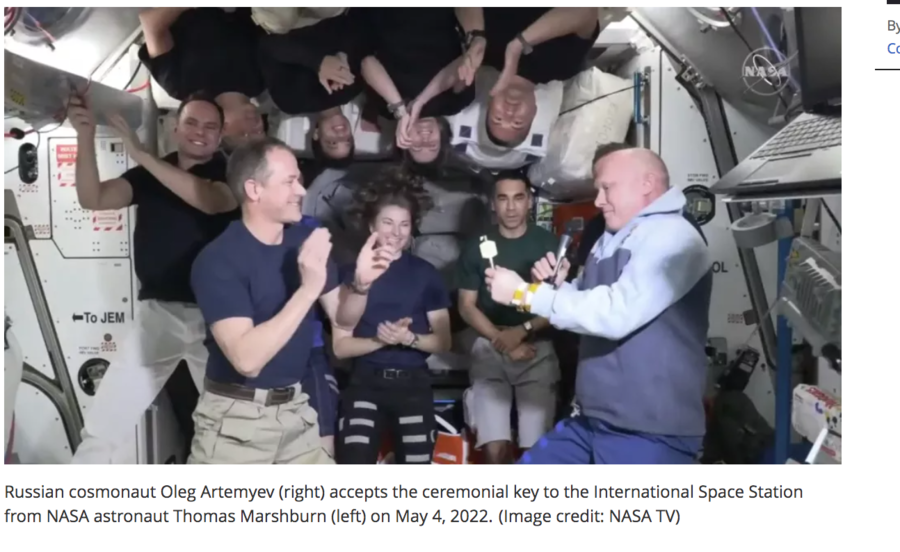 The reference to "threatened" that the Projoktibangla.com headline and article make apparently stem from remarks by Dmitry Rogozin, the director general of Roscosmos, in February 2022. He sent a series of tweets that seemed to ominously warn the United States that, due to sanctions imposed by President Joe Biden on the country as Russia began its war on Ukraine, the ISS could become a security risk. His tweets (using Google translate) said in English:

This is how you already do it by limiting exchanges between our cosmonaut and astronaut training centers. Or do you want to manage the ISS yourself? Maybe President Biden is off topic, so explain to him that the correction of the station's orbit, its avoidance of dangerous rendezvous with space ..garbage, with which your talented businessmen have polluted the near-Earth orbit, is produced exclusively by the engines of the Russian Progress MS cargo ships. If you block cooperation with us, who will save the ISS from an uncontrolled deorbit and fall into the United States or...
Europe? There is also the option of dropping a 500-ton structure to India and China. Do you want to threaten them with such a prospect? The ISS does not fly over Russia, so all the risks are yours. Are you ready for them?
Gentlemen, when planning sanctions, check those who generate them for illness

The likelihood of the ISS actually crashing into the United States if Russia were to stop supporting the space program appears to be very small. After Rogozin made the comments, NASA Administrator Bill Nelson told the Associated Press that the two countries were still cooperating on the ISS on March 18, 2022:

That's just Dmitry Rogozin. He spouts off every now and then. But at the end of the day, he's worked with us. The other people that work in the Russian civilian space program, they're professional. They don't miss a beat with us, American astronauts and American mission control.

The space station was not designed to be disassembled, and current interdependencies between each segment of the station prevent the U.S. Orbital Segment and Russian Segment from operating independently. Attempts to detach the U.S. Orbital Segment and the Russian Segment would encounter major logistical and safety challenges given the multitude of external and internal connections, the need to control spacecraft attitude and altitude, and software interdependency.

Wayne Hale, former program manager of NASA's space shuttle and a member of NASA's Advisory Council, said, "If the Russians walk away, then you've got this massive object that's going to come back in randomly somewhere over the Earth," in an article published by The Verge on February 25, 2022. He added, "It's not like a week, it'll probably be several years." NASA would have time to develop a safe response if that action were taken, he said.