Did the police chief for Uvalde, Texas, Consolidated Independent School District, make political contributions to President Joe Biden and Beto O'Rourke, candidate for governor of Texas in 2022 and a former U.S. representative for the state? Not that Lead Stories could find: Although individuals with the name "Pedro Arredondo" and the name "Peter Arredondo" donated to Democratic causes, none of those individuals appear to be the Uvalde school district police chief, Pedro "Pete" Arredondo, who was involved in handling the active-shooter situation at Robb Elementary School in Uvalde. There is a Texas school official named Peter Arredondo, but the two individuals clearly are not the same person.

Purely coincidence that the Police Chief who PURPOSEFULLY held off on stopping a school shooting, allowing the slaughter of innocent children, donated to anti-gun politicians Biden and Beto. 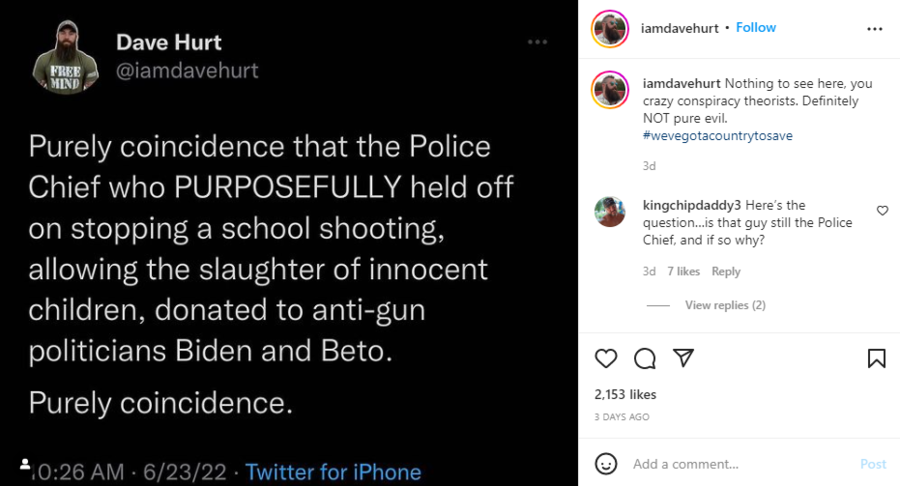 The post does not name the police chief nor does it cite any records or any sources for its claim.

This claim seemingly relies on erroneous information. It may have been related to a tweet (archived here) published on May 28, 2022, that inaccurately claimed that Arredondo, the police chief, donated to O'Rourke. However, as shown in the Federal Election Commission individual contribution database search link included in the tweet, the search was for "Peter Arredondo," and "Peter" isn't the police chief's first name.

The search generated two results for a "Peter Arredondo" who worked (found by clicking on the arrows on the far right of each listing) as a coordinator for UISD, which Lead Stories discovered is an acronym for United Independent School District in Laredo, Texas. Arredondo the police chief previously worked in the district, but in its police department. "Peter Arredondo" made two contributions to ActBlue, a fundraising platform for Democratic candidates: One contribution was specifically earmarked for "Beto for Texas" and received by the FEC on December 23, 2017. However, as indicated in the FEC database, Peter Arredondo is a coordinator at the school district and isn't the same person as Arredondo the police chief.

When Lead Stories searched for "Pedro Arredondo" under the contributor details section of the FEC database, we used a couple of other filters. We stipulated that "Pedro Arredondo" needed to have donated from Texas and we limited the contribution dates to January 1, 1973, to December 31, 2022, a timeframe that covers Biden's entire national political career.

The search generated 13 results, all listing a contributor named "Pedro Arredondo." The contributor, who didn't have an employer listed in the database, made all their donations between April 2020 and March 2022 to ActBlue. While some were earmarked for "Val Demings for US Senate," "DSCC" (an acronym for the Democratic Senatorial Campaign Committee) or "DCCC" (an acronym for the Democratic Congressional Campaign Committee), none were specifically earmarked for Biden or O'Rourke. (Again, these details were found by clicking on the arrows on the far right of each listing.) The contributor was listed as making all the contributions from Dallas, which is more than five hours away from Uvalde. A screenshot of our search is below: 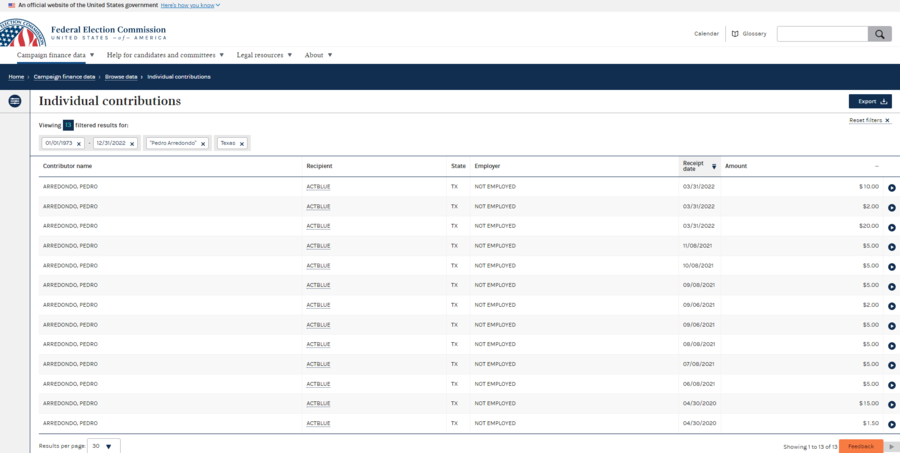 Lead Stories then searched for a "Pedro Arredondo" living in Dallas in the same ZIP code as the contributor listed in the FEC database. We found contact information for such a person and reached out for their comment on the claim. We will update this story with any response.

Lead Stories also reached out to the Uvalde Consolidated Independent School District about the claim and will update this story if we receive a relevant response in return.

Other Lead Stories fact checks related to the shooting in Uvalde can be found here.