Does squeezing the gas pump at "top speed" put more air in your tank, ultimately overcharging you for less than a full tank worth of fuel? No, that's not true: A representative of the American Automobile Association (AAA) emailed Lead Stories to say that the speed at which a person pumps gas does not impact the cost or amount of fuel being delivered to the tank as "fuel is metered at the pump without any aeration." A representative of the New York state Department of Agriculture and Markets told Lead Stories, "New York State Agriculture and Markets law requires petroleum meters to be tested annually, and testing procedures require measuring the volume of gas pumped whether the pump handle is squeezed all the way (a "full flow" test) or partially (a "special" test)."

I learned this trick from a friend. That will be very helpful with gas saving.

Did you know that squeezing the gas pump at top speed will put more air in your tank? Yes the gas vapors when being rushed in pressure. That's why your tank got full with less gas.

So recommend you squeeze at low speed level so that way vaporing won't happen and you get your tank completely full of tank without adding air and you will get full of gas worth paid for. 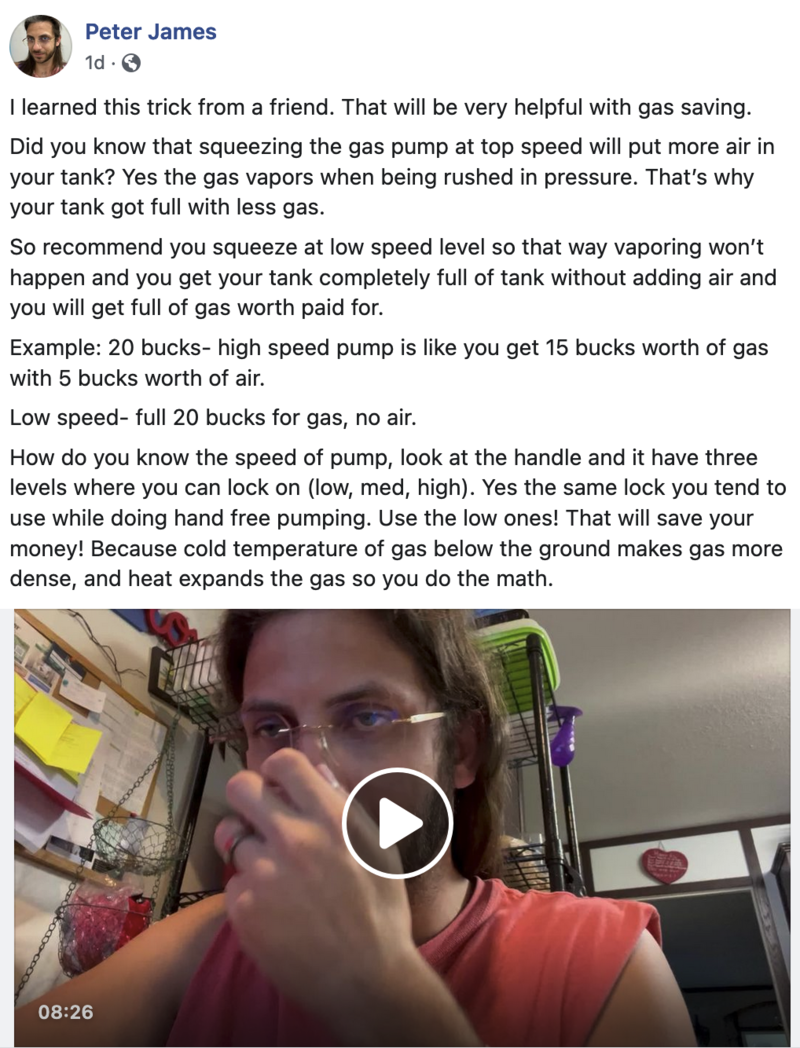 Lead Stories reached out to AAA about the post. Andrew Gross, a public relations manager, emailed us on June 15, 2022, explaining why this claim is inaccurate:

Whether you pump gas fast or slow does not impact the measurement/amount of fuel being delivered and/or the cost. If you pump 10 gallons fast or slow, you should get 10 gallons of gas and be charged for the amount. Fuel is metered at the pump without any aeration.

The fast fill may 'click off' the handle, thus making one believe the tank is full when it really is not. Pause for a few seconds and try adding fuel again, if the handle 'clicks off' the tank is full...Note: One should not overfill their tank (e.g. keep adding gas until it spills out of the filler neck - this could damage the Evaporative Emission Control System, commonly referred to as the EVAP system.)

Gross also clarified the validity of various other claims associated with pumping gas:

In most states, governmental agencies regulate and inspect gas pumps for calibration accuracy.

Lead Stories reached out to the New York Division of Weights and Measures about this post. Hanna Birkhead, the associate director of public information at the Department of Agriculture and Markets, emailed us on June 21, 2022, also explaining why this claim is inaccurate as it pertains to a larger city like New York State:

The Department of Agriculture and Markets is dedicated to promoting a fair and equitable marketplace in New York State by assuring measurement accuracy. New York State Agriculture and Markets law requires petroleum meters to be tested annually, and testing procedures require measuring the volume of gas pumped whether the pump handle is squeezed all the way (a "full flow" test) or partially (a "special" test). Both tests require the volume measured to be within tolerance. A failure would lead to stop use/repair orders. This inspection and testing procedure ensures that the number of gallons paid for by a consumer is actually received in the tank.

The effect of small inaccuracies in transactions can be profound. For example, if every gas pump in the country were inaccurate by as little as a tablespoon per 5 gallons of gas, it would amount to a cumulative error of $125 million annually.

Lead Stories reached out to other state agencies and also to companies that manufacture gas pumps, and will update this story as appropriate if responses are received.