Does this photo show a U.S. military polymer drone that looks like a live fly? No, that's not true: This is not a drone but an example of a bot fly, the collections manager of the University of Arizona's Insect Collection told Lead Stories in an email. It belongs to the genus Cuterebra, the senior museum scientist at The Entomology Research Museum at University of California, Riverside said in an email. Insect drones do exist and they are used by the U.S. military, but they do not look like realistic insects at the time of writing. 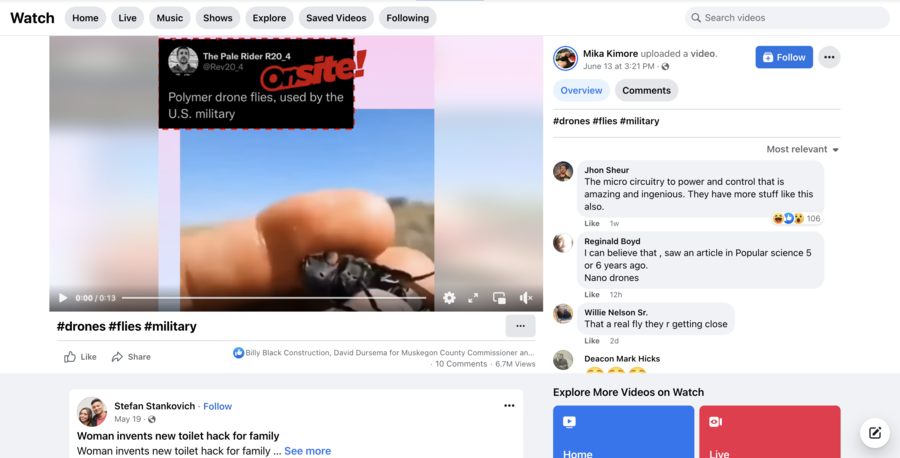 There is no evidence of this fly being a drone. No technological parts are shown to prove it's not a real insect. A reverse image search of the video in Google images did not result in any links that could help us verify what is shown in the video. TinEye results were the same; nothing.

After reviewing the video, it looks to me like an actual bot fly, not a military 'drone'.

Hall also gave us some links of Cuterebra ruficus (a species of bot fly) photos to compare to the insect in the Facebook video: here and here.

We also emailed Douglas Yanega, the senior museum scientist at The Entomology Research Museum at the University of California, Riverside with the same query. He wrote on June 27, 2022:

This is indeed a rodent bot, the genus is Cuterebra ... They are pretty odd in that they have no mouth; all their feeding is done by the larvae, which live under the skin of rodents.

Yanega provided this link to more information about the genus Cuterebra.

There are such things as "insect drones" but they rarely look as bug-like as this bot fly. Here is an example of a "Black Hornet" drone now used by the U.S. military. Alex Caccia, a chief executive of Animal Dynamics, a technology start-up applying lessons from wildlife to drone design, told BBC, "Making devices with flapping wings is very, very hard ... A dragonfly is an awesome flyer ... nothing is left to chance in that design. It has very sophisticated flight control."

As of June 18, 2021, the U.S. Air Force was developing micro-drones that look like realistic insects. We have reached out to the Air Force about this claim and will update this story when we receive a response.