Did "big tech media" stage a scene featuring workers wearing protective gear who were crying outside a hospital in order to frighten people? No, that's not true: This video shows a behind-the-scenes view of a dramatic production in China about the COVID-19 pandemic. According to Jin Jin, an actress based in Shanghai who played the crying woman, the scene was based on a real event during the pandemic.

Several behind-the-scenes clips of the production were shared on video platforms by Jin Jin in April 2020. The film has not yet been released. There is no indication that the staged scenes played by actors were intended to misrepresent that they were instead live, filmed on location, news footage.

The claims that this scene showed crisis actors began to circulate on social media in June and July of 2022 in several languages. Examples are here in Turkish, Chinese, Greek, German and Arabic. An example in English was posted on Facebook on July 10, 2022, with this caption:

This is how the BIG TECH media is scaring the people. Don't trust the Media they are the real Enemy!! 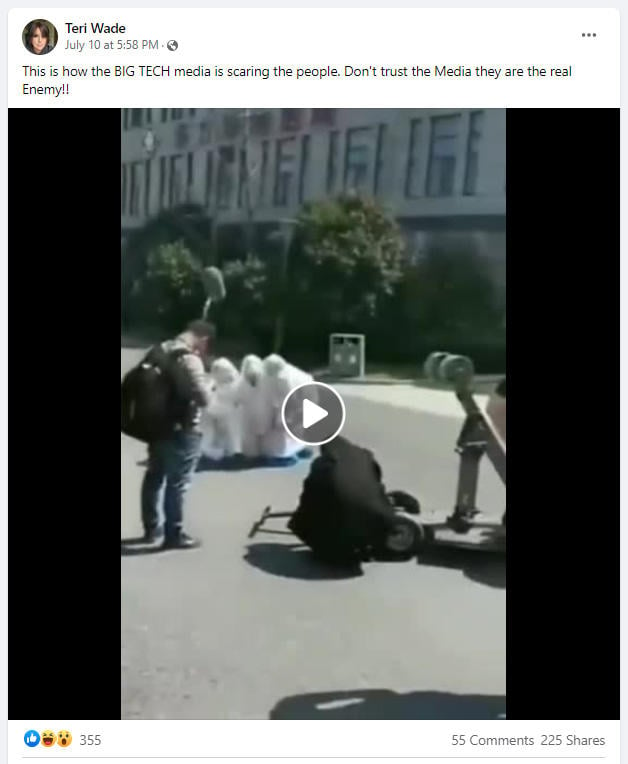 Using a screenshot from this video on Google and Baidu reverse image search tools, Lead Stories identified videos (here and here) that included additional scenes from this production, including an office, a hospital room and an exterior scene with a nurse.

Lead Stories then reached out to Deborah Chan, a lecturer of audiovisual translation at University College London for help reading the signage on the building in the video. Chan identified Eastern Greenland Hospital, which is in Jiangsu province. The hospital name quickly led to an article from the Hong Kong University-based fact checking project annielab.org. The June 21, 2022, article is titled, "False: This video in China shows anti-pandemic drama, not a staged 'fake' tragedy."

The annielab.org report shared links to and screenshots of the behind-the-scenes clips Jin Jin had posted on the video platforms Douyin and Kuaishou. Lead Stories was unable to open the links on Douyin.com; the current notice says that "the video you want to watch does not exist." Annielab.org also conducted a live chat interview with Jin Jin. 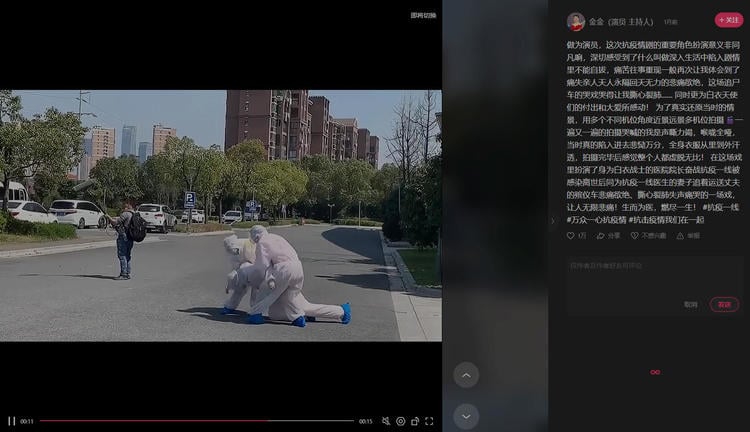 Included in the annielab.org article was a screenshot of video thumbnails posted by Jin Jin to her Douyin account (below) that show the additional scenes with the film crew that Lead Stories found earlier in other social media posts.