Did Dutch farmers protesting against government measures aimed at curbing emissions buy a tank to block supermarket distribution centers? No, that's not true: tweets making that claim actually show video of a restored World War II vintage Sherman Firefly tank being returned to the owner's warehouse after an exhibition.

The claim appeared in a tweet published by Keean Bexte on July 6, 2022 (archived here) which reads:

So, uh.... Dutch farmers have purchased a tank to use to block distribution centres.

The video in Bexte's tweet was used in an earlier Dutch language tweet by "henkjan" (archived here):

Translated it reads: "Farmers in the Achterhoek have bought a tank to block dc".

However a tank with the exact same numbers painted on the hull and parked in front of the same building seen in the video is identified as a 1943 vintage Sherman tank in this list of surviving Sherman Fireflies (archived here): 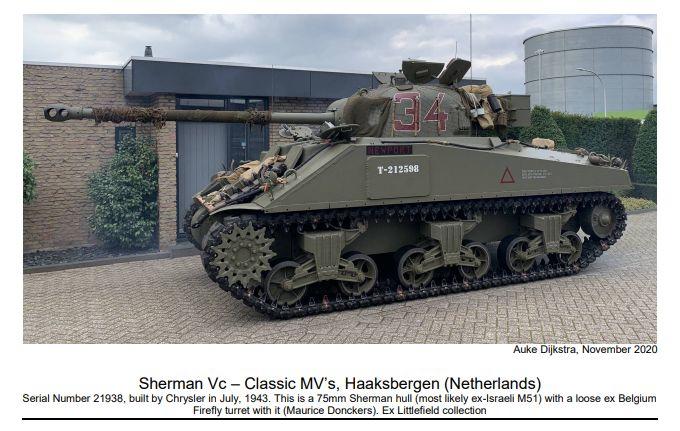 (Source: screenshot of http://the.shadock.free.fr/Surviving_Sherman_Fireflies.pdf created by Lead Stories on July 6, 2022)

The photographer is identified as "Auke Dijkstra" and the owner as "Classic MV's". And indeed on the Facebook page of "Classic MV's" we find pictures of the exact same tank:

There is even video of the tank being driven on the parking lot of a company, with the caption "Preparations for A & E 2022 and Tankfest 2022":

A post on the Tank Museum's Facebook page also announced that the tank would be guest starring at the event:

Although a later post on the Classic MV's page makes it clear the tank didn't make it to the event due to customs issues, crucially, it shows the tank on the exact same truck shown in the original video:

Note that the "Ommen 75 Jaar Vrijheid" event that is mentioned in the post is a commemoration of the liberation of The Netherlands at the end of the Second World War and that, according to its Facebook page, it involves re-enactments with veterans and military vehicles. It is unrelated to farmers or protests.

The industrial building in the background of many of the pictures and videos appears to be located here according to Google Maps:

(Source: Google Streetview screenshot made by Lead Stories on July 6, 2022)

The building appears to be part of a company named "Dijkstra Plastics" which is also referenced in several posts on the Classic MV's Facebook page. That matches the last name of the photographer ("Auke Dijkstra").

We called Dijkstra Plastics on July 6, 2022 and they confirmed over the phone Auke Dijkstra was indeed the owner of the tank and that it definitely hadn't been sold to anyone.

On July 7, 2022 Classic MV's confirmed on their Facebook page the story was false, writing:

This week we were very much involved in a "fake news" issue linking us to the farmers protests against the government's pollution plans..
We participated in an event called "Ommen 75 Jaar Vrijheid" from 1 till 3 July.
We wanted to unload the trailer with the Firefly on Monday the 4th but couldn't because the farmers were blocking a retail distribution centre which is very nearby to our building.
Tuesday it was a bit more calmer so we decided to unload but the unloading was filmed by some people that were hanging around the protests . From then on all kind of stories popped up about "farmers unloading a tank to participate in the protests" etc, etc.
Although we are very committed to sustainability initiatives, and we are backing up the farmers in this unfair fight against unfounded government decisions, we are in no way involved in these farmer protests.