Did a judge seal the court case of Jeffrey Epstein associate Ghislaine Maxwell? No, that's not true: The majority of the documents from the case are available to the public and were shown during her trial. Only one piece of evidence remains sealed from the trial. U.S. District Judge Alison J. Nathan ruled in November 2021 that only the portions of Maxwell's address book that had a name with the word "massage" next to them could be submitted into evidence and that the rest of the book would be sealed. The Twitter account shown in the Facebook post making the claim is supposed to be from singer Kid Rock, but the account does not match his official verified Twitter account and it appears to be a fake message.

There is only one possible explanation for a judge to seal Ghislaine Maxwell's court case. They are protecting pedophiles in both Hollywood and Washington D.C. 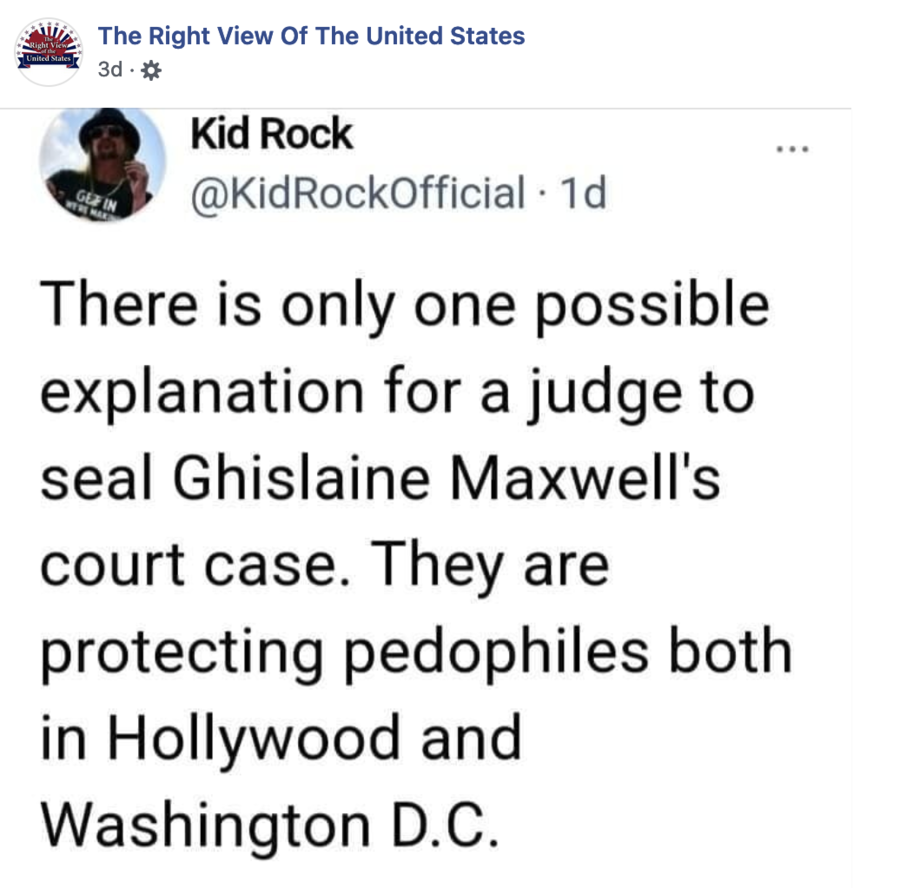 The entire 2021 trial in New York City was open to the public and to the press, as was Maxwell's sentencing in 2022. At the onset of the trial, the judge ruled on an address book being introduced as evidence, as the Associated Press reported on November 15, 2021:

Reports that investigators seized Maxwell's address books have sparked speculation that the trial could explore Epstein's connections to Prince Andrew, former President Bill Clinton and former O.J. Simpson lawyer Alan Dershowitz. But the judge has made clear there will be no name-dropping at trial, saying only certain pages of an address book -- showing a section naming the alleged victims under the heading 'massage' -- will come into evidence.

In December 31, 2021, the Associated Press debunked the claim that the court case was sealed:

Almost every exhibit in the Maxwell trial was released publicly, including pictures of Epstein and Maxwell together. However, the judge did find at the outset of the trial that only certain pages from Maxwell's address book identifying victims with the word 'massage' next to them could be marked into evidence.

Reporter Matthew Russell Lee with Inner City Press, who covered the trial, tweeting from the courtroom, noted "Exhibit 52" was introduced into evidence on December 2, 2021, and the assistant United States attorney saying it was "sealed":

AUSA: Is this the same you saw when you were that or a later version?
Alessi: A later version.
AUSA: Pull up Exhibit 52a. It is a sealed exhibit.
Judge Nathan: Let's take a break.
[No snacks mentioned. But tasty podcast coming soon & https://t.co/bwlifjiBt2

Maxwell's federal trial was not televised per court rules but was covered by multiple national news outlets and by media outlets from the courtroom daily, as Lead Stories reported here. All the Maxwell debunks on Lead Stories can be found here.

Lead Stories reached out to Maxwell's attorneys and the U.S. Attorney's Office for the Southern District of New York for comment and will update the story when a response is received.