Is it true that Ukraine's Sapphire rescue ship "broke into" Crimea in July 2022? No, that's not true: Russian forces captured the vessel near Snake Island in the Black Sea and brought it to the annexed peninsula months earlier. In April 2022, the rescue ship was returned to Ukraine, a developmeht that was confirmed by both Moscow and Kyiv.

The claim appeared in a July 9, 2022, Facebook post that contained supposed video of the alleged incident. The caption says:

13 minutes ago - The Ukrainian Ship 'Sapphire' Broke into the Crimea - Rocket attacks will follow.

The first lines of the clip repeated the caption. It continued:

The Ukrainian ship Sapphire was spotted in the port of Sebastopol.

At the 00:50 mark, the narration of the video says in English:

How exactly the ship ended up in the Crimea is unknown since there are no official statements on this subject either from Ukraine or Russia. 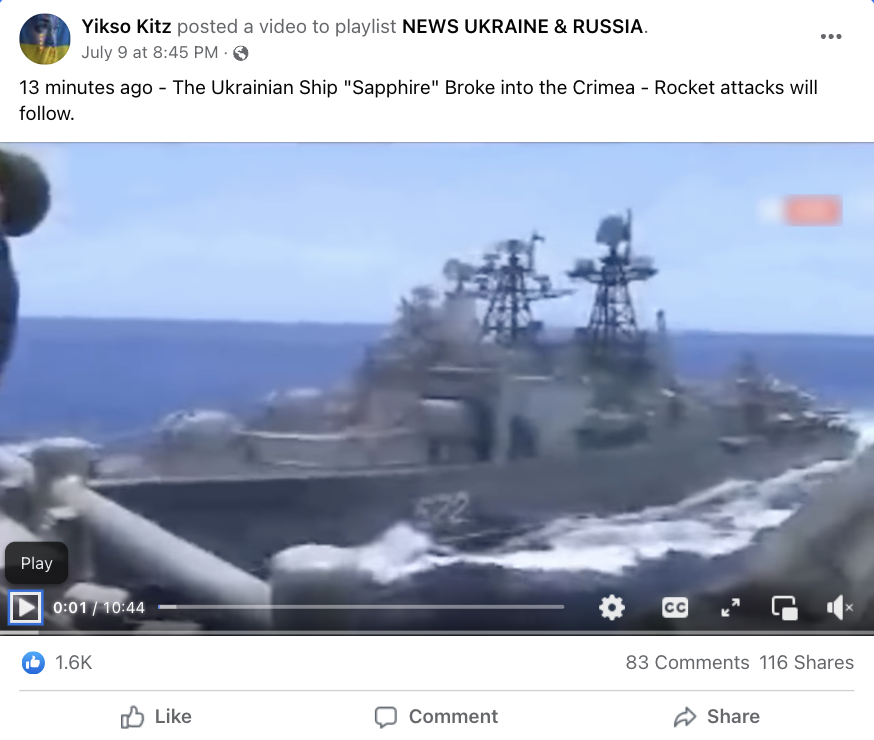 The language of the claim contains some clues. Quotation marks around the ship's name are consistent with Russian punctuation. More importantly, the Facebook video repeatedly refers to the peninsula as "the Crimea." It was not uncommon until recently that native English speakers would say that, even though the official name of the place does not include the article. Ukrainians, supported by some culturally aware former U.S. officials, categorically objected to the use of "the" in the country's and peninsula's name, emphasizing that such language portrays the entire country and its annexed territory as a part of Russia. The very first link about the use of "the" in the peninsula's name on the Russian search engine Yandex brings people to the forum of allegedly native English speakers, where native Russian speakers ultimately recommend that others should say "the Crimea": 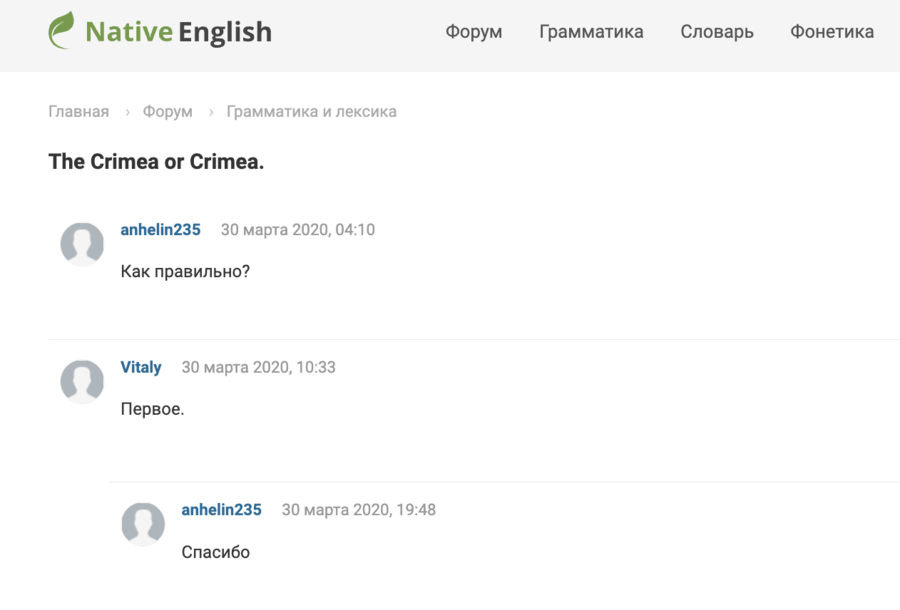 Lead Stories analysis reveals that the Facebook video contains irrelevant -- and misleading -- old footage. At the 00:00 mark, the clip shows a gray ship with the identifiable hull number 572. However, this footage has nothing to do with the 2022 Russia-Ukraine conflict. It was shot in 2019 by the U.S. Navy and distributed by American news outlets to illustrate a story about Russian and American military ships coming dangerously close in the Philippine Sea. For example, the Wall Street Journal published an article titled "U.S. and Russia Accuse Each Other After Harrowing Encounter at Sea": 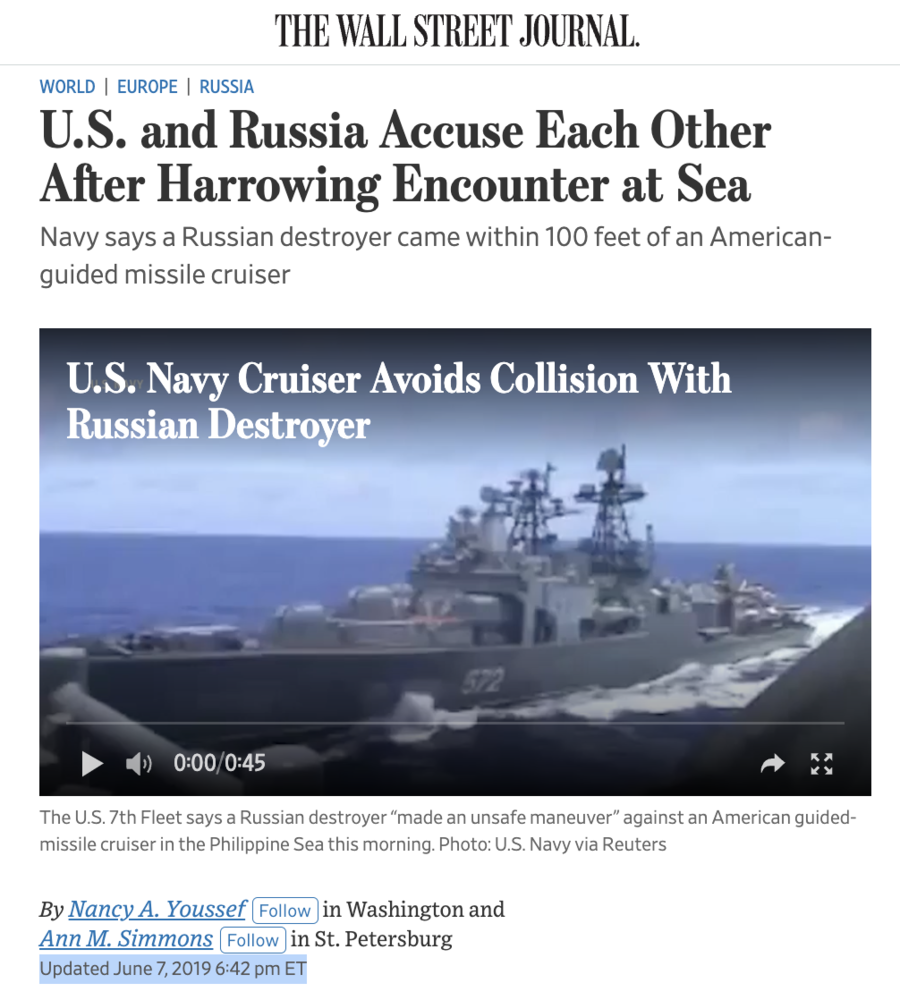 Unlike the military ships involved in the 2019 incident, Ukraine's Sapphire is a civilian resсue vessel that is not designed for combat operations. Its color is orange, not gray:

On July 9, 2022, when the video first appeared on Facebook, no American, Russian or Ukrainian reputable media outlet published any stories about the Sapphire rescue ship. Lead Stories ran searches for such reports in English, Russian and Ukrainian, with no results matching the video.

The ship's disappearance occurred much earlier this year. In contrast to the claims made in the Facebook post, both sides of the armed conflict did comment on the situation.

The news about the Sapphire's capture first broke on February 26, 2022, when the Ukrainian ministry of infrastructure informed the public about it via its Telegram account: 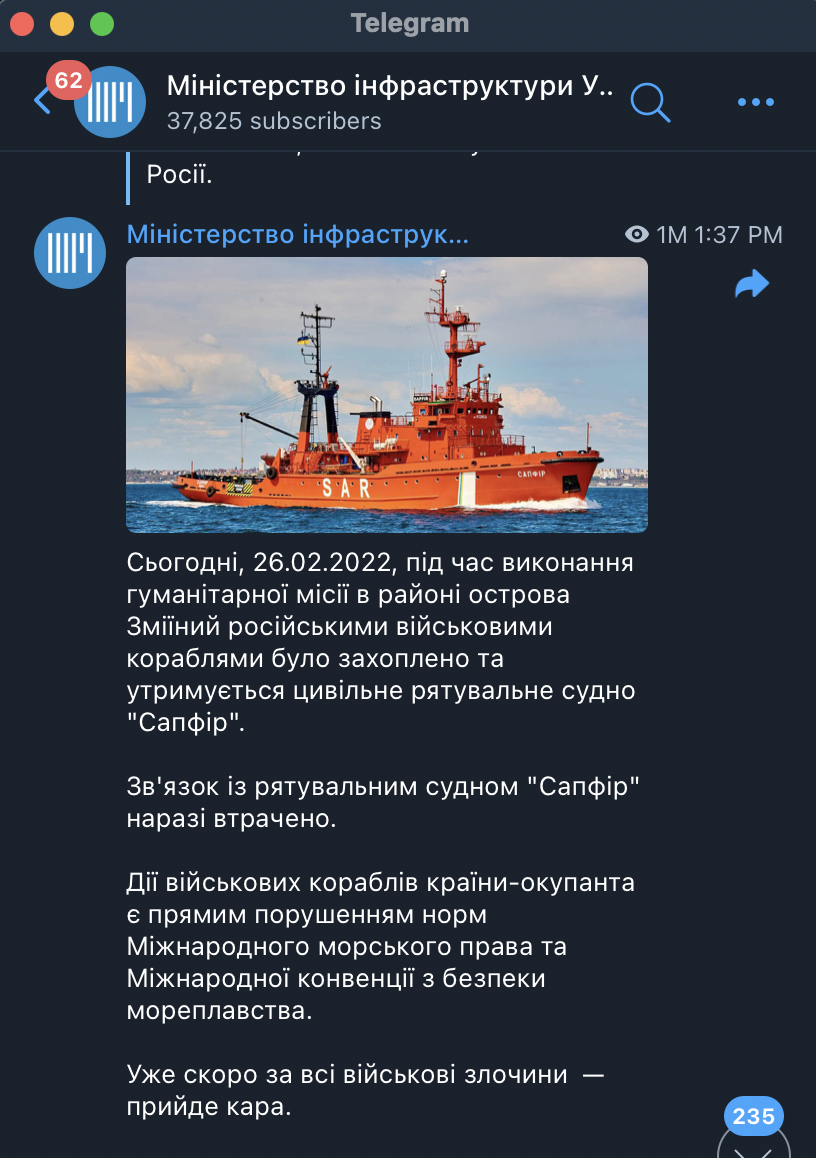 On March 9, 2022, the Ukrainian ministry of defense confirmed the news, adding that Russian soldiers were taking the ship to the port of Sevastopol in Crimea, holding the crew "at gunpoint": 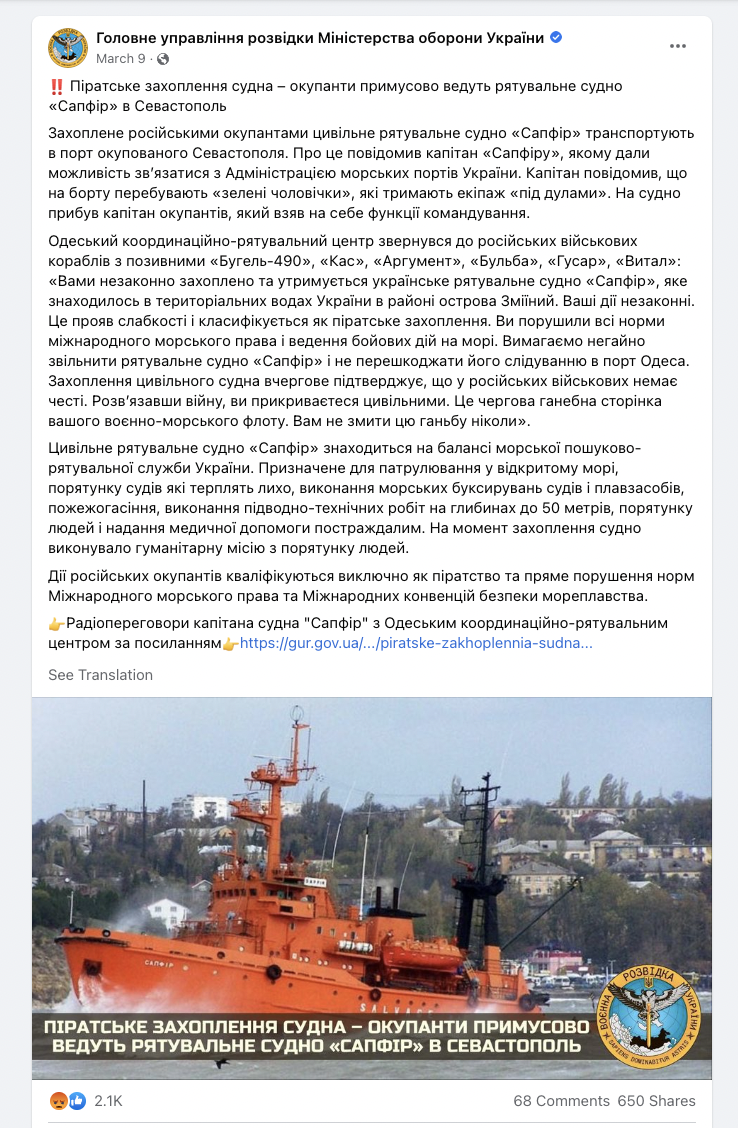 According to Ukrainian government agencies, the Sapphire was floating nearby Ukraine's Snake Island in the Black Sea when captured. At the time, it was a heavily contested area, but this particular ship didn't carry any military equipment, the Ukrainian ministry of defense said:

The vessel is intended for patrolling in the open sea, rescuing vessels in distress, performing sea towing of vessels and watercraft, firefighting, performing underwater technical work at depths up to 50 meters, rescuing people and providing medical aid to victims. At the time of the hijacking, the vessel was carrying out a humanitarian rescue mission.

The incident was covered by Ukrainian media (for example, here and here).

On April 8, 2022, Andriy Yermak, the head of Ukraine's President's Office, announced on Telegram that Russia had returned the Sapphire rescue ship to Ukraine, and that its crew members were freed as a result of a prisoner exchange: 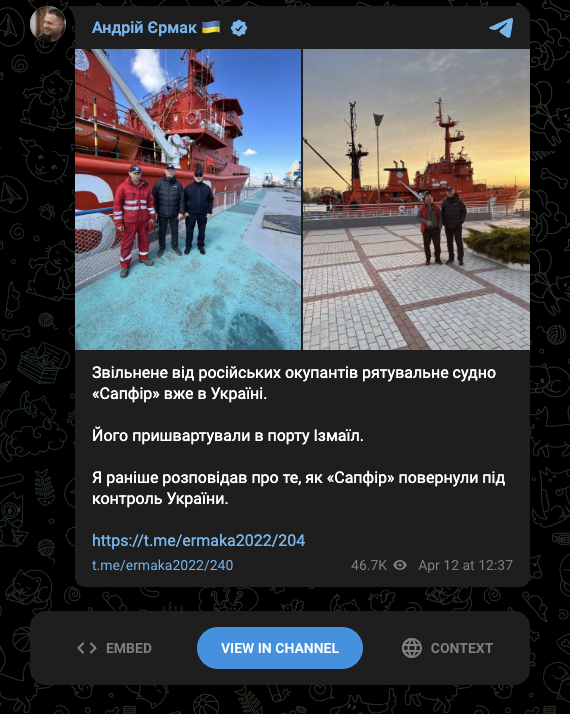 This time, Moscow did not contest the statements of Ukrainian officials. On the same day, the Russian ministry of defense, cited by the state-run media enterprise RIA Novosti, confirmed that the rescue ship was handed over to Ukraine.

On July 13, 2022, as the false claim continued to spread, Ukrinform, a state-owned Ukrainian news agency, published a story recap in English.