Does this video prove the United States is sending fighter jets to help Ukraine fight Russia? No, that's not true: U.S. Air Force Capt. M. Ryan Goss said the video doesn't show U.S. fighter jets, and the video was published on an Egyptian news website in 2016.

The claim appeared in a Facebook video on June 30, 2022, under the title "US sends fighter jets to help Ukraine fight Russia." 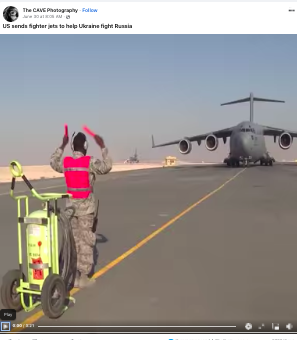 In a July 5, 2022, email to Lead Stories, Goss, with the U.S. Air Forces in Europe - Air Forces Africa Headquarters at Ramstein Air Base in Germany, wrote:

... that video looks like a standard unloading of a cargo plane, not related to the Ukraine conflict. Also, in the first part of the video the uniforms being worn are outdated. The U.S. Air Force stopped wearing the ABUs [Airman Battle Uniform] roughly 2 years ago. Additionally, there are no fighter jets in the video ...

Goss confirmed to Lead Stories that it looks like a C-17 cargo plane with an AH-64 Apache helicopter being unloaded in the video.

The video also appeared on Masrawy.com, an Egyptian news website, on January 16, 2016. Translated by Google Translate into English, the headline of the video reads: