Is Congress considering a bill that would cut $300 billion from Medicare to fund Obamacare, former President Barack Obama's health care law? No, that's not true: The Inflation Reduction Act, which was introduced by congressional Democrats, was passed in the Senate through the reconciliation process on August 7, 2022. If it became law, the measure would reduce some drug costs for Medicare beneficiaries and the $300 billion figure is roughly how much the bill's authors expect the government would save over the course of 10 years. Reducing Medicare's expenses does not equate to reducing benefits to Medicare beneficiaries.

We must ACT NOW to save Medicare. The Budget Reconciliation Bill will CUT Medicare to pay for Obamacare. 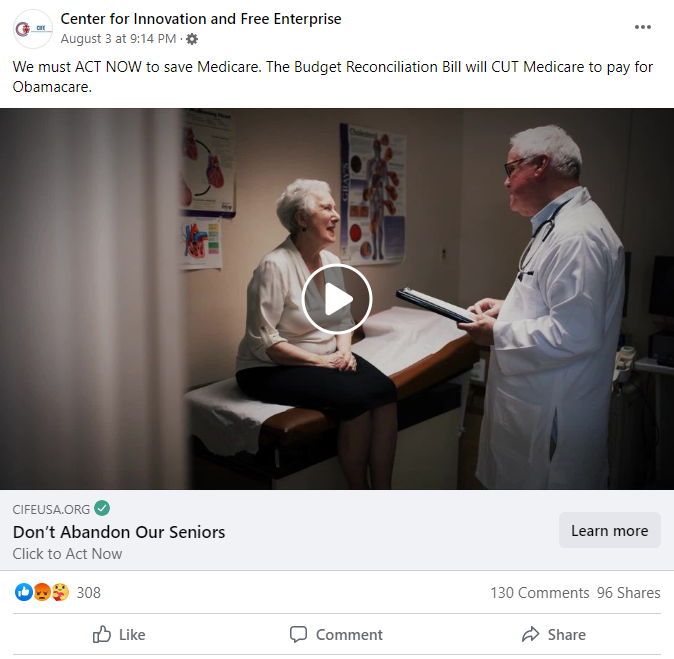 Unfortunately, Congress is negotiating a bill that would strip nearly $300 billion from Medicare to pay for Obamacare.

The link in the post led users to a webpage for the Center for Innovation and Free Enterprise, which describes itself as "A public policy project dedicated to principles of rule of law, free markets, individual liberty, and limited government."

Lead Stories spoke with Bill Hoagland, a former insurance executive who served 20 years on the staff of the Senate Budget Committee. Hoagland, now senior senior vice president of the Bipartisan Policy Center, said he believes the claim by the business-oriented group is "misleading." During an August 8, 2022, phone call, Hoagland explained that the $300 billion figure would be close to the estimated savings that the government would experience if the bill becomes law. This would be due in part to the drug pricing portion of the act, which would allow the government to use its massive buying power to negotiate lower drug prices over the next 10 years. He added that would result in a cost decrease:

Although there is a relation to "Obamacare" -- formally known as the Affordable Care Act -- in the bill, it is also misrepresented in the claim. Hoagland said:

Well, yes, there also in this bill was an expansion, a continuation of current policy related to the premium support that we put in last year's Biden bill and will expire at the end of this year. If you want to make the argument that you're paying for that expansion, which I don't think was anywhere near $300 billion over the next three years, that would be the only argument. But realistically, you're not cutting Medicare, particularly for individuals, you are saving individuals $300 billion going forward.

This is reflected in the summary of the bill published by Senate Democrats, which explains that the bill would "extend the expanded Affordable Care Act program for three years, through 2025."

Hoagland said that the Congressional Budget Office has not released a finalized budget estimate for the bill at the time of writing. But he added:

I just think that's really unfair to say you're cutting Medicare: in fact, you're helping Medicare recipients by reducing the costs that they would have to pay for prescription drugs...This one bothered me probably more than most as it relates to the advertisements that were being published at that time with the sole purpose -- it's clear -- with the sole purpose of killing the overall Medicare renegotiation package that was in the bill. Had very little to do with Obamacare or an extension of the expiring premiums from last year.

In an email to Lead Stories sent on August 9, 2022, Kim McIntyre, director of media relations for the Committee for a Responsible Federal Budget, referred us to a resource from the organization titled "IRA Would Lower Medicare Costs, NOT Cut Benefits" that was published on August 2, 2022. It opened:

Several political advertisements have made misleading attacks that the Inflation Reduction Act (IRA) would cut Medicare spending by $300 billion. In reality, the bill's prescription drug savings would save the federal government nearly $300 billion through 2031 without cutting benefits - and while actually reducing premiums and out-of-pocket costs by nearly $300 billion more.

Another non-partisan analysis of the bill from the Penn Wharton Budget Model can be found here and does not indicate that Medicare benefits would be stripped from recipients.