Did a man sit on a jet engine attached to the wing of an airplane while it flew over a city? No, that's not true: This video of a scene, which would be physically impossible to act out in reality, was created by Vietnamese content creator Huy Quan Hoa. He has produced a series of videos with the help of green-screen effects, where he appears to do improbable activities on the airplane's wing. Hoa has posted a behind-the-scenes video on TikTok about the making of this video, showing the green screen set up with him sitting on a green cloth while an assistant waved a fan to add the effect of his hair blowing in the wind.

The five short videos by Hoa were posted on TikTok individually in 2020. On December 17, 2020, a compilation video was posted on Hoa's YouTube channel that features all the shorts together. One of the video shorts was posted on Facebook on July 26, 2022, with this caption:

The account @huyquanhoa posted these videos as shorts on TikTok in 2020. The first was this scene, where he is sitting on the jet engine of a flying airplane. That video was followed by another video titled, "I'm VietNamese #huyquanhoa #trollgroup" In this video, side-by-side frames (detail pictured below) show the finished video and the green-screen footage used to produce it. Hoa, narrating in a third frame, holds up the colorful beach shorts he wore in the video, proving the video is his creation. A caption added to the video says, "I am Vietnamese This is my clip." These shorts appear in the other videos as well. 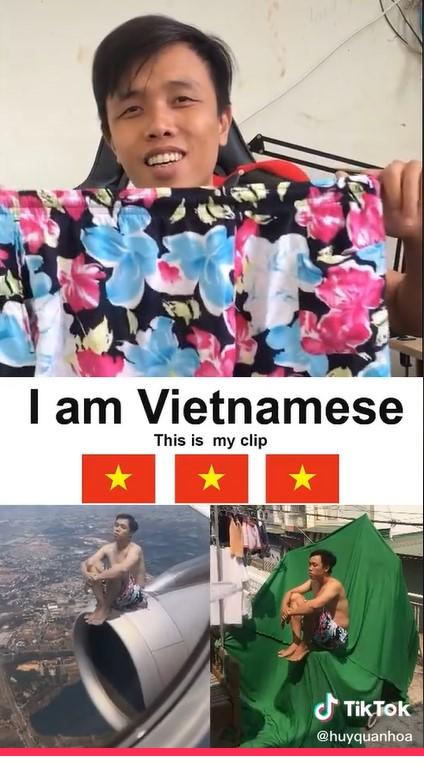 Hoa's YouTube video titled, "Tổng Hợp Huy Quần Hoa đi máy bay bá đạo" (Huy Quan Hoa flies on a plane compilation) is embedded below and includes scenes of sitting on the jet engine, napping on the jet engine, doing computer work at a desk, cooking with a wok and another nap on the wingtip.