Is there a facility where baby formula is being destroyed in order to create or prolong a baby formula shortage? No, that's not true: The logo that appears on a dumpster pictured in a TikTok video is that of Imperial Western Products. The company has several divisions, some of which recycle and refine a variety of materials for different purposes. One division offers a recycling service that separates food contents from the container, which would then be recycled separately.

Two videos were posted to TikTok by @mommabeartrucker. One of the videos was shared to Instagram on August 10, 2022. Later that day the original videos were removed from TikTok but are circulating on several social media platforms. The repost on Instagram was captioned:

davidjharrisjr
I am not saying that they are intentionally creating a baby formula crisis by destroying pallets and pallets of baby formula....... I'm not saying that 'checkers'.
But I am saying that this video demands an investigation and/or explanation!
ARE YOU KIDDING ME!!!!!
#baby #formula #crisis #to #control #the #population #and #food #supply #maybe
🎥 @thelonewolfgang 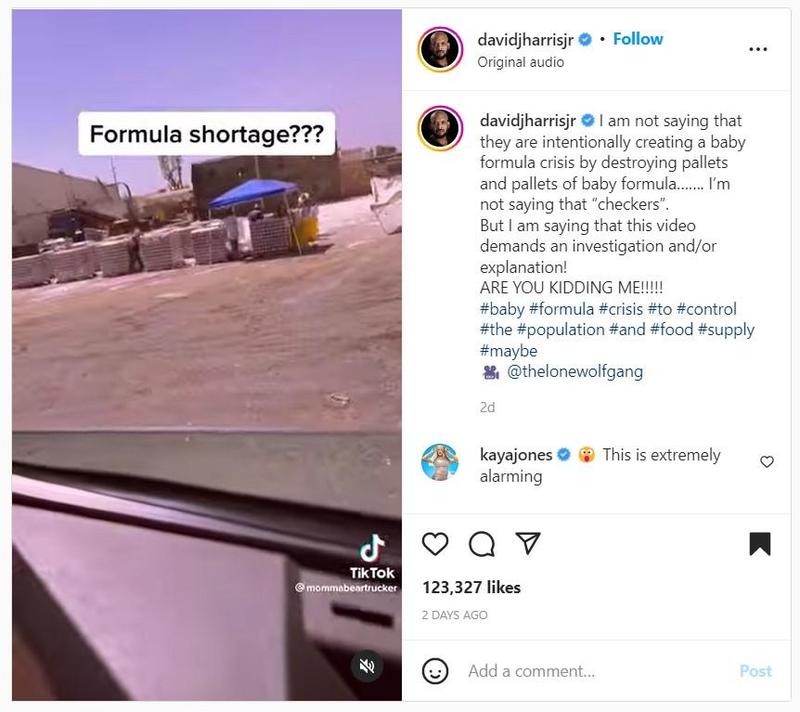 The first of the two videos features a woman filming from the driver's seat of a truck. First the camera is on her and then it turns to show the scene in front of her. In the Instagram version of the video, she says:

In the second video she continues:

Y'all I'm going to try to get as much of this as I can without anybody seeing. That is stacks, that's one of the mountains of baby formula cans they have. And there's thousands of pallets sitting all over there, all behind me, all in front of me. I've got a whole 45,000 pounds of baby formula.

A third video streamed live by @mommabeartrucker on the day of the delivery has also been deleted. A copy of that live video was reposted by @apathyalamode. In this video @mommabeartrucker answers some questions from the viewer's comments live. She says that the delivery was made to Coachella, California. She also held up some paperwork that shows, handwritten in ink, the street address of the IWP facility as well as the purported delivery, "baby formula". Lead Stories was not able to verify what was on the pallets shown in the video or what was being hauled in the truck, which was not shown in the video. If it was baby formula, the video does not demonstrate whether or not it was from lots that had expired or been recalled. On February 17, 2022, Abbott voluntarily recalled powdered infant formulas manufactured at the Sturgis, Michigan, plant. This recall and the subsequent closure of that plant contributed to a baby formula shortage that was already a growing problem in 2021, before the recall. 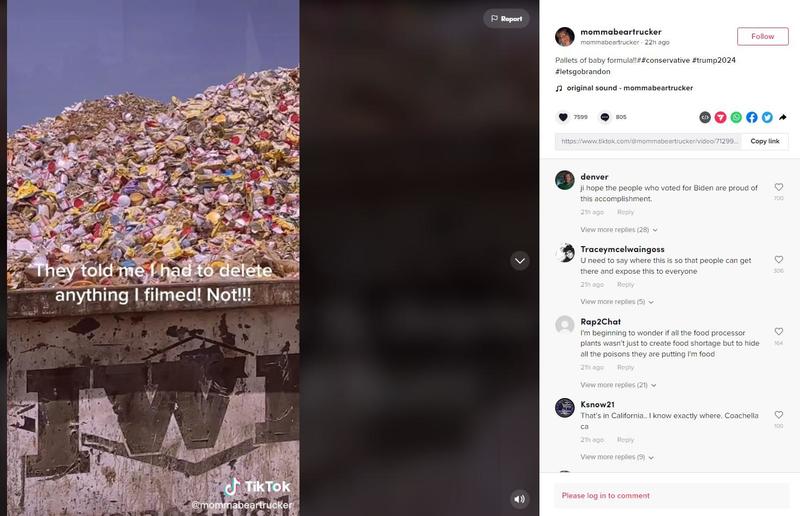 A screenshot of the second video as it appeared on TikTok before it was deleted can be seen above. In this video a dumpster bearing the "IWP" logo of Imperial Western Products is visible. This description can be found on the about page of the company website:

Imperial Western Products is setting the industry standard for proactive environmental protection and conservation.
A large portion of our products are recycled and refined byproducts that are environmentally safe, biodegradable, and non-toxic. We believe it is important to make an attempt to turn the supply chain into a supply loop, in order to maximize material efficiency and minimize waste streams that lead to environmental breakdown. Imperial Western Products is always looking for new ways to recycle diverse kinds of waste into new and useful byproducts.

The company has several divisions, one that makes biodiesel from recycled cooking oil, another that makes livestock feed from bakery products and another that offers a "zero waste" processing for disposing of packaged goods. From these videos it is not possible to determine what is being recycled or why, or what the end product might be, but it does not appear to be an activity falling outside the specialty recycling services offered by Imperial Western Products.

Lead Stories reached out to Imperial Western Products and will update the article if appropriate.