Does a reflection in an astronaut's helmet visor from the Apollo 17 moon landing prove that it was a hoax? No, that's not true: The reflection seen in astronaut Gene Cernan's helmet visor shows astronaut Harrison Schmidt standing in front of him on the surface of the moon in 1972. "The view is a little distorted due to the curvature of the visor, but it's him," astronomer and moon hoax expert Phil Plait told Lead Stories.

The claim appeared in a video (archived here) on YouTube on November 16, 2017, under the title "Reflection in a Visor. Where's the reflection of the camera taking the photo?" The caption for the video reads:

There is no backpack on the figure and even allowing for visual distortion due to the visor, surely you would see a backpack because they were extremely large.

Apollo 17 was the last landing on the surface of the moon in the 20th century. It took place from December 7 to 19, 1972. The crew included Eugene A. Cernan, Ronald E. Evans and Harrison H. Schmitt.

While the video claiming the landing was a hoax was published in 2017, it regained popularity in 2022 and has been referenced in news articles here and here.

The video has no music or narration as it opens. At 0:24 of the 4:02 video, a black and white still image of Cernan's visor has an inserted red circle around an object. At 0:36 the image has been enlarged to only show the image of what appears to be a person. The narrator claims at 2:03 that the image, "looks like a man ... back in the early '70s, long hair, you know, wearing some sort of, I don't know, waistcoat." The narrator claims at 3:17 that he is beginning to doubt the moon landing is real because, "where's this guy's spacesuit?"

"What we are seeing here is exactly what you'd expect of one astronaut taking a photo of another astronaut on the moon," Plait told Lead Stories via email on August 22, 2022. He explains what is seen in the image:

Gene Cernan is in his spacesuit in front of some large boulders. He's set up a small gnomon on a stand -- the metal pole points straight up -- to determine the slope in the photo and also the colors/shades of the rocks (this spot was called Geology Station 6 and was one of many interesting areas near their landing site they investigated).

[A gnomon, as used by astronauts, is a vertical rod on a tripod with the sun shadow cast by the rod used in determining direction.]

Here is the original image from NASA: 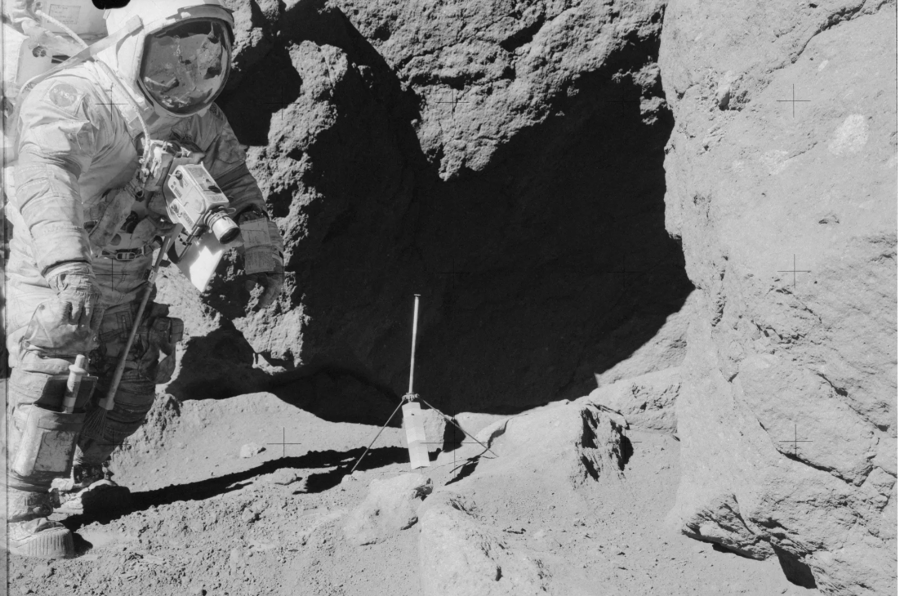 Plait explained in his email why the image was not a perfect reflection:

The photo was taken by Harrison Schmitt. It's Schmitt we see reflected in the visor! The view is a little distorted due to the curvature of the visor, but it's him. When you face a curved surface and take a photo, your reflection will appear on the visor on a straight line between you and the visor, and if you look at how the visor is curved that's exactly where Schmitt's reflection appears.

Plait posted his own drawing in an article he wrote on SYFY.com in 2017, where he previously debunked the claim, showing the difference between a curved and flat reflector: 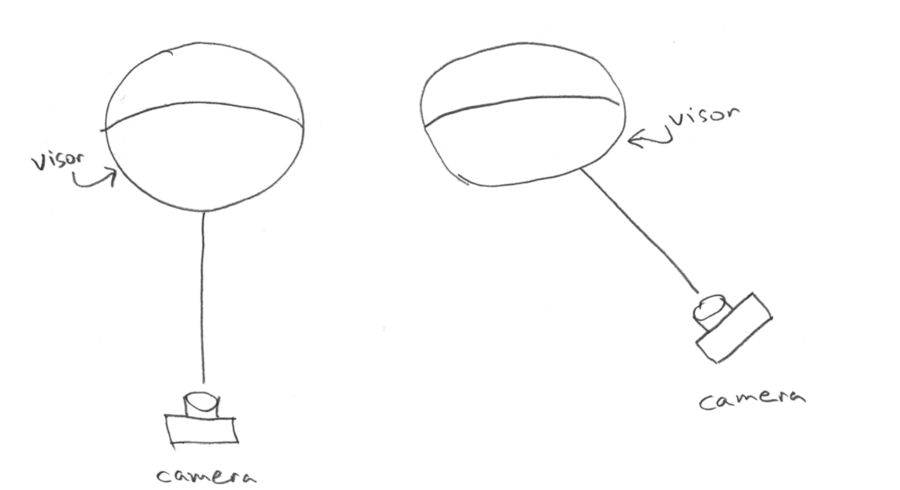 In that article, Plait speculated that the "backpack" mentioned was, "the Portable Life Support System on the back of the spacesuit. Certainly the shadow is far too wide to depict a person standing there without a spacesuit."

Plait dismissed in his email the claim that NASA would have missed the image of a stagehand or person on a set in the visor reflection. "To me it's clearly someone in a spacesuit. Even if you think NASA faked the Moon landings, do you think them so dull that they missed having a stagehand standing there taking the photo? Or just lollygagging around while the two men take photos on a multi-billion dollar hoax? Silliness."