Does consumption of irradiated foods cause cancer and other diseases? No, that's not true: Food irradiation is a well-studied, FDA-approved process that kills pathogens associated with foodborne infections; thus, also preserving food for longer. There is no evidence that it may cause cancer.

The claim appeared in a TikTok video on September 6, 2022. The caption began:

@Bonnie #knowledgeableone333 Food irradiation is the process of exposing food and food packaging to ionizing radiation, such as from gamma rays, x-rays, or electron beams. Research also shows that irradiation forms volatile toxic chemicals such as benzene and toluene, chemicals known, or suspected, to cause cancer and birth defects. 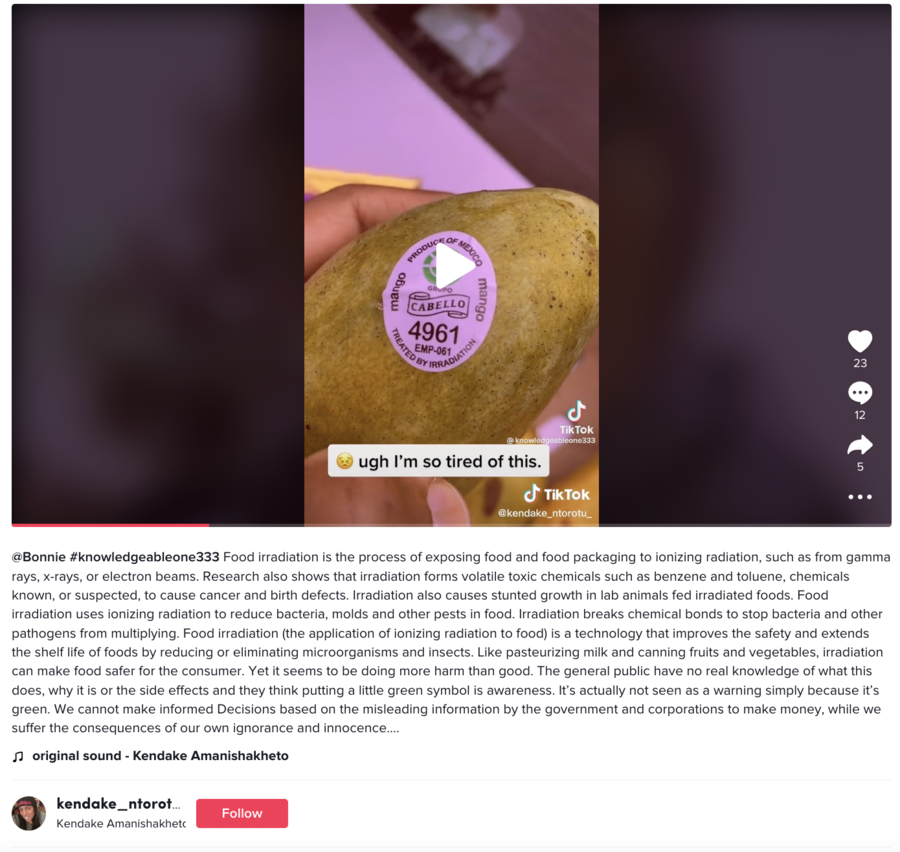 The video features a woman who accidentally spots a purple label on mangos. At the 00:16 mark, she says:

I was going to eat one of these mangos last night before I went to bed. And right off the bat, I had noticed the code on here.

I'm doing my research, basically. And this mango was exposed to radiation.

I don't know about y'all, but I'm just really getting bothered at the fact that the elites are just ... they're trying to give us cancer.

While irradiated foods do not qualify as organic under the U.S. Department of Agriculture's guidelines, that does not make them dangerous.

Irradiation does not make foods radioactive, compromise nutritional quality, or noticeably change the taste, texture, or appearance of food. In fact, any changes made by irradiation are so minimal that it is not easy to tell if a food has been irradiated.

The agency evaluates the source of radiation to ensure the method's safety. Currently, only gamma rays, X-rays and electronic beams are approved. The Environmental Protection Agency explains how it works:

The ionizing radiation sends enough energy into the bacterial or mold cells in the food to break chemical bonds. This damages the pathogens enough for them to die or no longer multiply, which reduces illness or spoilage.

The International Atomic Energy Agency defines radiation as "energy that moves from one place to another in a form that can be described as waves or particles." It emphasizes that not every form of it is dangerous to humans. The agency supports the use of food irradiation:

The process does not raise food temperatures, leaves no harmful residues and can be applied to packaged food, thus limiting the chances of re-infestation or re-contamination.

This process came into existence because some bacteria and microorganisms that may cause potentially deadly foodborne infections, including parasitic diseases, are very hard to eliminate by other means. These pathogens are typically found in meat, poultry, seafood (such as lobsters or oysters), lettuce, fresh fruits and vegetables. These are the same foods the FDA has approved for irradiation.

Even NASA uses irradiation for some food categories to protect astronauts from diseases, the agency confirmed to Lead Stories via email on September 8, 2022:

We don't use irradiation for food storage. However, we do send a few shelf-stable products that are processed with irradiation to reach sterility ...

In addition to the United States, this method is approved in more than 60 countries, including Canada, Brazil and China.

Food irradiation has been studied for over a century. In the United States, the first patents for killing bacteria with its help were issued as early as 1905; in the 1950s, the U.S. Army started researching the method's food preservation properties; and in 1986, the FDA officially allowed its use nationwide within the U.S.

A year later, in 1987, World Health, the World Health Organization's magazine, wrote that, despite all of the method's advantages, against the backdrop of the then-recent Chernobyl disaster, the public perception of food irradiation was rather negative:

The reluctance of consumers in some countries to accept irradiated food arises from the fact that anything associated with nuclear energy is considered by many people to involve danger and radioactivity. Furthermore, with the growing preference for fresh foods in developed countries, anything other than minimal processing and the limited use of additives in foods is increasingly seen as undesirable and possibly harmful to health. Food irradiation tends to be seen as yet another method of tampering with the natural properties of fresh foods. Even within the food industry, acceptance of the technology has come about only slowly as the benefits of the process became obvious.

In the field of medicine, diagnoses and treatments are carried out daily with the aid of radioisotopes. Disposable medical and hygienic products sterilized by irradiation are used regularly in hospitals and clinics all over the world. And like these medical products, foods processed under prescribed conditions for irradiation do not in any way become radioactive. Yet many people ignore this fact.

In 2020, the American Cancer Society confirmed that irradiation is still known as safe:

Moreover, a 2019 study concluded that irradiation can potentially decrease the concentration of other cancer-causing substances such as nitrates and nitrites in processed meat.

The description of the TikTok video contains sentences copied from a nonprofit called the Center for Food Safety. It is not a government agency or research institution, but describes itself as an entity that "has been at the forefront of organizing a powerful food movement that is fighting the industrial model and promoting organic, ecological, and sustainable alternatives." 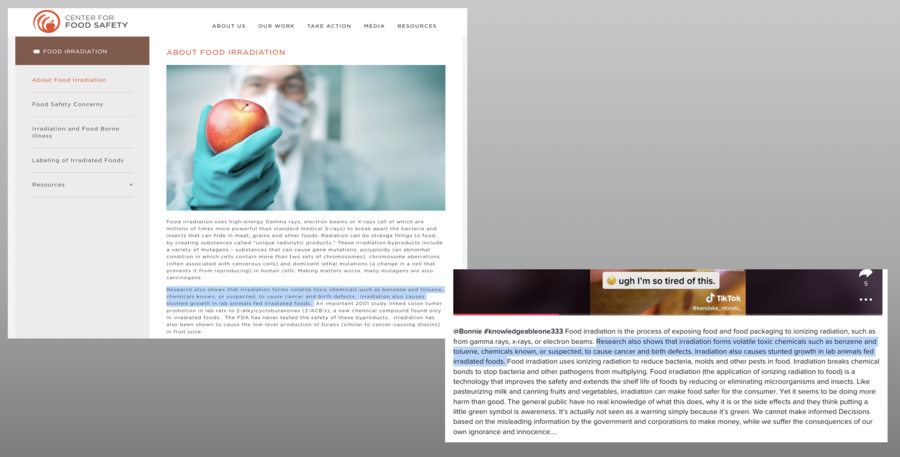