Did Russia publicly confirm the existence of a secret civilization under Antarctica? No, that's not true: The claim originated from a satirical fictional story labeled as such. The Russian government has never publicly revealed anything that would back up the existence of the purported "organism 46B" living under Antarctica. Many of the posts and articles implying the opposite in the opening lines also state that both Moscow and Washington, D.C., conceal the truth about the matter. In some cases, these entries even openly confirm that the entire story is a conspiracy theory.

The claim reappeared in a tweet published on August 30, 2022. It said:

According To Russia, Antarctica Is NOT What You've Been Taught To Think: Many sources claim that the Russian and American administrations have kept the truth about Antarctica hidden because both countries are aware that something

Here is what the entry looked like at the time of writing: 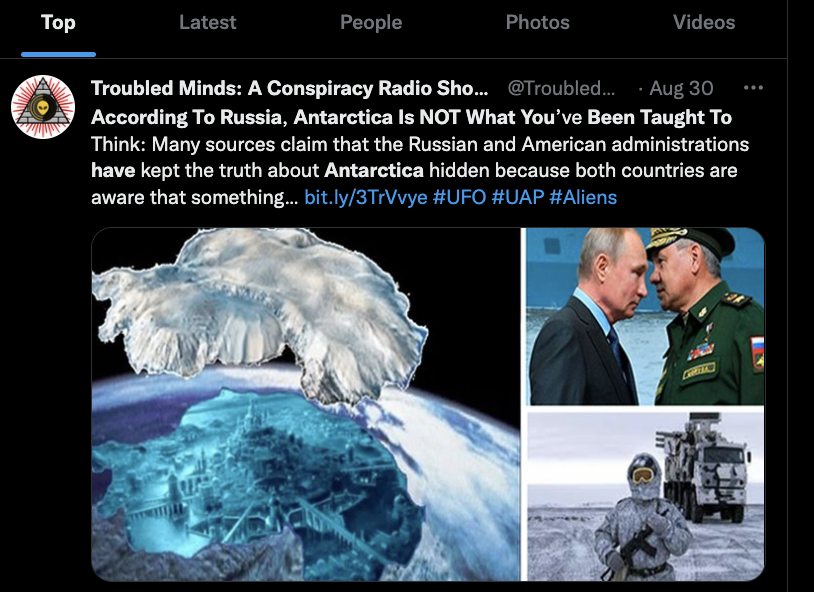 The tweet contained a link to an article published on August 9, 2022, on Alien-ufo-sightings.com. The piece opened:

Many sources claim that the Russian and American administrations have kept the truth about Antarctica hidden because both countries are aware of that something unusual is happening that godforsaken continent.

The second paragraph straightforwardly admitted a lack of supporting evidence:

As you may expect, these statements sparked a slew of conspiracy theories.

... a group of Russian scientists recently found Organism 46b, a massive organism.

This species appears to be able to use poison to immobilize its prey before ripping it apart. Many conspirators were inspired by this creature to think that horrific creatures lurked in the depths of this vast icy continent.

The specimen, which resembles an octopus with 14 arms, was transported to a laboratory for additional examination. Experts are examining the venom it generates for its potential. Furthermore, this beast has 'eliminated' one of the team members.

The title of this piece repeated the wording of the tweet: "According To Russia, Antarctica is NOT What You've Been Taught To Think." However, it did not reference any official government statements and failed to identify a single member of the supposed group of scientists who allegedly made the purported discovery. By the end of the piece, the article concluded:

We don't know much more about what's going on in Antarctica.

The UFO Sighting article was not published in a textual format, allowing fact-checking algorithms to "read" materials. Instead, it was added to the website as a picture.

On Facebook, this claim circulated at least since July 23, 2022. Those posts contained links to other articles published either by AlienHistory.Net or NewsIntact.com that were unavailable at the time of writing. However, those Facebook entries remained sharable, with the setting preventing people from posting them outside of the platform. Here is one of the examples: 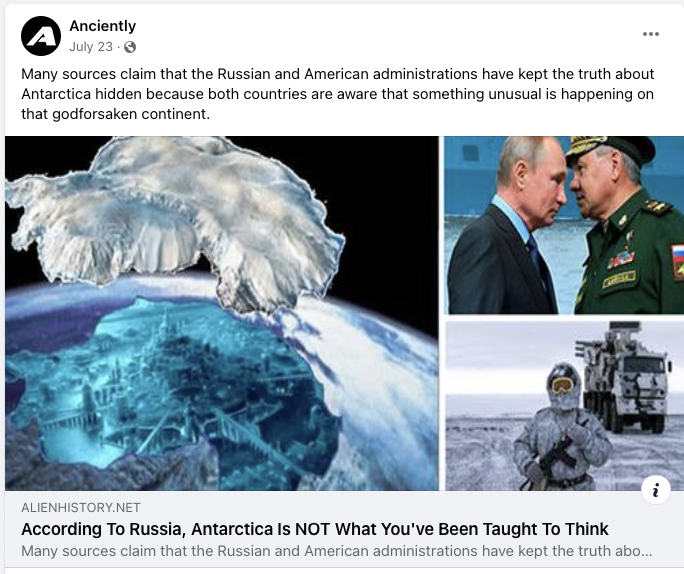 Lead Stories found zero evidence supporting the claim that the Russian government has ever made any statements revealing that "Antarctica Is NOT What You've Been Taught To Think."

The English-language version of the Russian federal government website does not show any results for the key search terms: 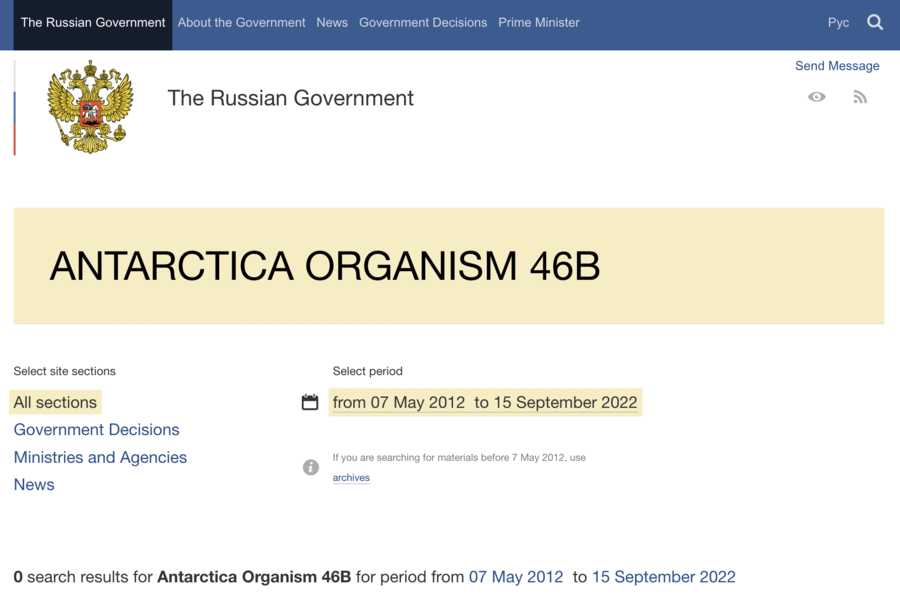 Lead Stories searched the Russian version of the website, but there were no results for the past decade, either.

Neither the Russian nor English versions of the Russian president's website showed any matches.

The creature named "Organism 46B" was created by the science fiction and satire writer C. Michael Forsyth. In August 2016, he wrote a blog post describing a story of a "defecting Russian scientist" who went missing for five days during an expedition to Antarctica. Below the entry, the author characterized his work as "mind-bending supernatural news satire by fiction writer C. Michael Forsyth," clearly indicating that the story was not based on actual events.

According to Politifact, the same piece was first published in September 2012 by Weekly World News, an outlet that used to print contemporary American folklore stories between 1979 and 2007 and then moved online. The current version of its website does not appear to contain any of C. Michael Forsyth's pieces.