Was a letter from the British Ministry of Defence about the Ukrainian Armed Forces' non-NATO-compliant level of training legitimate and "leaked" from the UK government to a website? No, that's not true: The published document's authenticity cannot be verified. Given several errors in English grammar and terminology, the document did not originate from the desk of the British Army Secretariat. Rather, it appears to be another falsified document in the propaganda campaign to disparage the training of the Ukrainian Armed Forces.

The letter was published on the website ussanews.com (archived here) on September 10, 2022, under the title "LEAKED UK MINISTRY OF DEFENCE LETTER SHOWS UKRAINE FAILING AT BASIC MILITARY SKILLS!" The article opened:

The above letter was leaked from the UK government and sent to USSA News.

The letter, from the Ministry of Defence, explains the challenges and failures of training the Ukrainian military by both the UK and NATO. 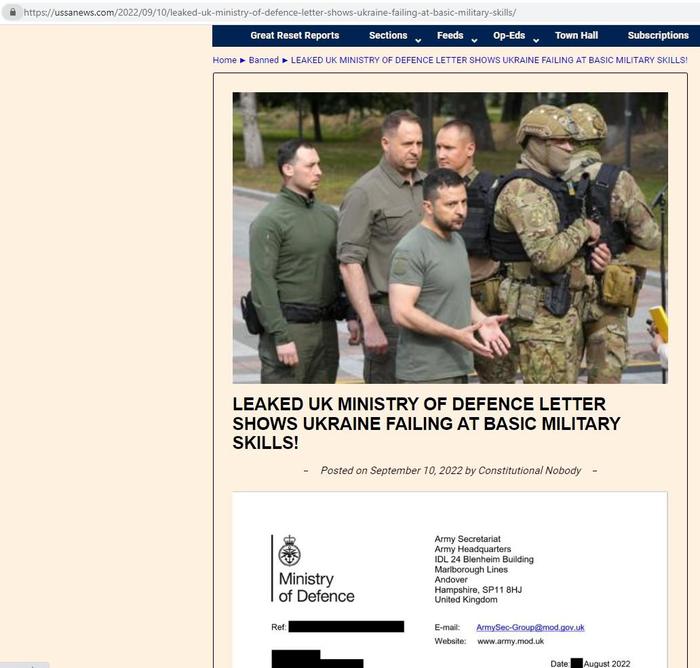 With the U.S. sending billions of dollars to Ukraine, one would think the Ukrainian military could acquire basic military skills in a short amount of time; however, this is not the case. Ukrainian trainees that are undergoing basic training courses in camps all over the UK are failing at an alarming pace.

This explains both the Ukrainian failures during their counter-offensive operations and massive unnecessary military spending of the UK/NATO countries amid severe social and economic crisis.

The Twitter account Oliver Martin, which uses the handle @OliverKaufman7, posted the letter (archived here) with a link to the USSA News article on September 12, 2022. The tweet cites USSA News as its only source. It reads:

USSA News does not state how it acquired the supposed letter.

The document's letterhead matches British Ministry of Defence letterhead that can be found through a reverse image search or on a UK government publications website.

Yet while the purported letter retains the letterhead's British spelling of "defence" in "Ministry of Defence," the document's first paragraph spells "defence" as "defense," the American spelling.

In the second paragraph, the letter writer refers to the "British Royal Army." There are British military corps, regiments and units, such as the 1st Regiment Royal Horse Artillery, that include the word "Royal" in their name, no British Royal Army exists. The UK's land-based military force is simply called the British Army.

Below is a copy of the document, which Lead Stories has marked as fake. We have highlighted in red questionable spelling, grammar and phrasing. These instances suggest that the writer of this document was not a native English speaker.

The redactions in black are part of the original forged "leaked' letter. 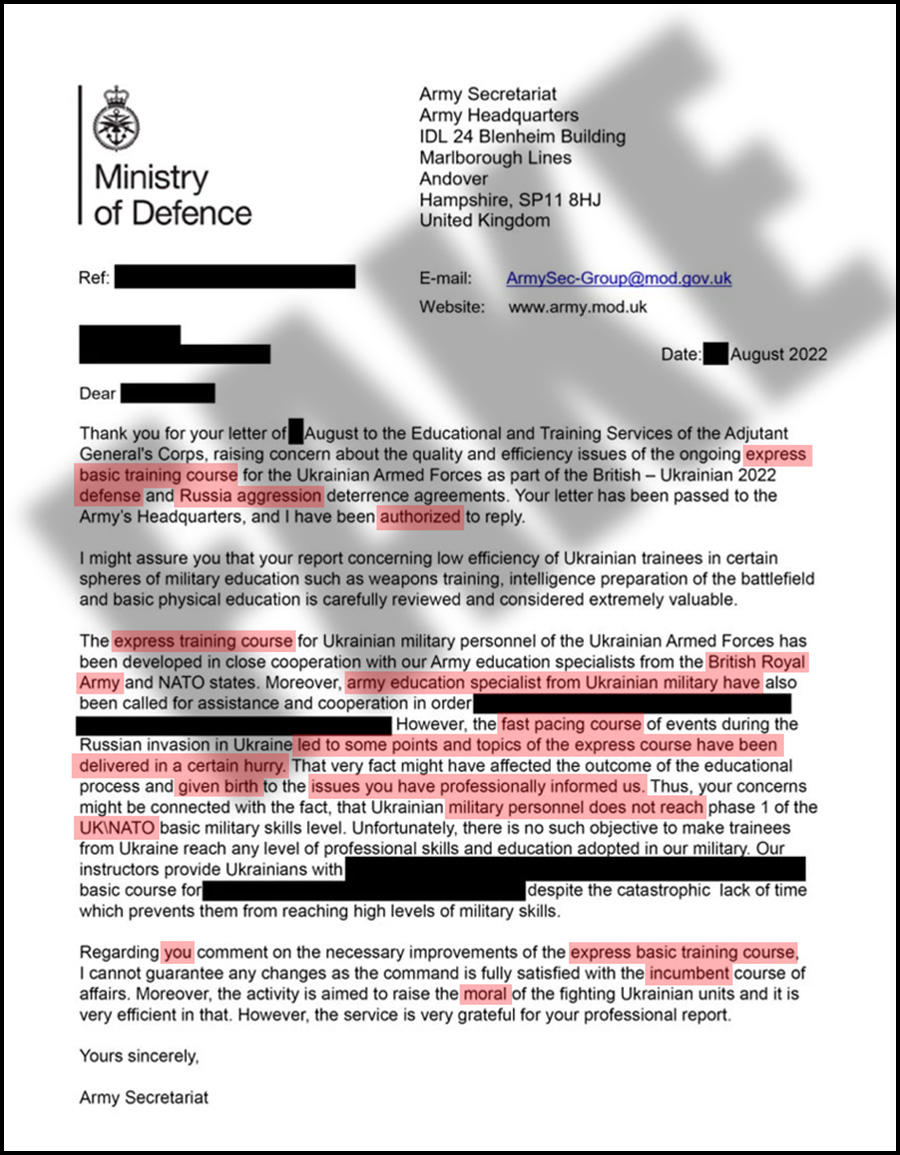 One phrase that appears several times in this document is "express basic training course." The British Army does not offer such a course. The only item that matches a Google search query for this name is a September 5, 2022 article on the Russian website YA VATNIK (I AM A VATNIK; "vatnik" refers to a Russian government supporter -- ed). The article refers to another forged document that surfaced in early September 2022.

That document, posted on Telegram and Twitter on September 3, 2022, by @anon_candanga (archived here) was also debunked by Lead Stories. The document also described the Ukrainian army's supposedly unsatisfactory level of combat-readiness. It was made with a real U.S. Army form that is publicly accessible online and can be filled in and then printed. The form, though, is used for evaluations of individual army personnel, Lead Stories reported.

Set up in July 2022, @OliverKaufman7 follows only two accounts and has only three followers. Below is a Lead Stories composite image of these two accounts, which form a link to @anon_candanga from @OliverKaufman7. Both accounts introduced forged documents featuring an "express basic training course" that does not exist except in these documents.

Lead Stories contacted the British Ministry of Defence by telephone on September 14, 2022. They declined to comment.