Did Rep. Elise Stefanik angrily call Rep. Adam Schiff a "lying son of a bitch" during a meeting in Congress? No, that's not true: This post has a clickbait headline apparently to draw attention to a Facebook page. In only a portion of the video in this post, Stefanik criticized Schiff during her remarks over a whistleblower in a 2019 meeting. She never used the phrase "son of a bitch" in referring to Schiff. 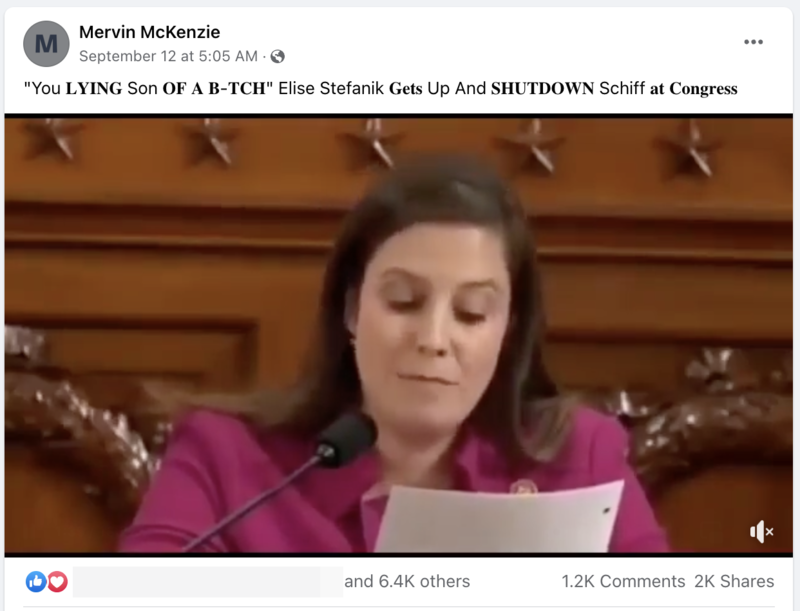 In the first portion of the video, the footage shows Stefanik criticizing Schiff over a dispute concerning the appearance of a whistleblower in a Permanent Select Committee on Intelligence meeting on November 15, 2019. The rest of the video displays Rep. Chip Roy during an unrelated meeting and then Stefanik at a press conference about immigration policies. At the press conference, Stefanick does not mention Schiff.

During the 13-minute, 27-second video of her remarks, Stefanik never refers to Schiff using any profanity. At the time of writing, a search of Google News produced no stories about "Rep. Elise Stefanik Calling Out Adam Schiff."

This is not the first time Lead Stories has reported on political clickbait headlines in social media posts. Similar fact checks can be found here and here.