Does a video show Sen. John Kennedy "exposing" Hunter Biden, son of President Joe Biden, in Congress? No, that's not true: The video in a post making the claim shows an unrelated clip of Kennedy questioning voting rights activist Stacey Abrams of Georgia in a Senate Judiciary Committee hearing. The post has a clickbait headline apparently to draw attention to a Facebook page.

The claim appeared in a Facebook post (archived here) on September 13, 2022 under the title "We Need To Stop Him, Or America Will 𝐂𝐫𝐮𝐦𝐛𝐥𝐞!- John Kennedy 𝐄𝐗𝐏𝐎𝐒𝐄𝐃 Hunter Biden 𝐢𝐧 𝐜𝐨𝐧𝐠𝐫𝐞𝐬𝐬." The video opened with Sen. Cory Booker speaking: 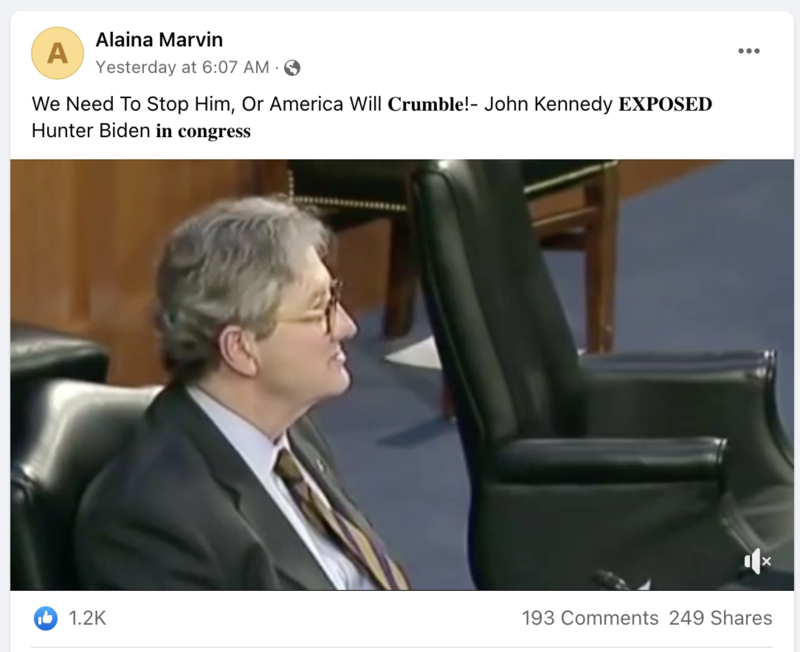 The footage shows Kennedy questioning Stacey Abrams on voting rights in a Senate Judiciary Committee hearing on April 20, 2021. During the seven-minute, 17-second video of his remarks, Kennedy never mentions Hunter Biden or says anything about "exposing" him.

At the time of writing, a search of Google News produced no stories about "John Kennedy exposing Hunter Biden in congress."

This is not the first time Lead Stories has reported on political clickbait headlines in social media posts. Similar fact checks can be found here, here, and here.