Was the second plane to hit the World Trade Center on September 11, 2001, a military plane? No, that's not true: The plane that hit the south tower was United Airlines Flight 175, a commercial plane. The 9/11 Commission Report described "The Hijacking of United 175" with eyewitness accounts including phone calls made from the plane.

The claim was inferred in a video (archived here) where it was published on Facebook on September 11, 2021, but was going viral again on September 6, 2022, as the anniversary of the attacks approached. It opened:

THE FOOTAGE THEY DIDN'T WANT YOU TO SEE 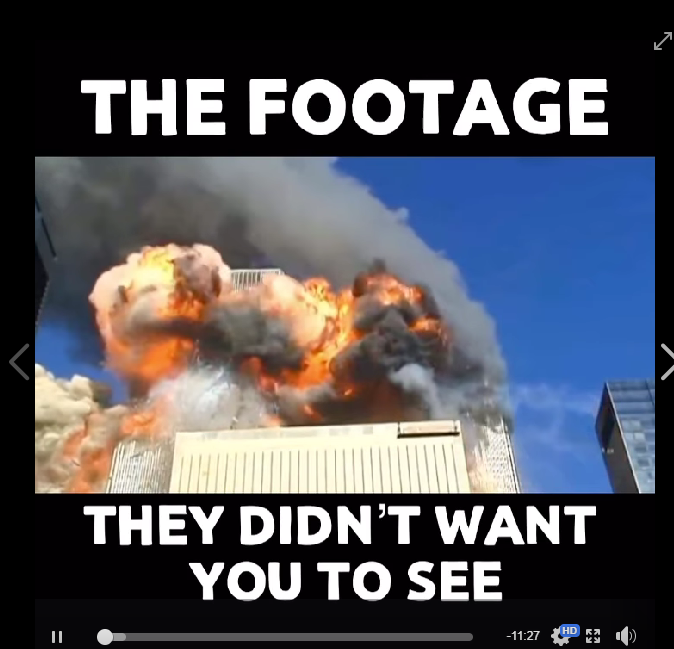 The 11-minute, 33-second video is a compilation of man-on-the-street type interviews done apparently immediately during or after the 9/11 attack, with most if not all of the footage aired on news coverage over the last 20 years. The video has no narration to tie it all together and uses a clickbait headline, "THE FOOTAGE THEY DIDN'T WANT YOU TO SEE," but none of the scenes or interviews are new. There is no secret or previously hidden footage that provides proof that the plane that hit the south tower was a military plane or that the explosions in the two towers were from anything other than the destruction that planes caused when hitting them.

The first two-minutes of the video shows the plane hitting the tower and in various positions before impact. The clear implication from the video's use of witness comments and speculation on that day is that it was a military plane that struck the tower. The rest of the video has footage of the twin towers exploding and more news footage of people discussing what happened as the events were unfolding.

At the 20-second mark in the video the image is of the Twin Towers with smoke billowing out as a voice says, "No, wasn't no commercial airliner... the first one I never saw, second one I saw was big, but it didn't have any markings on it that I saw...no emblems no logos."

At :48 a man in the video says, "The plane wasn't no airliner or anything. It was a twin engine big grey plane."

At :56 a caption appears with no attribution and no matching voice below the plane. It reads, "KC767 military planes have the same shape as United 175."

1:04 a person describes what they thought they saw, "It definitely didn't look like a commercial plane, I didn't see any windows on the side."

A photograph on the Alamy photo agency website of the wreckage of the plane that was taken on October 25, 2001, shows windows on the body of the aircraft. The caption reads, "A portion of the fuselage of United Airlines Flight 175 on the roof of WTC 5, Oct. 25, 2001. This was from the plane that crashed into the South Tower, WTC 2. World Trade Center, New York City, after September 11, 2001 terrorist attacks."

The 9/11 Commission Report details how hijackers entered Logan International Airport in Boston and boarded United Airlines flight 175 . Pages 7-8 of the report give a minute-by-minute account of passengers and flight attendants contacting people from phones on the plane. It then describes how all communications ceased at the time that the plane flew into the second tower. From page 8:

At 8:58, the flight took a heading toward New York City.

At 8:59, Flight 175 passenger Brian David Sweeney tried to call his wife, Julie. He left a message on their home answering machine that the plane had been hijacked. He then called his mother, Louise Sweeney, told her the flight had been hijacked, and added that the passengers were thinking about storming the cockpit to take control of the plane away from the hijackers.

At 9:00, Lee Hanson received a second call from his son Peter:

It's getting bad, Dad--A stewardess was stabbed--They seem to have knives and Mace--They said they have a bomb--It's getting very bad on the plane--Passengers are throwing up and getting sick--The plane is making jerky movements--I don't think the pilot is flying the plane--I think we are going down--I think they intend to go to Chicago or someplace and fly into a building--Don't worry, Dad-- If it happens, it'll be very fast--My God, my God.

The call ended abruptly. Lee Hanson had heard a woman scream just before it cut off. He turned on a television, and in her home so did Louise Sweeney. Both then saw the second aircraft hit the World Trade Center.

At 9:03:11, United Airlines Flight 175 struck the South Tower of the World Trade Center.51 All on board, along with an unknown number of people in the tower, were killed instantly.

The victims from United Airlines Flight 175 are listed at the 9/11 Memorial & Museum.

The U.S. Department of of Defense posted an article on in August 2021 with the title, "8 Things You May Not Know About Our Air Defense on 9/11."

Noting that "There was a lot of initial confusion," that day and, "Just 10 minutes elapsed between the time Powell took the first call to NEADS about the hijackings to when the first plane, American Airlines Flight 11, hit the North Tower -- not enough time to get fighters into the air." There were four planes that were hijacked and crashed. The article states:

Lead Stories has written about several claims concerning the 9/11 attacks. You can see those stories here.