Does a form circulating on social media show an official report of the American military describing as unsatisfactory the level of the Ukrainian army's preparedness? No, that's not true: This form, easily downloadable from one of the U.S. Army websites, is not intended to be completed for this type of large-scale assessment -- instead, it is for counselors working with American soldiers individually.

The claim originated from a Telegram post published on September 3, 2022. The entry opened:

The Americans inspected the process of training the Ukrainian military in the #UK and The conclusions are disappointing. August 2022 report.

The level of firearms and tactical training of the Armed Forces of Ukraine is extremely low, morale and motivation are absent.

Presumably, some of those who were trained on British soil were involved in unsuccessful attempts to attack in the Kherson direction at the end of August. #Ukraine 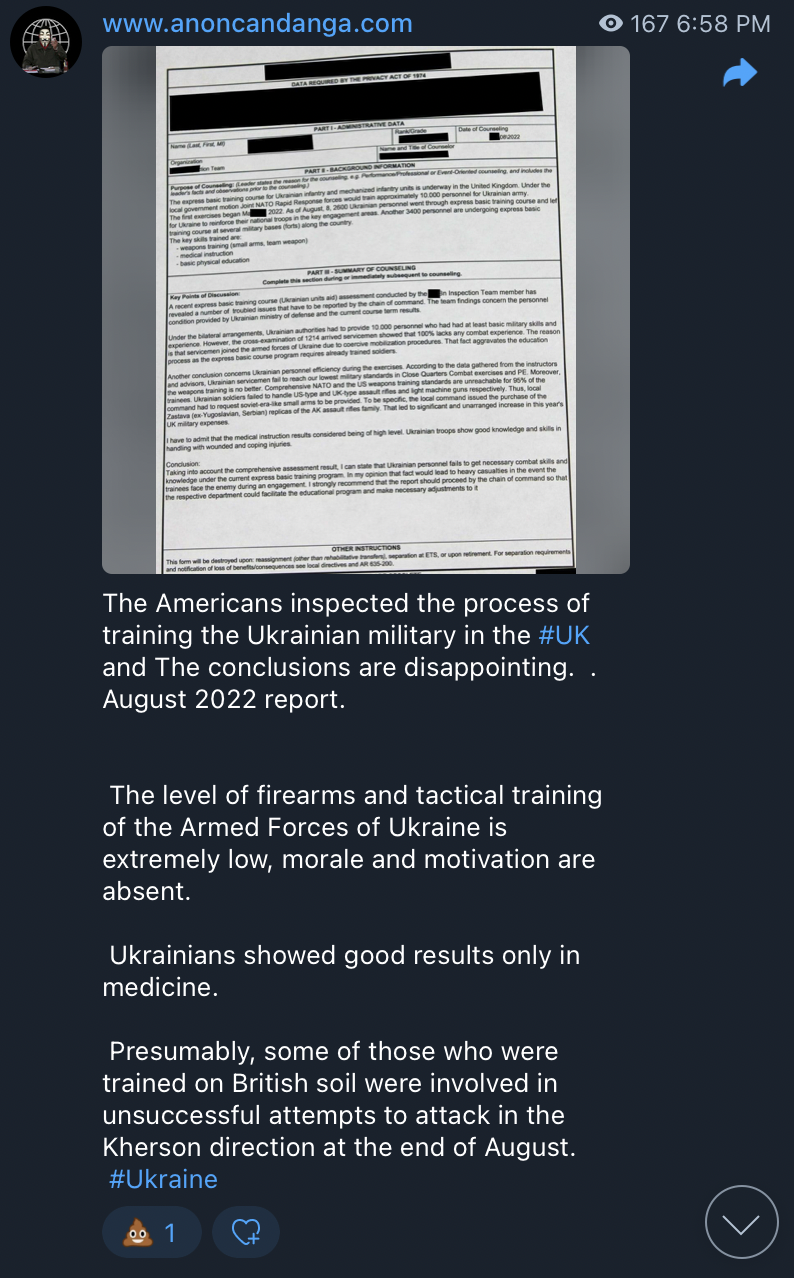 The attached form, however, is not used for filing reports on foreign troops being trained by allied nations. Instead, it is used for individual counseling sessions of American soldiers and is easily available on one of the U.S. army's official websites:

Lead Stories verified: Everyone can open the form with ready-to-type-in fields and save it as a PDF file or print it out, creating an officially-looking "document" such as the following review of a fictitious soldier named "Darth Vader":

As the screenshot above shows, the form's purpose is also described at the top of the page. This explains why these fields were blacked out in the purported document that appeared on Telegram, as if they contained personal or classified information:

A reference to the Privacy Act of 1974 remained unchanged in the disseminated "document." This law has nothing to do with military assessments -- it restricts release of information about a particular person federal agencies, making it highly questionable that the content of such a form would ever be published by the US military on social media:

The Privacy Act prohibits the disclosure of a record about an individual from a system of records absent the written consent of the individual, unless the disclosure is pursuant to one of twelve statutory exceptions.

Moreover, as the bottom of the form's first page says, these records are not stored for a prolonged period of time:

Additionally, anyone taught in the American education system is highly unlikely to express a number in the thousands using a decimal point -- as in "10.000." In contrast, in Russia, decimals are written with a comma, while whole numbers that contain at least four figures are typically written with a point, separating every three digits counted from the right. This points to Russia as the origin of the fake document.

The website promoted in the Telegram post - anoncandanga.com - does not disclose anything about the people or entities behind it. However, its creators ask visitors to donate money via PayPal and cryptocurrencies or buy military gear from its store. The collection of materials posted on the website predominantly contains of videos produced by RT, a Russian state-owned media enterprise previously known as Russia Today.

The same claim about an alleged "inspection" organized by the American military in the UK appeared on Russian-language pro-Kremlin Telegram channels (for example, here). Also publishing such an inspection report: a pro-Kremlin Russian-language website, with letters ZOV added to its logo to highlight its loyalty to Moscow. The site targets the Russian-speaking population in the Kherson region of Ukraine, currently occupied by Russian forces. In some other cases, the purported document was presented as a part of the official report of the Russian military on the situation in Ukraine. However, at the time of writing, neither Russian nor English verified Telegram accounts of the Russian ministry of defense appeared to have published anything similar on September 3, 2022, the day of this post.

Lead Stories reached out to the Pentagon for comments. When we receive a response, this article will be updated as appropriate.