Is turpentine a proven, safe remedy for parasite cleanses? No, that's not true: It's a paint thinner that, if consumed orally, may be lethal even in small amounts, especially in children.

The claim first appeared in a TikTok video on April 6, 2022.

#greenscreen This is the only parasite cleanse you'll ever need! #parasite #parasitecleanse #detox #naturalhealing #turpentine #foryou

Stop scrolling! If you're looking for a parasite cleanse, your mind is about to be blown.

The host briefly describes parasite symptoms and moves to advertising his "remedy" at the 0:23 mark:

All you need is your turpentine pure gum spirits, three sugar cubes, a lemon wedge and a dropper. And you can get these sugar cubes from just about any grocery store. The key is to stack the sugar cubes and drop them with turpentine until each cube is completely absorbed. And there, you have it. Don't let it scare you. Turpentine is simply pine resin. It actually has a really pleasant piney smell.

Here is how the video appeared at the time of writing: 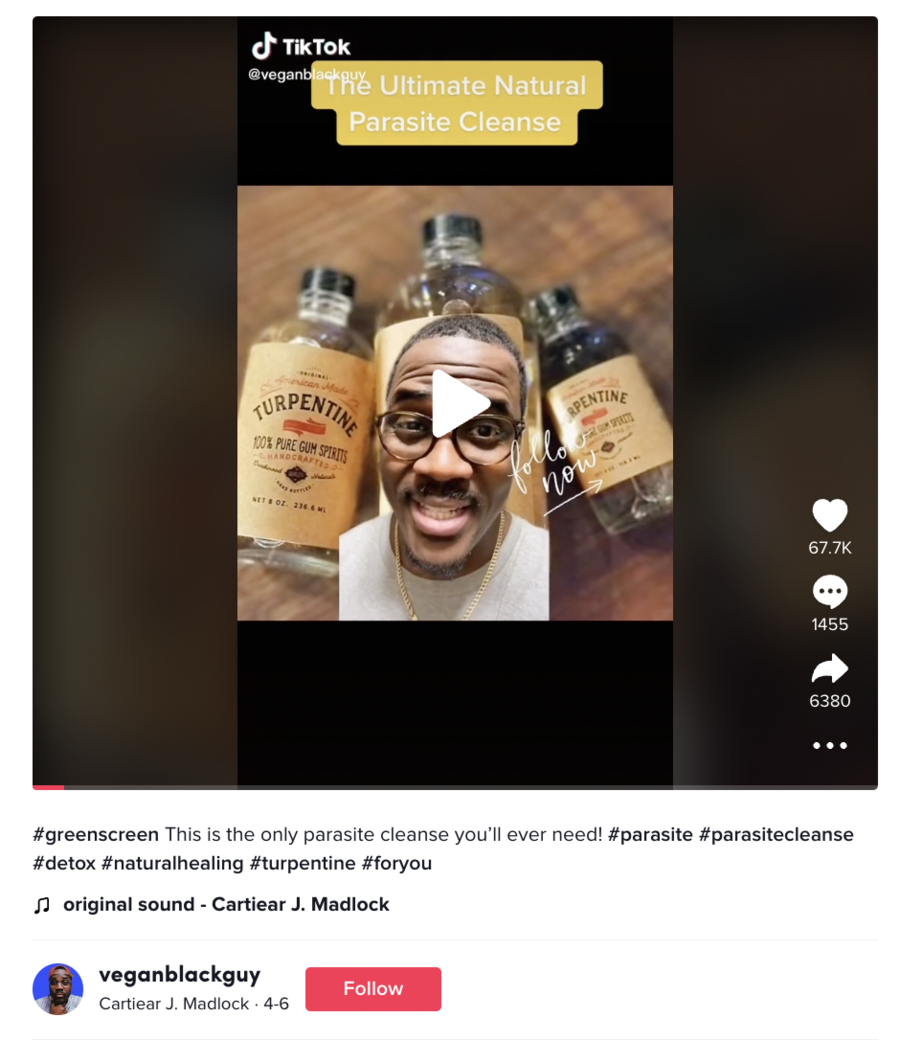 The clip was published by the account of Cartiear J. Madlock, the founder of the Vegan Black Guy website, an online store that sells sea moss and other supplements.

Made from the resin of pine trees, turpentine oil is mostly known today as a paint thinner. It is also used in microdoses in chest rubs, household cleaning solutions and cosmetics such as soaps. Two hundred years ago, turpentine was widely prescribed against diseases like malaria and worms, but at the turn of the 20th century, physicians switched to safer options.

If taken orally, turpentine oil is very toxic. According to Mount Sinai, one of the major Manhattan-based hospital networks, turpentine poisoning may result in loss of vision, kidney failure, seizures and burns of the esophagus. Natural Medicines, an evidence-based supplement database, warns that even very small amounts of this oil may cause death if ingested directly:

According to the Centers for Disease Control and Prevention, parasites can live in the bloodstream and into the skin or in the lungs. Humans may get parasites through animals, mosquito bites or contaminated water or food. Infections, including the ones caused by parasites, can be prevented by practicing good personal hygiene, following a food safety protocol and vaccination.