Are Federal Reserve notes -- commonly known as paper money -- just "obligations" and therefore exempt from taxes? And does the U.S. Constitution say gold and silver are the only form of "lawful money" to be used in paying debts? No, neither of those claims are true. The Constitution does not specify any particular form of currency, and under federal law, Federal Reserve notes are subject to being taxed.

The claim appeared in an August 25, 2022, Facebook video post from the page The Orgonized Earth. The 3:09 video opens with a narrator saying, as he gestures toward what appears to be a page from a guide to the U.S. Constitution:

OK. Article one, section 10, clause one. Here we go. What is money? Do we have money? According to this, the only real money is gold and silver for a payment of debt, OK. So we're going to call that lawful money, right? 'Cause that's the law. The Constitution is the law of the land. 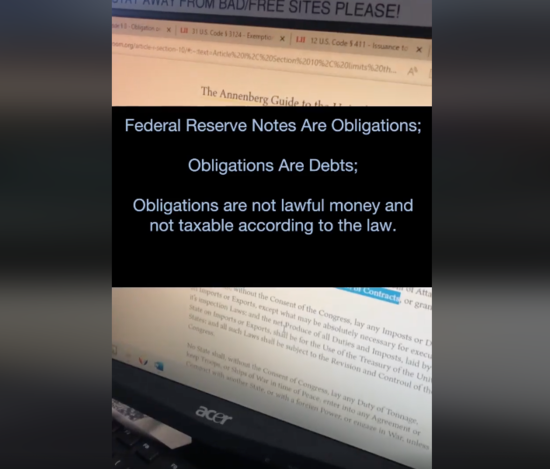 Text that appears on screen in the first seconds of the video says:

Obligations are not lawful money and not taxable according to the law.

Although the post also carries a text disclaimer that states: "This is not tax or legal advice and is solely for educational and entertainment purposes," the narrator cites various sections of the Constitution and federal codes. He states at the 2:25 mark that Federal Reserve notes are "not lawful money, not gold and silver."

Lead Stories reached out to Erin Scharff, a professor of tax law at Arizona State University's Sandra Day O'Connor School of Law. Schaff responded by email on September 5, 2022, saying the claims are false because they misread and misinterpret what the Constitution and federal laws say about money and taxation:

It appears to me that the author of the post has simply strung together unrelated snippets of law and asserted some sort of magic 'anti-tax' argument. It's legal alchemy, and like alchemy, won't produce any gold.

Article 1, Section 10, Clause 1 doesn't say the metals are the only form of lawful money for the payment of debts; the term "lawful money" doesn't even appear in the text. Many other currencies, such as paper money, or bills of credit, both of which were issued by state or private banks as well as other entities, were in circulation at the time the framers drafted the Constitution in 1787, said Brian Domitrovic, the Richard S. Strong Scholar at the nonprofit Laffer Center.

The intent of the section, which carries the title "Powers Denied to States," is to place limits on what states may do, including their ability to establish their own currency, unless it's in coins, he explained in a phone call to Lead Stories on September 2, 2022.

"That's what it means, that states are not allowed to issue paper currency, but if you want to make currency, that's fine, but it has to be gold and silver coin, which is about the state making payments itself," Domitrovic said. "And I would not argue as [the narrator] does that gold and silver is the only lawful money, because I know that the federal government at that time took whatever it was willing to from you."

The term "lawful money" didn't appear in federal statutes until 1913, when Congress passed the Federal Reserve Act, setting up the Reserve as a national bank with the goal of creating a more stable financial system, according to historical information from the Reserve's website. Federal Reserve notes, which have become synonymous with the dollar, were first issued after the law was passed.

In 1933, Congress, which has the power to make currency and impose taxes, amended the Federal Reserve Act to more clearly define that all forms of U.S. currencies, including coins and Reserve notes, are lawful money that can be used to pay all debts, including taxes, the Reserve's site also explains.

That nullifies the post's claim that Reserve notes are not lawful because they are paper, not gold or silver. The notes also can't be redeemed in gold; that ended with the Federal Reserve Act, Domitrovic said.

The narrator misreads the "plain language" of the laws he cites in making claims throughout the post, Scharff said, including when he states that the phrase "obligations of the United States" includes Federal Reserve notes. In this context, she said an obligation does mean U.S. debt, but not dollars. Rather it's defined in the next section of the code as notes, bonds and other forms of government-issued financial instruments of value.

Even if the narrator was correct in saying obligations are dollars, nothing in 31 US Code § 3124, makes them exempt from federal taxation, Scharff said. The provision only exempts interest on federal debt from state taxation. Scharff explained:

It says 'stocks and obligations' can't be taxed by a state or a political subdivision of a state. We've had an income tax system for a long time. There's no constitutional or other Achilles' heel to the income tax that would render it unenforceable, which is precisely what this post is claiming.

According to the Internal Revenue Service, many Americans have challenged Article 1, Section 10 in the federal courts, claiming, as the post does, that Reserve notes are not valid. Those arguments have been rejected on multiple occasions by the courts, which have held that "Congress has declared Federal Reserve notes legal tender ... and federal reserve notes are taxable dollars."

Lead Stories has written about other taxation claims, you can see those stories here.