Did President Joe Biden order the replacement of the U.S. dollar with a trackable spyware version of digital money that will give the government control over the bank accounts of all Americans? No, that's not true: None of that language appears anywhere in the order, a spokesman for the U.S. Treasury told Lead Stories.

Biden did sign a March 2022 executive order directing U.S. agencies to research the future of money and digital payment systems, which could lead to the development of a central bank digital currency (CBDC).

The claim appeared in a September 26, 2022, Instagram post under the title "ARE YOU PAYING ATTENTION!?!😡" It includes a video warning that the president has replaced dollars with a "spyware" version of money. It opens:

Where were you on March 9th, 2022 when President Biden signed the death warrant on American freedom? On that day, in a hushed ceremony at the White House, without the approval of Congress, the states or the American people, Biden signed into law Executive Order 14067.

Buried in his order are a few paragraphs titled Section 4. The language in Section 4 makes order 14067 the most treacherous act by a sitting president in the history of our republic, because Section 4 sets the stage for legal government surveillance of all U.S. citizens, total control over your bank accounts and purchases, and the ability to silence all dissenting voices for good. 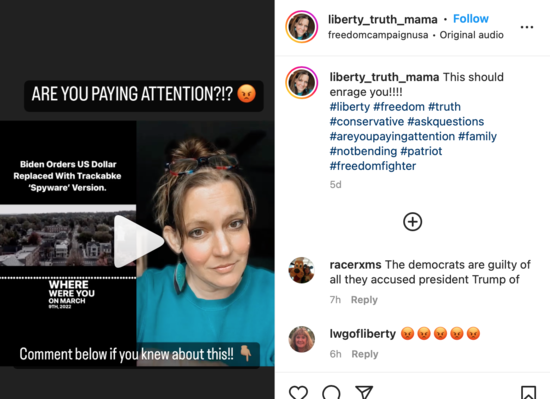 This is false. Executive Order 14067 does not mandate replacing the dollars with a spyware type of digital currency system that gives the government the power to control the bank accounts of U.S. citizens, surveil their purchases or silence dissent.

None of that language appears anywhere in the order, a spokesman for the U.S. Treasury told Lead Stories in an email on September 29, 2022. It also does not mandate the creation or adoption of national CBDC, the spokesman said.

Rather, the "Ensuring Responsible Development of Digital Assets" order Biden signed on March 9, 2022, calls for a government-wide assessment of the risk, opportunities and benefits of digital currency systems and associated technologies, a White House fact sheet states.

It further lays out six policy priorities, including consumer and investor protection, the stability of the U.S. financial system and U.S. leadership and economic competitiveness in global financial systems.

Under the order, Biden gave federal agencies including Treasury, the State Department, Justice and other relevant departments 180 days to conduct research and prepare a report on the future of money, including an examination of the conditions that drive adoption of digital assets, technology innovations and the impact of modernization and change on payment systems, economic growth, financial inclusion and national security.

Justice released its version of the report on June 6, 2022, and the Commerce Department's report posted to the agency's website on September 1, 2022.

Treasury issued its report to the president on September 16, 2022, the agency spokesperson said, adding that it does not "authorize or endorse the creation of a CBDC."

That video features author and economist James Rickards, who has in the past advised federal agencies and Congress on potential financial threats to the country.

Over 40 minutes, Rickards shares his opinions on the purported dangers of the order's intent to create trackable digital currency -- which he calls "Biden Bucks" -- and promises to share secrets for surviving its effects. Ultimately, the video is a solicitation that invites viewers to join an "elite" group of subscribers to Rickard's monthly "Strategic Intelligence" financial newsletter at a discounted price.