Did a video posted to Facebook in September 2022 show the body of the late Queen Elizabeth II being placed into a coffin? No, that's not true: The video in question was originally posted to social media more than three weeks prior to the queen's September 8, 2022, death. While the post does not make the claim outright, its timing and content -- clergy with an ornate coffin in an equally ornate chapel -- implies it. Commenters quickly picked up on the suggestion, with one saying, "This is not Queen Elizabeth, I live in London fake."

The 1:16 video posted on Facebook by the account Ayinke streaming yardon on September 9, 2022, showed men in clerical garments placing what appears to be a body in an ornate coffin. Posted one day after the death of Queen Elizabeth II, with the title "Rise in glory," the video implies that the scene was related to events in the United Kingdom following the queen's death.

Not only was the video originally shared on social media more than three weeks before the queen died, but it also appears to show clergy from the Roman Catholic Church, not the Church of England, a Protestant denomination. In the footage, the individuals place a statue in a coffin-shaped box, close the box and place a crown-like object on top.

A closer look at the video reveals a TikTok watermark with the username @tvdelrei2022. The video was originally posted on that TikTok account on August 15, 2022. Other videos posted to the account appear to show religious ceremonies, churches, religious statues and members of the clergy.

This video on the TikTok account had the hashtag "#igrejacatolica," Portuguese for "Catholic Church." A Reuters report found that the video footage was captured during a service at The Cathedral-Basilica of Our Lady of the Pillar (translated from Portuguese: Catedral Basílica Nossa Sehora do Pilar), in the Brazilian city of São João del Rei. The 2022 celebration of the Assumption of Mary, a Catholic recognition of the day Mary was said to ascend to Heaven, fell on August 14 -- one day before the video was posted to social media.

Photographs of the event were shared by the church on Facebook and several videos of the livestream were also made available on the church's YouTube channel, several of which (here, here, here, and here, for example) show the statue on what appears to be an altar. A magnified screenshot of the reposted TikTok video shows the statue being moved from that altar and into a coffin-shaped box: 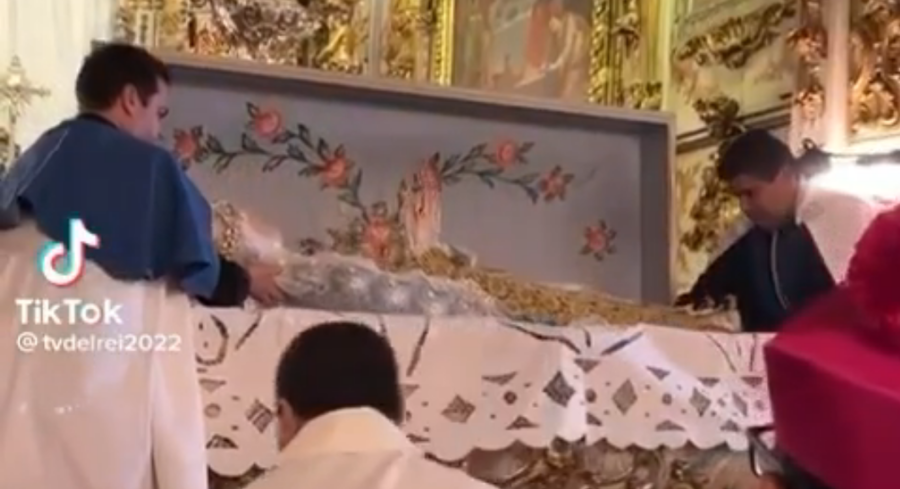 The São João del Rei Diocese also posted to its webpage photographs of the occasion that corroborated the video. A description of the event, written in Portuguese and translated to English, noted that the celebration began on August 5, 2022, and lasted for 10 days.

Queen Elizabeth II, like all British monarchs since King Henry VIII, headed the Church of England, which broke with the Roman Catholic Church in 1534.

Church of England clergy traditionally wear vestments in white, green, red, purple or blue; not in the style of the white surplices featured in the video.

Official photographs of Queen Elizabeth II's coffin in its September 11-12, 2022, procession from Scotland's Balmoral Castle to the Palace of Holyroodhouse and St. Giles' Cathedral in the Scottish capital, Edinburgh, also do not resemble the coffin seen in the TikTok video. An image shared by the British royal family's official Twitter account shows a coffin draped with the royal standard of Scotland and topped by a wreath of flowers: 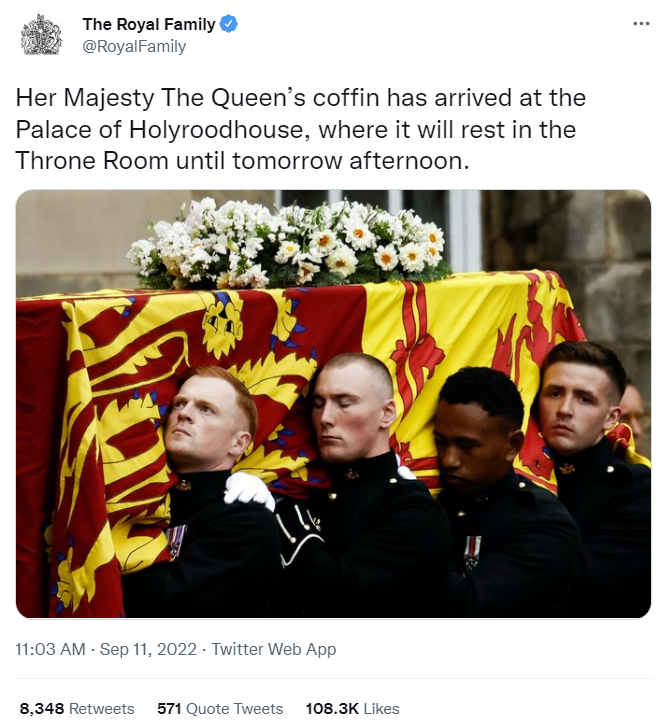