Were mental health professionals at the Wisconsin Pride festival in August of 2022 "just handing out" letters declaring patients' readiness for gender affirmation surgery? No, that's not true: letters were not handed out. A photograph of a booth at the Magic Pride Festival in Madison offering free "Letters of Readiness," service is real. But, the letters were not handed out to people at the festival and the claim was made with no evidence anyone was handed a same-day letter at the festival. A counselor who participated said a letter of readiness could be prepared and sent at a later date, but only if the person requesting one provided the required information and went through a session with a mental health professional.

'Letters of Readiness for Surgery' were available for free at the Madison, Wisconsin Pride festival this weekend, for those identifying as trans or non-binary. This is 'gender-affirming care.' 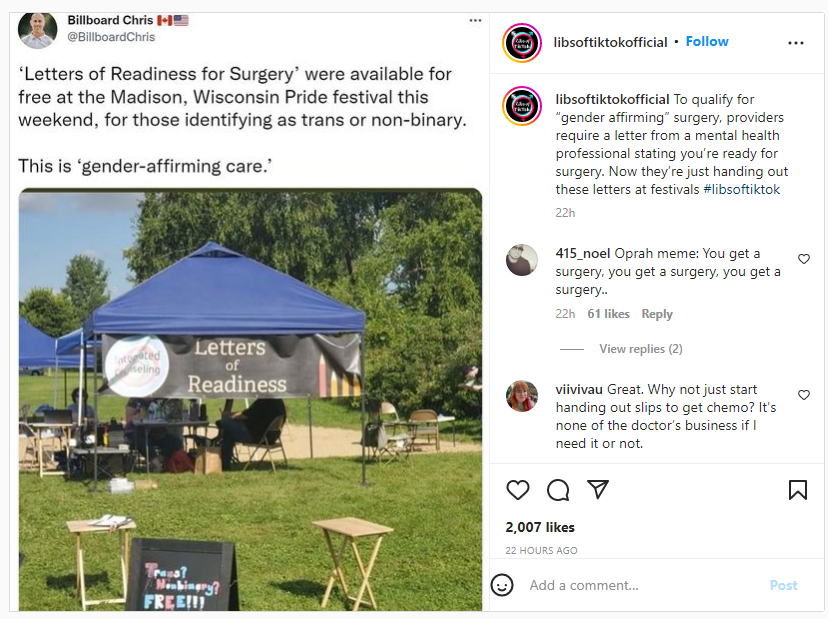 To qualify for "gender affirming" surgery, providers require a letter from a mental health professional stating you're ready for surgery. Now they're just handing out these letters at festivals #libsoftiktok

It showed an image of a blue tent on grass with a sign hanging from it that read, "Letters of Readiness," with a logo that read, "Integrated Counseling LLC." A small chalkboard in the lower left corner of the image read, "Trans? Nonbinary? FREE!!!"

Lead Stories reached out to Ben Rader, a licensed clinical psychologist who volunteered his time at the booth at the festival, and he responded by email on August 30, 2022, confirming he donated his time to Integrated Counseling at the Madison Magic Pride festival on August 21, 2022.

Integrated Counseling LLC did not respond to multiple requests for comment from Lead Stories.

Rader said that letters were not handed out at the event and that the letters "will take weeks to complete." He explained the process, saying they began with collecting basic information and identification from people. There was a paper "screener" form reviewed by staff to ensure the individual met the criteria for participation. Rader said:

We then did extensive interviews (mine going over 2 hours) with the individual, collecting information on overall health and mental health, personal history, gender identity history, their process in transition, understanding of desired intervention (surgery or hormones), and preparedness for the procedure. This afforded us a capacity to also assess the cognitive, intellectual, and decision making capacities for the individual in the given setting.

Finally, we will now be working on 'writing up' and making sense of everything. The letter is literally a letter that includes recommendations catered to the individual and based off of their expressed desires. The letter is intended to be informative and descriptive of the individual's pursuit of transition interventions from a medical provider, who would then use our information to inform whatever decision they ultimately make.

"Heavens no," Rader told Lead Stories when asked if there was a blanket letter that was issued to anyone that asked. "This would literally defeat the entire purpose of helping people make informed decisions about their health, and assessing their capacity to do so."

The University of Wisconsin School of Medicine and Public Health has a description of Letters of Readiness for Gender Affirmation Surgery on its website: