Does former President Donald Trump get a tax break for his golf course where his ex-wife, Ivana Trump, is buried? No, that's not true: The small portion of the property at the Trump National Golf Club Bedminster where Ivana Trump is buried was previously farmland and exempt from taxes. However, now that it began use as a cemetery taxes will be applicable, the Bedminster, New Jersey Municipal Clerk told Lead Stories.

This portion of the property was approved for use as a private family cemetery by the Bedminster Township Land Use Board in 2013, according to documents obtained by Lead Stores. The area does not affect the tax status of the rest of the property at the Trump National Golf Club Bedminster.

Donald J. Trump buried his EX-WIFE at HIS golf course for the sole purpose of getting HIS golf property labeled as a 'cemetery'. 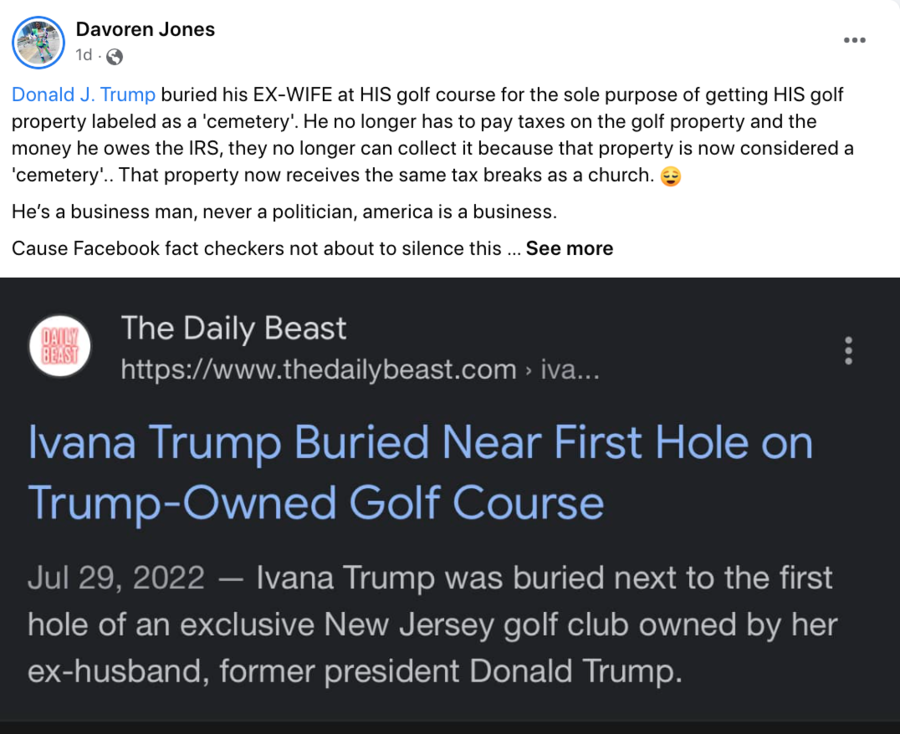 Robin Ray, the Bedminster, New Jersey municipal clerk, told Lead Stories via telephone on October 7, 2022, that the Lamington Farm Club LLC, which does business as Trump National Golf Club Bedminster, applied for a use variance for a 10-plot private family cemetery in 2013. It was approved and memorialized in a Land Use Board meeting on November 14, 2013.

While the 60 foot by 95 foot property was previously in a farmland assessed area, which receives a tax break, Ray said, "Now that there is a change in use it is no longer farmland. Now that it is an active cemetery it goes back into the tax rolls and now it is being taxed."

Lead Stories obtained the resolution of approval from the Bedminster Township Land Use Board that was decided on September 12, 2013 and memorialized on November 14, 2013. According to the documents, several of the requirements for the cemetery were:

Ray told Lead Stories the property assessment would be completed by the tax assessor by the end of 2022:

Everybody has this wrong. It is a very small section. That's the most important thing. It is .13 of an acre. It is 5,700 square feet. Now that it becomes in use there is going to be a three-year roll back. They take the year that the property comes out of farmland assessment and take two prior years and that is how it is taxed. It is based on an average of three year. It is no longer in the protected class of farmland. It is regular land and it is taxed more than the farmland.