Do rock formations that resemble elephants prove that giants once ruled the world? No, that's not true: These two formations -- one in Heimaey, Iceland, and the other off the eastern shore of Molokai in the U.S. state of Hawaii -- were both created by volcanic activity and ocean waves.

They were not carved by the hands of a race of giants nor are they petrified remains of giant elephants. The tendency for people to perceive these rock formations as elephants stems from a phenomenon called pareidolia. From certain angles, the rocks' elephantine features stand out more strongly; from others, the rocks do not resemble elephants at all.

Collections of images of elephant-shaped rocks presented together and captioned as if all the photos show the same formation have circulated online since at least 2017. One video was posted on TikTok on March 1, 2022, and was also posted on Facebook as a reel. The reel was captioned:

The text captioning in the video reads:

Proof Giants Once Ruled The World

This is how the video appeared on Facebook Reels at the time of writing: 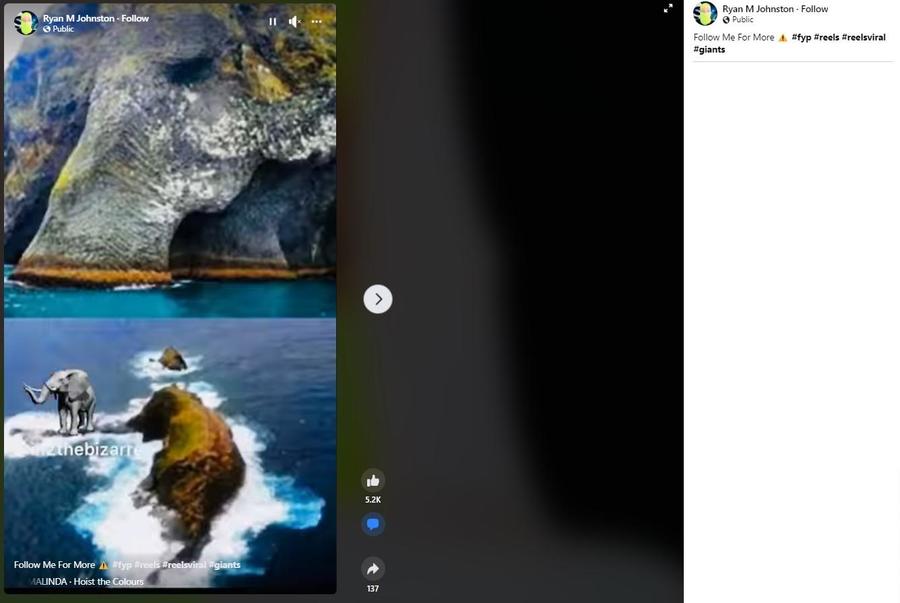 The video on Facebook has three segments. The first segment shows the host, in a neon green mask, pointing up to the text caption "Proof Giants Once Ruled The World." The second clip is a video that shows Heimaey, Iceland's "Elephant Rock," set amid waves crashing against the rocks and sea birds soaring past. The video's last segment (pictured above) shows still images of two different rock formations: Iceland's "Elephant Rock" in the upper half and, in the lower half, an aerial photo of Mokuhooniki, an island off the eastern shore of Molokai, Hawaii.

Both rock formations have been cited on social media as petrified or fossilized elephants and other creatures. The title of one video about Iceland's "Elephant Rock," posted on YouTube on March 6, 2016, declares "Elephant Rock was actually ALIVE Once." The caption states that "this was a real creature petrified in the great flood."

The word "mimetolith" -- derived from the Greek "mimetes" for "imitation" and "lithos" for "stone" -- is often used to describe such rock formations. One former American professor of geology, Richard V. Dietrich, published an illustrated overview of such formations that can be downloaded from the library of Central Michigan University.

Perceptions of these formations as actual elephants, sea turtles or other wildlife stems from a phenomenon called pareidolia, which is defined by the Merriam-Webster Dictionary as "the tendency to perceive a specific, often meaningful image in a random or ambiguous visual pattern."

The first "Elephant Rock" featured in the video posted on TikTok and Facebook is part of the Vestmannaeyjar archipelago off the coast of Heimaey. The archipelago's islands were formed during the Holocene Epoch, within the past 11,700 years, according to a 2006 academic study on the islands' volcanic activity.

The "Elephant Rock" itself formed after a large volcanic eruption on January 23, 1973, according to a U.S. government booklet about the eruption. The lava and cinder from this eruption buried towns and altered the shape of the island's eastern coastline and harbor. The coastline on the western side of the island where the elephant-like rock is located was not changed, the booklet (page 6) reports. The "Elephant Rock" is made of basalt, a type of volcanic rock, which adds to the illusion of an elephant's wrinkled skin.

Roughly 6,135 miles to the southwest, the Hawaiian island of Mokuhooniki, the second rock formation featured in the video, frequently resembles a surfacing sea turtle, with one flipper rising from the water (see below). This island, though, has two different nicknames: "Elephant Rock" and "Turtle Rock." It all depends on the viewer's angle. 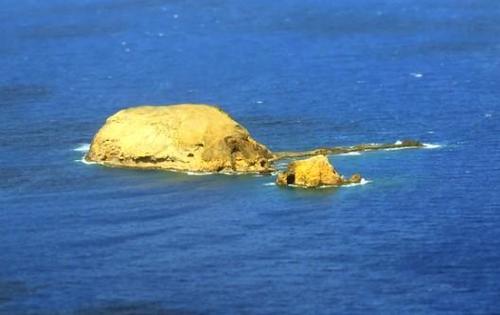 (Source: Flickr.com Photo by Harold Hollingsworth taken on May 14, 2011)

Mokuhooniki (its ancient name means "pinch island") does not resemble an elephant from most angles, as this drone footage shows. The location, however, is a popular spot for helicopter tours. The tourist industry emphasizes the island's resemblance to an elephant.

In reality, Mokuhooniki is a tuff, or ash, cone. A 1964 U.S. Department of Commerce report called "Coastal Geology of Hawaii" identifies it as such on page 34:

The Pleistocene history of Molokai was chiefly one of erosion. 'Severe stream and marine erosion on East Molokai exposed its caldera complex. Evidence of various changes of sea level are present on Molokai. Only two young secondary eruptions are known, a moderately large basalt lava cone that built Kalaupapa Peninsula., and the small tuff cone of Mokuhooniki off the east coast.

An article on volcanoes from the Department of Earth Sciences at Germany's Free University of Berlin describes the formation and usual locations of tuff cones:

A tuff (or ash) cone is formed by explosive (and therefore potentially hazardous) phreatomagmatic eruptions (the interaction of basaltic magma and water). Tuff cones thus tend to be found near the water's edge or just offshore. Tuff is composed of extremely fine-grained cemented volcanic ash.

None of these writings mention giants to explain the rock formations' origins.

Additional Lead Stories fact checks of claims related to giants can be found here and here.