Does use of birth control pills, classified by international cancer researchers as a Class 1 carcinogen, mean that a woman will develop cancer? No, that's not true: Decades of research show that oral contraceptives do not significantly increase the likelihood that women will develop certain cancers. The pills can, in fact, reduce the likelihood of other cancers.

The claim about birth control pills appeared in an October 4, 2022, slideshow on Instagram. This fact check addresses only the first photo in that slideshow.

The photo, which shows an upset woman, is titled "WHEN YOU FIND OUT THE INTERNATIONAL AGENCY FOR RESEARCH ON CANCER (IARC) CLASSIFIES BIRTH CONTROL AS A CLASS 1 CARCINOGEN."

The modern world is a scam. The birth control. The food. The water. The clothes. The dopamine. The jobs. The researchers. The materialism. The casual sex. The 'experts'.

This is why everyone is so lost and confused.

We've been completely misled. Nothing can be trusted today.

Here's how the slideshow image looked at the time of writing: 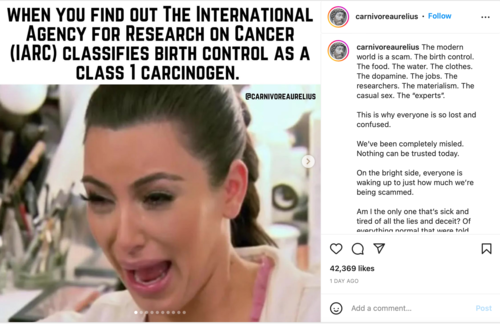 The post is misleading and lacks context because it fails to say that more than two decades of research show that birth control use has both benefits and risks for women -- a fact acknowledged by the very organization the slideshow names, the International Agency for Research on Cancer (IARC), an arm of the World Health Organization.

Furthermore, the post implies that using oral contraceptives will result in a cancer diagnosis. That's not true. Researchers have identified carcinogenic properties in dozens of other commonly used items such as alcohol, household cleaners and tobacco, as well as from a person's exposure to the sun, but those carcinogenic properties do not necessarily result in a cancer diagnosis.

As the American Cancer Society notes on its website, "carcinogens do not cause cancer at all times, under all circumstances."

According to the National Cancer Institute, the female hormones estrogen and progesterone, in their natural state, can stimulate the growth of some cancers. Synthetic versions of the hormones, which are used to make birth control pills, have that same potential and can increase the risk of some cancers, including breast and cervical cancers.

The IARC has been providing lists of the carcinogenic risks of chemicals since 1971. An advisory committee of experts reviews scientific research to evaluate the strength of the evidence for the environmental factors or other agents that may present hazards. An explanation of how the evidence is evaluated can be found on the IARC website.

Experts classify the potential risks on a scale of 1 to 3 -- from the most carcinogenic to chemicals that cannot be classified as carcinogenic. IARC has labeled 122 agents as Class 1, including combined oral contraceptives, which are the most commonly used form of birth control and contain both estrogen and progesterone.

The IARC does place estrogen-progesterone oral contraceptives in the Class 1 category of risk. Its entry, however, has a notation that "there is also convincing evidence in humans that these agents confer a protective effect against cancer in the endometrium and ovary."

The entry can be seen here: 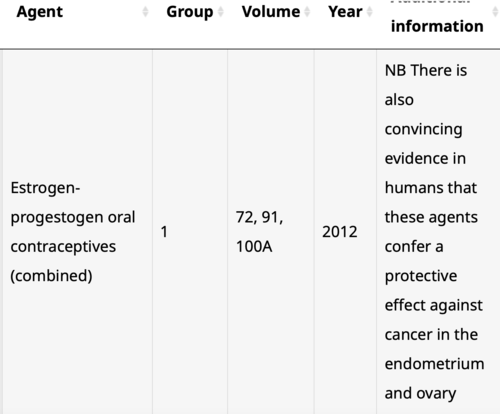 As early as the 1980s, researchers investigating the relationship between the birth control pill and cancer in American women have found its use did not significantly increase the risk of breast cancer.

In fact, the National Cancer Institute's Cancer and Steroid Hormone Study found that oral contraceptives appear to decrease the risk of developing ovarian and endometrial cancer. A variety of factors, such as the age of a woman, the number of years on birth control and the type of contraceptive used, can alter the level of risk, however.

Such findings have been repeatedly confirmed over some two decades by researchers around the world, including in Canada, Sweden, Denmark and the United Kingdom. A catalog of research papers, some of which address specific types of cancer, can be found within the archives of the National Cancer Institute and the National Library of Medicine.

This is how the National Cancer Institute summarized these studies in a fact sheet on oral contraceptives and cancer risk:

Overall ... these studies have provided consistent evidence that the risks of breast and cervical cancers are increased in women who use oral contraceptives, whereas the risks of endometrial, ovarian, and colorectal cancers are reduced.