Did Charlie Hebdo, a French satirical weekly, mock Ukrainian President Volodymyr Zelenskyy by portraying him on its cover as "an obedient dog" eating out of a "European" dog dish? No, that's not true. The publication has stated that this cover image and two similar ones circulating online are fake.

The weekly now charges that "Russian propagandists" on Telegram "are creating false covers of Charlie Hebdo to make people believe in our magazine's support for Putin."

One example of these fake covers appeared in a Facebook post on September 1, 2022. It features a caricature of French President Emmanuel Macron aiming a water canon at apparent critics or protesters.
The caption reads:

The French: The water is warmer here!*

Zelensky: * an obedient dog at the European feeder*

It seems that in Europe they are beginning to suspect...

("The water is warmer here!" is a mistranslation in the post's text. The text actually says "It's warmer at home!") 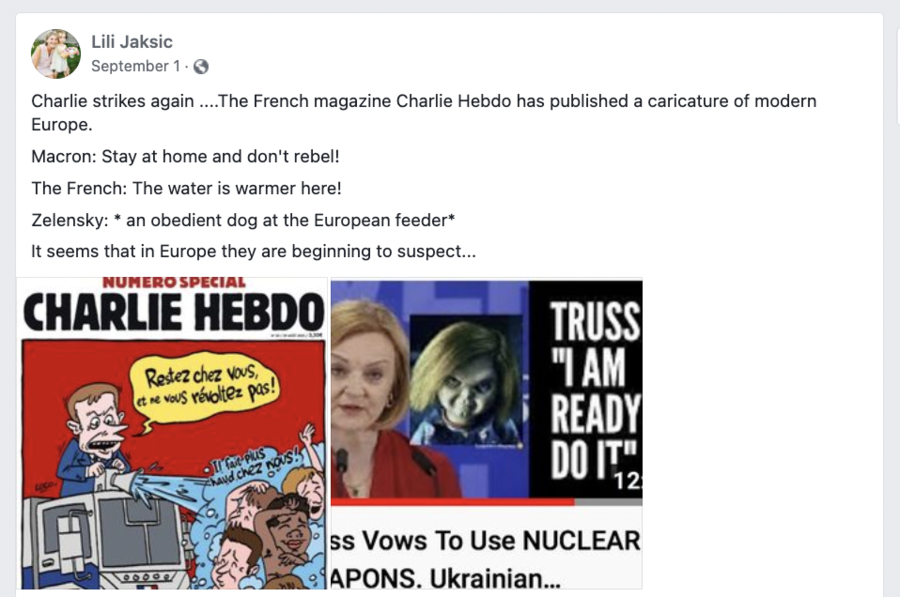 The entry contained two screenshots of the posts previously published by the same Facebook user: 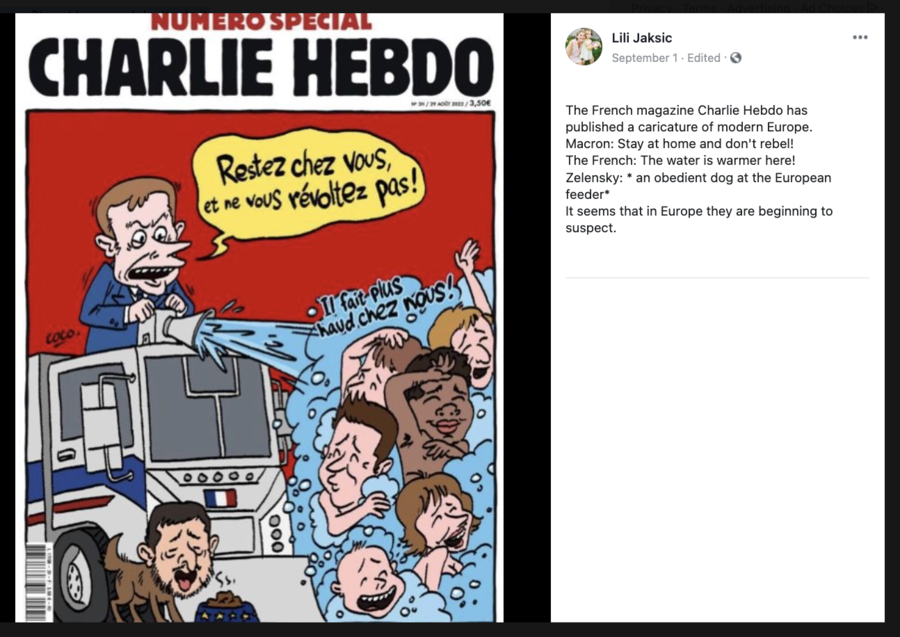 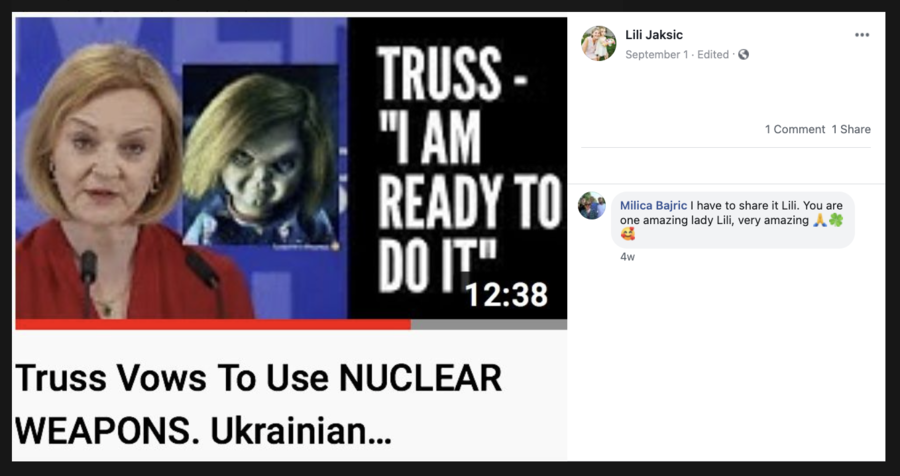 Two other fake cartoons that bear the Charlie Hebdo name and feature Ukraine's Zelenskyy as a dog also are circulating on social media. One shows Great Britian's King Charles III mourning the death of his mother, whose name has been changed to "Queer Elizabeth II." A second features a caricatured version of the United Kingdom vomiting out ex-Prime Minister Boris Johnson. The caption, which says "The celebration is over," incorrectly uses a masculine adjective to modify a feminine noun.

On September 23, 2022, Charlie Hebdo issued a statement rejecting these three covers, all labeled as a "special edition." The outlet expressed surprise that such propaganda "still works."

The weekly reported that the Charlie Hebdo cartoonist whose name was used on the fake "cover" displayed above -- Corinne Rey, also known as Coco -- became aware that images wrongly attributed to her were circulating on "pro-Russian Telegram channels" when a Russian freelance journalist, identified by Charlie Hebdo only as "Misha R.," alerted her via Instagram.

Other details also indicate that this cover is a fake. The issue date on the fake cover indicates that it was a "special edition" published on August 29, 2022. However, according to the magazine's website, it did not print anything on that day, and the cover of its August 31, 2022, issue was different: It discussed the beginning of the new school year, not the war in Ukraine:

As La Libération, a French daily newspaper, reported, Charlie Hebdo has not published a special edition at any time in 2022.

The fake covers also do not contain a bar code or the teasers for top content that would normally appear above the Charlie Hebdo title in authentic covers.

The three fake covers appear to have circulated among Russian, English, French and Italian-language accounts on social media. In mid-summer 2022, for instance, Russian-language accounts (archived here) displayed the cover showing Zelenskyy as a dog underneath an image of the UK vomiting up Prime Minister Johnson. That version of the cover did have a bar code, but did not highlight any content above the magazine's name. As with the other cartoons, nothing similar could be found on the Charlie Hebdo website.

Charlie Hebdo is a French satirical weekly that, in 2015, moved to the center of the international debate over freedom of speech after two gunmen attacked its newsroom, killing 12 employees, for the outlet's republication of cartoons depicting the Prophet Muhammad. For many, the magazine became a symbol of the right to that freedom.