Does a paper by Robert O. Young show that he conducted electron microscopy analysis on each of the four COVID-19 vaccines available in the United States and confirmed that there was graphene and parasites in all of them? No, that's not true: Graphene is not an ingredient in any of these vaccines. Analysis of the photos appearing in Young's paper show that some of the images were taken from other authors, date back to a time before the COVID pandemic and the development of these vaccines, and have been deceptively captioned as to what they represent.

On August 20, 2021, Young published an article on his website drrobertyoung.com (archived here) titled, "Scanning & Transmission Electron Microscopy Reveals Graphene & Parasites in CoV-19 Vaccines." That article is marked "16th Revision." On July 26, 2022, a review article (archived here) under the same title was published in the August 2022 Volume 6 Issue 8 of ACTA Scientific Medical Sciences Journal. On his Amazon.com author's bio page Young states that he is on the editorial board at ACTA Scientific. The article opens:

Abstract
Currently there are four major pharmaceutical companies who manufacture a SARS-CoV-2 now called SARS-CoV-19 vaccine. These manufactures and their vaccine are Pfizer--BioNTech mRNA Vaccine, the Moderna-Lonza mRNA-1273 Vaccine, the Serum Institute Oxford Astrazeneca Vaccine and the Janssen COVID-19 Vaccine, manufactured by Janssen Biotech Inc., a Janssen Pharmaceutical Company of Johnson and Johnson, a recombinant, replication-incompetent adenovirus type 26 expressing the SARS-CoV-2 spike protein. The intended purpose of these vaccines are to provide immunity from the so-called infectious novel coronavirus or SARS-CoV-2 virus now called the SARS-CoV-19.

The image below shows the title pages of the article as they appear on drrobertyoung.com (on the left) and actascientific.com (on the right) at the time of writing. The two editions are not identical. The format is different and not all the photos in the website article are in the Acta article and none of the embedded videos are in the journal. In this fact check, Lead Stories will make note of the specific edition when necessary.

Below is a Lead Stories composite image (It will open larger in a new window). On the left are two screenshots of unattributed images appearing in both editions of Young's article. Although the footnote numbers differ, they are captioned with the same sentence:

This is patently false. Through a reverse image search, a copy of the image was found on researchgate.net. It had been uploaded by John A. Stride, co-author of an article titled, "Gram-scale production of graphene based on solvothermal synthesis and sonication," originally published on December 7, 2008, in the journal Nature Nanotechnology. This graphene image has been online for almost 14 years, and Young represented it as a picture of nanobots present in the COVID-19 vaccines.

Lead Stories shared links to Young's articles with Stride, the director of teaching at the School of Chemistry of the University of New South Wales in Sydney, Australia. He responded by email on September 30, 2022:

I can confirm that Figure 28 of the ACTA Scientific Medical Sciences (ACTA) article in question appears to be reproduced from one of my papers (https://www.nature.com/articles/nnano.2008.365) & has been incorrectly attributed as being 'Hexagonal 'Smart' Versions of Reduced Graphene Oxide or Graphene Hydroxide Nanobots Found in the Pfizer, Moderna, Astrazeneca, and Janssen Vaccines! [23].'
My own Nature Nanotechnology paper was published at the end of 2008 and the material in question came about by rapid pyrolysis of a solvothermally-treated sample. It was most certainly not obtained from any biomedical process and is of a time much before COVID and related vaccines.

Below is another instance of a mislabeled image found in the article posted on Young's website. The text above the side-by-side comparison photos in the left panel reads:

The fine-print caption below the image, in the second sentence, appears to switch the word "left" for "right," since the image on the left has no "White Circles Indicating Cellular Degeneration as Seen in the Blood Clot." It reads:

Once again a reverse image search resulted in many identical matches to this side-by-side image, some dating back years. One duplicate found (the panel above on the right) came from Young's own website. It appears in a testimonial article titled, "From Terminal Cancer To Courage And A Self-Cure" (archived here). An even earlier copy of that article with the same image from May 13, 2018, on phoreveryoung.wordpress.com is archived here.

Inger Hartelius tells her story of being diagnosed with terminal metastatic lung cancer in 2011 and choosing not to have any chemotherapy or radiation. The testimonial describes how she looked for an alternative treatment and how Young did live and dried blood tests right in front of her at "Dr. Young's pH Miracle Center, in Valley Center, California." Hartelius seems to have been told that her blood had a lot of heavy metals in it, which she attributed to fish in her diet.

In the dries blood tests Dr. Young was focused on the patterns in which the blood coagulated. Experience shows that patterns can tell a lot about a person's health and current challenges and resources. In my tests it was clear that I had to focus on my immune system and my digestion. On top of that there was a sign that I had had a lot of heavy metals in my blood - maybe because of the long period in my life where I ate a lot of fish.

According to Young, in 2018 the above image showed heavy metals from Hartelius' diet of fish and in 2022 the same image shows an abnormal unhealthy red blood cell clot with multiple white round polymerized protein pools in a black rGO or graphene hydroxide soup.

Although Hartelius calls him Dr., and Young calls himself Dr. in the journal article and website name drrobertyoung.com, there is a note at the bottom of the testimonial that says in part:

[1] Robert Oldham Young CPT, MSc, DSc, PhD, ND, is a naturopathic practitioner and not a medical doctor. The titles after his name represent different doctoral graduations he has obtained in the USA where he has, among other things, studied nutrition, hematology, microbiology and chemistry. As a practitioner he has worked as an American Naturopath.

On June 29, 2017, the San Diego Union-Tribune reported, "Best-selling 'pH Miracle' author heads to jail." Young was convicted of practicing medicine without a license and on April 12, 2017, pled guilty. As part of the plea agreement Young signed the following statement:

There are at least two more commonly recycled images that are featured in both editions of Young's article about graphene in the COVID vaccines. These pictures appear online illustrating a wide variety of things, and Lead Stories was not able to determine their origin.

The healthy blood picture appears as a before-and-after image as an example of alkaline and hydrated blood vs. acidic and dehydrated blood, as 35 minutes after a foot bath treatment, after PEMF therapy, recovered with PEMF after working on a computer and as clean, organized blood as opposed to diabetic blood. Sometimes the image is rotated or cropped but it is the same image that has been recycled.

On the left side in the composite image below (image will open larger in a new window) are four screenshots. Two represent healthy blood and another picture (figure 26 on page 10 of the ACTA .pdf) shows what he calls the "Corona Effect" and "Spike Protein." Captioned:

[Figure 1a Micrograph under Phase Contrast Microscopy reveals the normal healthy state of the red blood cells which are even in color, even in shape and even in size. Red Blood cells in their healthy state measure anatomically 7 microns in diameter. Dr. Robert O. Young, Profiles in Medical Microscopy, Hikari Omni Publishing, 1987-2021]

[The corona effect and spike protein effect The Endogenously Created "Corona Effect" and "Spike Protein" ARE Caused by Chemical, Parasitical and Radiation Poisoning from Reduced Graphene Oxide or Graphene Hydroxide and Microwave Radiation! [21,22]. 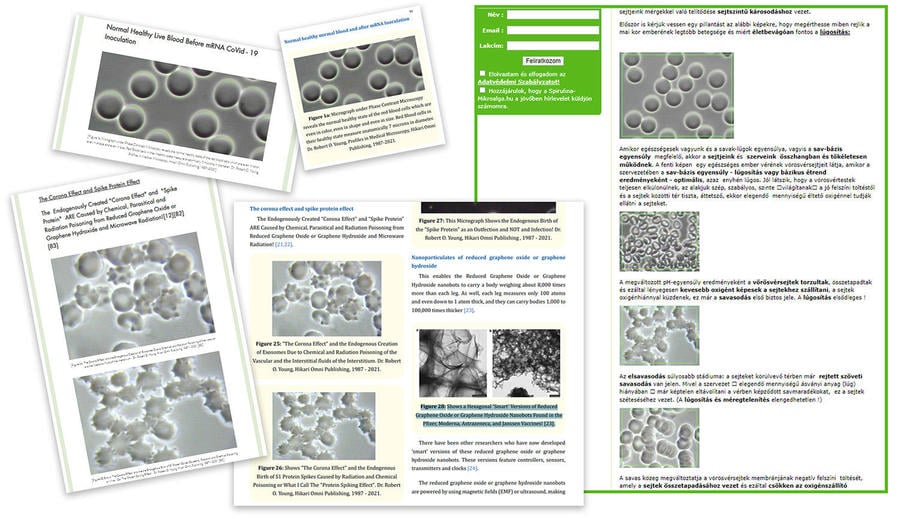 The panel on the right side, outlined in green, was posted in 2014 on a Hungarian language website spirulina-mikroalga.hu (archived here). The website is promoting a microalgea product (translation by Google Translate). The caption introducing the "healthy blood" image says:

When we are healthy and the acid-alkaline balance, that is, the acid-base balance, is appropriate, our cells and organs work in harmony and perfectly. In the picture above, you can see red blood cells in the blood of a healthy person, when the acid-base balance in his body - as a result of alkalinization or a basic diet - is optimal, i.e. slightly alkaline. It is clear that the red blood cells are completely separated, their shape is nice and regular, they almost "glow" from the good surface charge, and the space between the cells is clear and transparent, so they can supply the cells with a sufficient amount of life-giving oxygen.

For the picture that Young called "Corona effect" and "Spike Protien" from "Graphene Hydroxide and Microwave Radiation," spirulina-mikroalga.hu described it this way in 2014:

A more severe stage of acidification: hidden tissue acidification is already present in the space surrounding the cells. Since the body - in the absence of a sufficient amount of minerals (alkali) - is no longer able to remove the acid residues formed in the blood, this leads to the disintegration of the cells. (Alkalization and detoxification are essential!)

Lead Stories is not offering these alternative captions as if they represent the truth about the images; they demonstrate the images were recycled by Young, captioned with false information and existed before the COVID pandemic and the vaccines.

Lead Stories has debunked several false claims about graphene in the vaccines. The ingredients in the COVID vaccines, the history of the rumor and many of the claims that grew from it are summarized in this article.