Did the commander-in-chief of the Armed Forces of Ukraine, Gen. Valery Zaluzhnyi, wear a bracelet with a Nazi insignia? No, that's not true: The motifs and clasp on his bracelet resemble a design series that is marketed as a Viking Bracelet, and the charm in question is called a Solomon's knot.

It is an ancient design that has been used by many cultures, featuring two crossed links that are interwoven. The bracelet in question has been visible on several occasions when Zaluzhnyi has been photographed and interviewed. This is a "charm" style of bracelet where cast metal pieces can be threaded onto a leather strap fastened with a clasp. Due to the lighting and the resolution of the image posted online it is not possible to see all the details of the cast metal relief of the Solomon's knot.

On October 9, 2022, the Russian state-controlled news website, rt.com, published an article titled, "Ukrainian army's commander-in-chief poses with swastika bracelet" and posted a tweet with a link to the article. It featured a photo of Zaluzhnyi that had been posted on Twitter days earlier, on October 6, 2022, by the newly established, verified Twitter account of the commander-in-chief of the Armed Forces of Ukraine. On October 9, 2022, that photo and cropped closeups of the bracelet were posted on Facebook by the page Freedom From Mental Slavery with the caption:

But NATO insists there are no Nazis in Ukraine - as it floods the country with tens of billions of dollars of weapons and the Pentagon and CIA train and aid fighters on the ground . 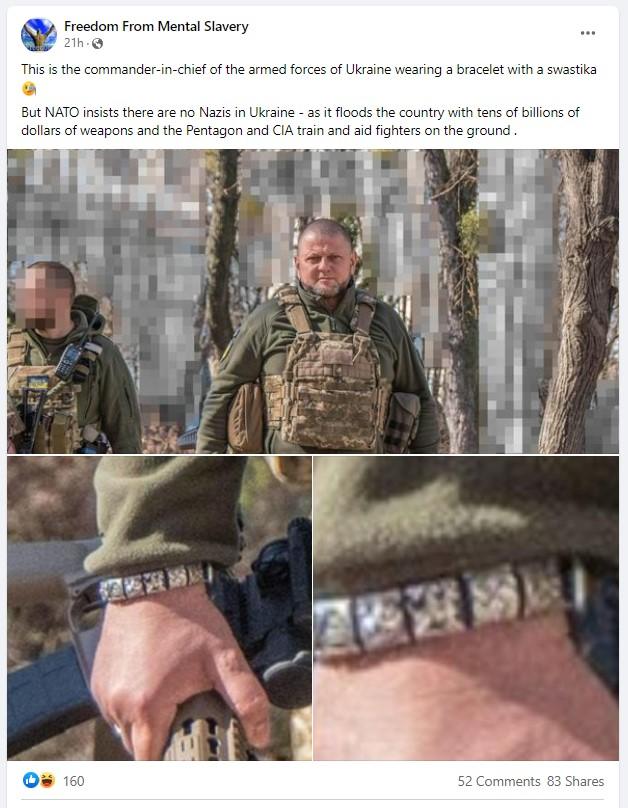 (Image source: Facebook screenshot taken on Mon Oct 10 19:00:24 2022 UTC)
This was not the first time this photo was published, it was posted on Twitter by the official page of the Ministry of Defense of Ukraine as far back as March 17, 2022. Zaluzhnyi is shown in a May 13, 2022, interview posted on YouTube, and in a composite image below, other photos (here and here) dating back to at least April 2022 also show Zaluzhnyi wearing the bracelet. A brief video on YouTube shows Zaluzhnyi wearing a T-shirt, the bracelet in plain sight, but the individual designs of the charms can't be made out. The clasp, which is visible in this video, matches the clasp style of the "Viking Bracelet" offered by an Etsy.com retail merchant. 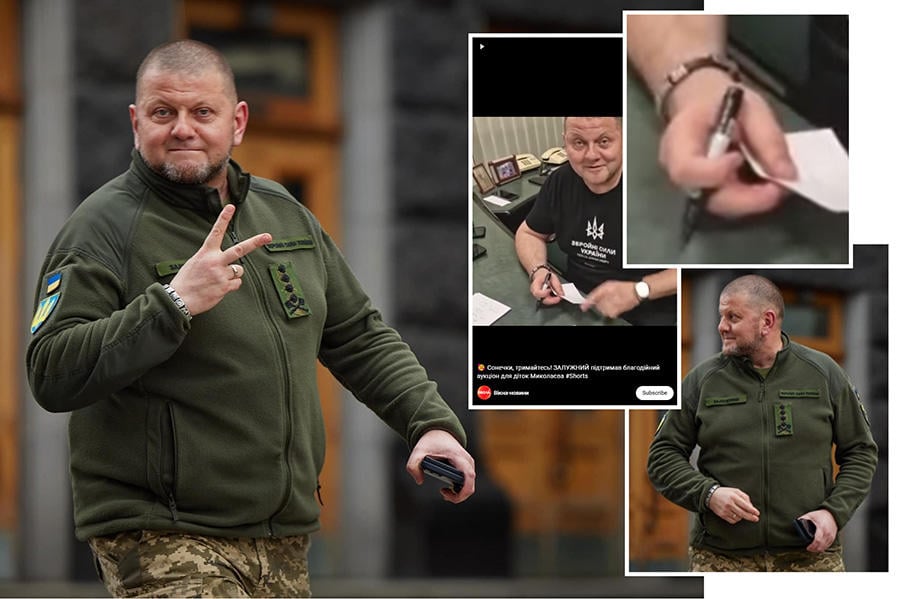 (Image source: Lead Stories composite image with YouTube, espreso.tv and 24tv.ua screenshots taken on Mon Oct 10 21:11:30 2022 UTC)
Below is the zoomed-in detail of the bracelet that was posted on Facebook. The insets below the corresponding charms in the original photo show an Etsy.com vendor's detailed images of two cast metal designs available for the "Viking Bracelet." The one on the left is labeled "Odin Sleipnir Hugin Munin Silver-plated Bronze Charm For Viking Bracelet." This charm shows Odin, a god from Norse mythology, riding the eight-legged horse Sleipnir, with the ravens Hugin and Munin flying overhead. The Solomon's knot piece is labeled "Scandanavian Pattern Silver Plated Bronze Charm For Viking Bracelet." 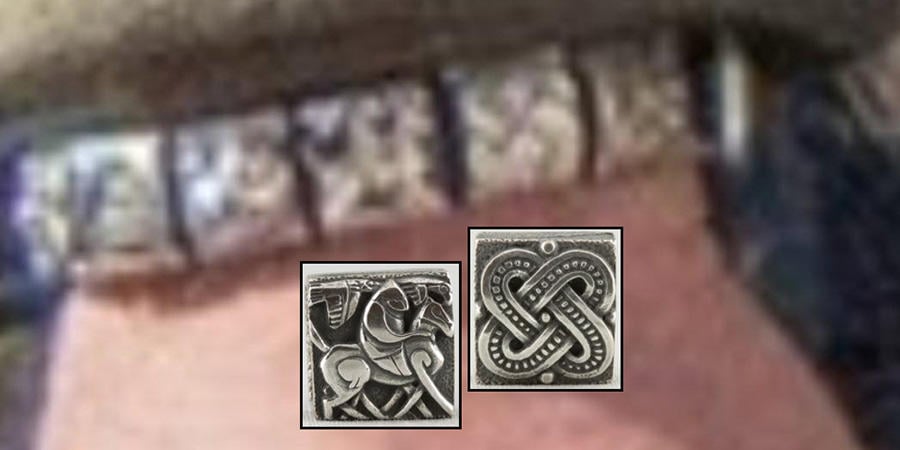 (Image source: Lead Stories composite image with Facebook and Etsy.com screenshots taken on Mon Oct 10 21:54:40 2022 UTC)
In knot theory, this knot is known as L4a1. An entry on The Knot Atlas at katlas.math.toronto.edu shows over 20 examples and variations of the link called Solomon's knot. An archived entry about the Solomon's knot by the Norfolk Medieval Graffiti Survey contains some examples of Solomon's knots found in the United Kingdom. The knot is described:

This design has been discovered in numerous churches all over Europe. Although it is an ancient symbol, appearing upon Roman mosaics from as early as the 4th century, it appears to have been adopted as a Christian symbol, appearing on a number of early fonts and stonework - such as the superb example located today at Sculthorpe church.